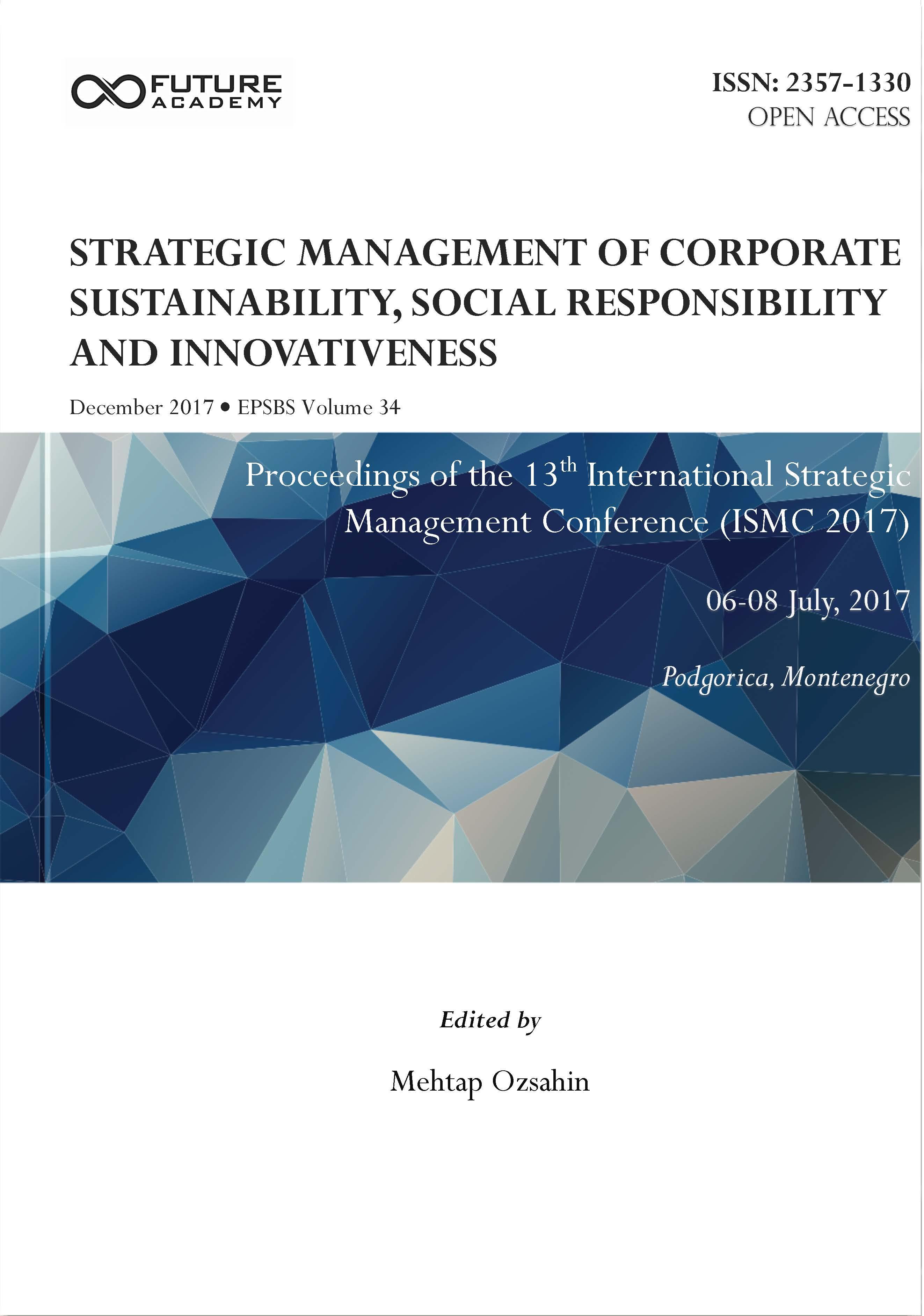 In particular, although from 1990s, Khan (1990, 1992); Weick and Roberts (1993); Harter, Schmidt and Hayes (2002); Schaufeli and Bakker, (2004) have made significant contribution on job engagement; Rich, Lepine and Crawford (2010) have made one of the first studies that are addressing this issue empirically. Rich et. al. (2010) aimed to reveal the relationship between job engagement and organizational factors together with business performance by developing the theoretical framework done by Kahn (1990). For this reason we also used this scale for our research, which was developed in the study of Rich et. al. (2010) and aimed at explaining the relationship between job engagement and performance.

Individuals participate in organizations with their own self-perceptions, and within the organization which is a social entity, they act and think with the influence of these self-perceptions (Dutton, Dukerich, and Harquail, 1994). In the same way, taking place of individuals within different social groups such as race, gender or team naturally develops as an extension of this self-perception (Breakwell, 1993). In other words, individuals enter into the social groups together with the characteristics of their own selves, rather than being abstracted from them. Organizations are also some sort of social groups in which people participate with their self. According to Tompkins and Cheney’s (1985) definition of job engagement, which is amongst the first definitions done in the literature, it is the perception of organizational engagement that individuals share their success and failure with the organization, feel sense of belonging, and also as an individual or group within the organization.

Kahn (1990) defines job engagement as a unique and important motivational factor that allows the individual to give his/her physical (behavioral), cognitive, and emotional energy to the work he/she does. Moreover, it is also defined as the level of attachment to the organizational characteristics of the content of self-context (Tüzün and Çağlar, 2008). It is the positive, fulfilling state of mind, most commonly characterized by vigor, dedication, and absorption (Halbesleben & Wheeler, 2008).

According to Grumman and Saks (2011), there is a direct relationship between job engagement and job performance. Moreover, engaged employees are likely to perform extra-role behaviors, perhaps because they are able to “free up” resources by accomplishing goals and performing their tasks efficiently, enabling them to pursue activities that are not part of their job descriptions (Christian et. al., 2011). In addition, according to the findings of Bakker et. al.’s (2012) research on workers with proactive personality, proactive personality had a positive relationship with in-role performance through job crafting and work engagement. According to Gabler et. al. (2014), while job engagement increases sales performance, low job engagement leads to a decline in sales performance. Finally, employee engagement have a significant impact on employee performance (Anitha, 2014).

There is a significant relationship between emotional engagement of employees with the organization and organizational performance.

Saloyev and Mayer (1990) describe emotional intelligence as “reflecting the individual's own or others’ feelings and emotions, distinguishing them from each other, and using this knowledge in the dimension of thought and action”. On the other hand, Goleman (1998) describes emotional intelligence as the ability to sense one's own feelings, to empathize others, and to adjust their emotions to enrich their life. Emotional intelligence is also defined as “the personal, emotional and social competencies and skills that will help the person to successfully cope with the pressure and demands of community” (Doğan & Şahin, 2007).

The first dimension of the four-dimensional WLEIS is self-emotional appraisal, relating to the ability to understand and express one's feelings; the second dimension is others’ emotional appraisal, which is the essential feature of the perceived and meaningful dimension of the people's emotions. The third dimension of this scale is regulation of emotion, which is the ability to adjust and manage the emotions of the individuals. Finally, the fourth dimension is the use of emotion and this dimension concerns the use of one's feelings in constructive (positive) activities and in enhancing personal performance (Wong and Law, 2002).

The effects of this four-dimensional emotional intelligence on organizational performance are addressed in the studies mentioned above. In this study, the density of the moderator role of emotional intelligence on the relationship between job engagement and organizational performance is investigated. As a result of the analysis of the relevant studies in the literature and theoretical framework;

The questionnaire method was used to collect research data by face-to-face interactions. Exploratory and confirmatory factor analyzes were carried out to determine whether scale validity and reliability analyzes and questionnaires constituting the research scales form the predicted factor structure. Then the research model and related hypotheses were tested with structural equation model. The total number of participants for this study is 314 people who are working in organizations in different levels. Emotional intelligence scale was used by KS Law, Wong and Song (2004) and job engagement scale belongs to Rich, Lepine and Crawford (2010) and lastly organizational performance scale was used by Prieto and Revilla (2006).

Our research model is shown below;

Validity and Reliability of Factors

Exploratory Factor Analysis (EFA) is applied to determine whether the theoretically predicted variables making up the scales were separated into predicted factor components. Principal components analysis and promax rotation methods are used in the exploratory factor analysis. For testing the suitability of the data set for factor analysis; Kaiser-Meyer-Olkin (KMO) sample adequacy test and Bartlett sphericity test were applied.

As a result of the analysis, it was found that the KMO value for this study is 0.923 which is above the desired level of 0.50 and the Bartlett test is significant at 0.001 significance level. In addition, the diagonal values in the anti-image correlation matrix are looked at and these values are found to be over 0.5 as it should be. Accordingly, it has been found that sample data is suitable for the factor analysis.

In the exploratory factor analysis, the lower limit of factor loads was accepted as 0.5 considering the sample size. The communality values of all variables are above 0.5. The Cronbach's Alpha value was used to measure the internal consistency of the factors, and each factor exceeded Cronbach's alpha coefficient of 0.7. Accordingly, it is revealed that the factor structures have internal consistencies.

Confirmatory factor analysis (CFA) was conducted using the Maximum Likelihood estimation method to verify the results of the EFA, to analyze the validity and reliability of the research scales. Modification indices are examined and error values with high modification value in the same factor are combined with covariance. In this instance, the fit index values are examined as follow; X2/df = 1,886, GFI=0,838, TLI=0,917, CFI=0,926, PNFI=0,768, RMSEA=0,053 (Hu and Bentler,1999; Schumacker and Lomax, 2012).

Convergence validity is obtained since all factor loads were statistically significant (Bagozzi, Yi, Lynn, 1991) and factor loadings were higher than 0.7 (Hair et al, 2010). In addition, unidimensionality (Anderson and Gerbing, 1988) is also being provided because the goodness of fit indexes are at a good level.

Average Variance Extracted (AVE) (Fornell and Larcker, 1981) and Scale Composite Relability (SCR) (Bagozzi and Yi, 1988) values were used to test the reliability of the factor constructs. When AVE value is greater than 0.5 and the CR value is greater than 0.7, it is possible to say that the relevant factor has validity and reliability (Bagozzi and Yi, 1988). The AVE and SCR values of research factors are given above. Accordingly, the validity and reliability of the factors were found to be at the desired level. Correlations of factor variables are given in Table . Accordingly, it is found that the interrelationships between the variables are sufficient and statistically significant.

In this study, structural equation modeling is used to test hypotheses. The structural equation model developed to investigate the effects of physical, emotional and cognitive engagement on organizational performance is given below at Table . The fit values of the model are of the following form; Model 1 Fit; X2/df = 2,018 GFI=0,890, TLI=0,931, CFI=0,943, PNFI=0,735, RMSEA=0,057 which are all at an acceptable fit.

There are multiple methods of statistically presenting the existence of the moderator effects. In this study, moderator variable effect is analyzed using multiple group comparisons and chi-square difference test over the structural equation modeling infrastructure. This method has validity as they are used in many management and organizational studies (Wagner, 2011; Jiménez-Jiménez and Sanz-Valle, 2011).

The results of the structural equation model which is designed to test the possible moderator effect of emotional intelligence on the relationship between job engagement and performance are given below (Table ). It can be shown that in both models, the model fit values indicate an acceptable fit.

Model 3 is created to understand from which job engagement sub-dimension creates the moderator effect. According to the results, there is a significant differentiation between low and high emotional intelligence levels only on the relationship between emotional engagement and performance (EQL; 0,265*** EQH; 0,393***; 6,76**). For this reason, while H2b and H2c are not supported, H2d is supported.

Performance measures are based on subjective perception, which is a limitation for the study. The use of objective performance measures are recommended in the future studies. Also, there are some shortages for generalization because the study has a cross-sectional study area. In order to overcome this deficiency, it will be useful to carry out studies involving employees from different sectors and longitudinal studies. Research on the role of different individual and organizational elements (cultural intelligence, organizational support, leadership etc.) in the relationship between job engagement and performance is a recommendation that will contribute to the development of the literature.