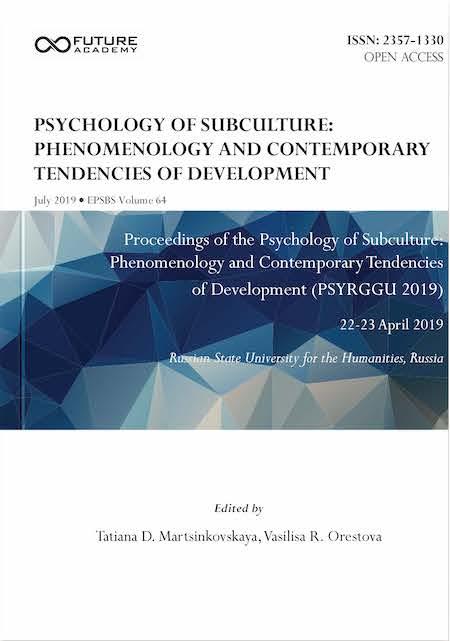 The relevance of the study is determined by the need to analyze the methods and techniques for translating ancient Chinese philosophical texts into Russian. The object of the research is the Russian translation by Popov of one of the main works of Confucianism (). Translation made by Popov is the first in history complete translation of into Russian, the technique and methods of transferring philosophical thought of which from Chinese into Russian certainly deserve a detailed analysis. The subject of research is the lexical and syntactic units of the text, techniques and methods of preserving Confucius ideas when translated from Chinese into Russian. The aim of the research is to analyze the possibility of accurate rendering of the original text from Chinese into Russian. The research task is to study the possible practices of translating ancient Chinese texts into the Russian language. The methods of analysis are determined by the purpose and task of the research; the study is based on the method of linguistic analysis of Confucius text, the method of comparing the accuracy of translation of sentences from Confucius treatise into Russian, and the method of continuous sampling for the study of semantic and metaphorical units.

When it comes to translation, we cannot avoid the question of how to translate, which is inevitably related to translation goals, methods, strategies and other factors. The term strategy was borrowed from military science. Initially, it referred to the general planning of military operations, including consideration of all military or non-military factors. Many modern disciplines such as economics, psychology and political science, having borrowed this term, use it in a metaphorical sense. The term translation strategy is widely used in modern translation research to describe the translation process.

Lun Yu treatise is one of the classical Chinese philosophical texts, which had a great influence on the development of philosophy, politics and other areas of humanitarian knowledge. At the beginning of the 18th century, due to the lack of Russian translations of ancient Chinese philosophical and literary works, researchers used translations of texts from European languages, which made it difficult to understand these works. Thus, it was impossible to obtain a comprehensive, deep and accurate understanding of the essence of Chinese linguistic culture, philosophy and classical Chinese literature. Russian translations of the classical works of Confucianism appeared in the late 18th – early 19th centuries. In the 20th century, translations of philosophical texts and the ancient Chinese texts themselves, became the object of linguistic research.

The article focuses on Popov’s translation strategy, his methods and techniques for transferring meaning from ancient Chinese to Russian and the interpretation of Confucius ideas.

A philosophical treatise presents a certain difficulty for an unprepared reader, especially if the text is translated into another language. The treatise is also difficult for the translator, because the peculiarity of is the lack of the text structure; we have an impression of scattered parts of the text and the absence of a common plot line. In addition, when translated into Russian, the philosophical sayings of Confucius require additional cultural commentaries or a complete transformation of sentences.

treatise does not have a strict order of chapters; this philosophical treatise is characterized by a lack of structure: the same sentence may refer to different parts of the text. is differentiated by multidimensionality and duality, seeming absence of logical chains, therefore the meaning of the same sentence can be understood in different ways. All this creates a certain difficulty for translators who work with the text of the philosophical treatise. There are various options for translating, including translations into Russian.

The article discusses the methods of translation by Popov, with the help of which he made it possible to preserve and convey the meaning and ideas of Confucius.

From a linguistic point of view, a translation cannot be 100% equivalent to the original text, even if the translator considers it necessary to keep 100% of the original text (Xin Na, 2019, p. 100). Moreover, translators need to overcome linguistic, cultural and temporal barriers. Thus, a number of objective difficulties arise in translating the text of Confucius, one of the problems is the misinterpretation of the very ideas of Confucianism and, as a consequence, their erroneous translation.

This article is to comprehensively study a number of issues: the strategy of translation of the classical Confucian text into Russian, performed by Popov; the main ideas of the philosophical treatise of Confucius and their rendering into Russian; selection of lexical and stylistic means for more accurate preservation of meaning.

The purpose of this research is to study the technique of translating ancient Chinese texts into Russian, to assess the accuracy of conveying the meaning of a philosophical text, and examine techniques and methods of preserving Confucius ideas when translating from Chinese into Russian.

Confucius (551 – 479 BC) is an ancient Chinese philosopher and thinker, the founder of Confucianism. Confucianism is a Chinese philosophy, a religion that has existed for over two thousand years. At present, the idea of ​​Confucianism is viewed as an active spiritual force and a code of behavioral norms that structure Chinese society, order the development of society in the conditions of people’s self-control (Perelomov, 2004). One of the main books of Confucianismwas written by the students of Confucius in the early Zhanguo period (476/403 – 221 BC), the treatise contains records that literally convey the sayings of Confucius.

treatise, which has gained fame all over the world, has more than 40 translations into English. In Russia, the study of Confucianism has not been widely discussed. For the first time, Confucian works were translated at the beginning of the 20th century by Popov and were well known to a small circle of Sinologists (Bubnova & Wang Yong, 2011, p. 122). Currently, there are more than 14 versions of the translation into Russian (Wang Lingzhi, 2011, p. 116).

In the Chinese language, the hieroglyphs论语 ‘lúnyǔ’ have a meaning of a code for guiding people’s behaviour in life, politics, military affairs and other areas. Literally, the treatise is translated as ‘Judgments and Conversations’, the second common name is ‘Aphorisms of Confucius’.

The strategy of translating the philosophical treatise Lun Yu into Russian

A translation strategy is a macro method for carrying out translation activities, which is formed on the basis of the general method of bilingual communication between translators in a certain communicative situation (Sdobnikov, 2011, p. 165).

Despite the fact that translation theorists generally recognize the principle of translation equivalence, in practice not everything is so simple. There are two approaches to translation. In the first approach, the translator strives to convey the source text into another language as accurately as possible. This type of translation includes both literal translation and taking into account cultural realities, traditions, cultural connotation when rendering one linguistic form into another cultural-linguistic form. The second approach is to transfer content in one language into the so-called artistic linguistic form, in which the form and content are strongly transformed.

Let us further consider the technique of translation of Confucius philosophical treatise from Chinese into Russian in sections 6.3, 6.4 and 6.5.

When translating the text of treatise, Popov preserves rhetorical questions as an element of the structural grid of a philosophical work.

An example of a translation of a rhetorical question made by Popov is considered in Table 1.

The translator preserved word combinations and syntactic modality of sentences in the translated text, namely, the rhetorical questions of the original text, in order to achieve the preservation of the rhythmic structure of.

Treatise actively uses metaphors. The goal is to describe the different points of view of Confucius himself, morality, education, politics, history and philosophy (Chen Huihui, 2018, p. 188). Here are some examples:

Originally, the hieroglyphs白圭 [bái guī] are borrowed from the Shih Ching and mean ‘a ritual vessel made of white jade’ in ancient China. Popov supplemented the translation with an interpretation, explaining that the stain on the white jade can still be erased, but the stains in our words cannot be removed. With the help of a metaphor, Confucius conveys the idea that an honest person’s words should be clear, without stains, and clearly express the meaning. See table 2.

In this example, 器 [qì] means ‘dishes, tools’. Confucius believes that one must be a literate person, have a wealth of experience and knowledge in order to govern. See table 3.

The metaphors cannot be accurately translated without context. Without additional interpretation, literal translation of metaphors leads to semantic ambiguities. Popov adds notes and reference materials that are missing in the original. However, notes and additions, in turn, complicate the compositional and semantic structure of the original text, and its simplicity is lost.

Popov translates 仁 [rén] in two ways as and, uses the same root words humanist, humanity, rarely – philanthropy. In Christian culture, love means love for God, for all people; the concept of humanism appeared in the 15th century during the Renaissance, initially it was the humanistic education system that contributed to the maximum development of human potential. 仁 [rén] is the core and essence of the ethical category of Confucius, which permeates the entire system of thought of Confucianism. However, Confucius does not give a clear definition of notion仁 [rén]. According to Confucius, 仁 [rén] is a sophisticated complex of concepts, conveyed in one word: love for a person, respect for oneself, masculinity, reticence and humanity. It also has a wide and ambiguous meaning. See tables 4 and 5.

In Russian linguoculture, the meanings of the words andhave common semantic components with the hieroglyph仁 [rén], but there are significant differences.

In Confucianism, 仁 [rén] is a sophisticated complex of concepts that includes,,, and. Popov uses the words and to convey the meaning of the hieroglyph仁 [rén].

Let us now consider some examples of the translation of the term道 [dào].

Popov translates the word道 [dào] as,. The term道 [dào] is an important semantic dominant of the concept. The concept道 [dào] includes the origin of all things in the world, the regularity of things, the norms of life and the principles of business. Popov translates this hieroglyph in a few words in order to convey its meaning as accurately as possible. See tables 6 and 7.

The difficulty of translating Chinese philosophical terms lies primarily in cultural differences. Popov adheres to the second approach when translating the text of Confucius: he seeks to convey the meaning, and not to make a literal translation.

The analysis showed that in the translation by Popov, ancient Chinese realities are often conveyed through objects of Russian culture.

In Russian translation by Popov, there are traces of stylistic means of imitation of the original text, but his translation is replete with linguistic comments, which creates semantic redundancy and difficulty in reading, since his translated lines are much longer and differ significantly from the style of the original. To bring the translation in line with the religious knowledge and cultural traditions of the Russian reader, Popov translates Confucian concepts through Christian realities. Thus, the analysis showed that Popov used two approaches when translating Confucius text. To convey philosophical terms and metaphors, the translator significantly adjusts the form and their meaning.

The original text uses rhetorical questions that Popov preserves during translation in order to convey the structure of the original philosophical text in the Chinese language.

This paper has been supported by the RUDN University Strategic Academic Leadership Program.