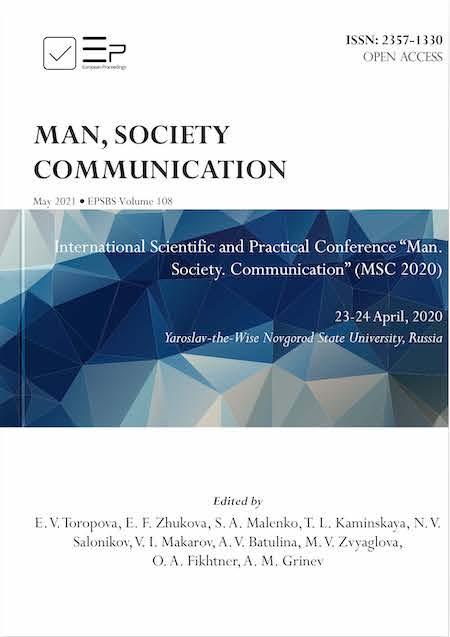 The language is considered to be recognized as a display of received information. The article deals with different ways of verbalization in the language due to pragmalinguistic analyses of speech behaviour. Verbal behaviour is also studied from different points of view, however here we deal with mechanical verbal activity when the speaker selects speech units automatically, the psychological mechanism of his choice may be unintentional or habitual. Thus, verbal habits appear and they form automatical speaker’s verbal behaviour. In order to study this mechanical verbal behaviour of a speaker a system of pragmalinguistic experiments based on speech strategies of implicit influence has been developed. This branch is called implicit pragmalinguistics, whose object is to study verbal communication (speech behaviour) and to identify the speech portrait of the speaker. Speech behaviour is actualized in the text in the form of a small syntactic group - Predicative-Modal Group, which are shown in the article. In studying the verbal behaviour we use statistical methods, in particular the modified method of content analyses where we look at the percentage of categories and make up speakers’ portraits. Interpretation of the verbal portraits leads to the identification of individual features of the speaker, which are thoroughly examined and shown in this article.

Language and speech have remained comprehensively studied and still insufficiently studied problems. This is primarily due to the complexity of these phenomena, where speech is the focus and expression of the entire mental life of a person. Sometimes speech may be aggressive, Selyutin (2019) has analysed the cases of communicative aggression use in the speech. The direction which is intensively engaged in the analysis of speech problems is pragmalinguistics. Pragmalinguistics is defined as the science that deals with the choice of the most optimal means available in the language for the most successful impact on the listener, for the effective achievement of the intended goal in the specific circumstances of speech communication. The main task of pragmalinguistics is to study the language as the way of influence. Language is a variety and shape of human activity, which makes it possible for people to think of the past, present, and future situations and make plans related to them. As a mode of thought, it is not just an instrument, which conveys and receives messages. It enables an individual to pass and get responses from natives in one`s own and foreign speech communities (Dobrikova, 2019).

Recently, the efforts of linguists have been directed to the study of speech messages, taking into account the speech impact as the most important means of human communication (Agapova, 2002), which can be limited and not, as the social media could be used as a medium for progress of the human where access to ideas and opinion has no boundaries and information would be unlimited (Ahmad et al., 2018). The context of language functioning has been expanded, and it has been considered taking into account such factors as opinions, attitudes of the speaker and listener, their social status, ethnicity, etc. The motivation, being considered from the point of view of generating a verbal system, is a consequence of the speech situation itself (Albekov et al., 2019). In the study of speech communication there was a so-called "pragmatic turn", the beginning of which is associated with the works of J. Austin, H. Grice, G. Serl (Searle) and with the works of Russian psycholinguists developing the theory of speech activity. Language emerged on the crossroads of culture, cognition and communication and its cultural specificity is imprinted both in its systemic features and in the verbal behaviour of its speakers (as cited in Kozlova, 2018).

The basic concept of pragmalinguistics is the theory of speech influence. Speech influence is understood as the influence on the person and behaviour of a person in order to form and regulate his/her behaviour. In a particular speech message, the effectiveness of speech influence depends on the perception of his listeners, his understanding and interpretation of the statement. The same statement may produce a different effect on the listener. Speech influence has two kinds: the orientation to the motifs and the orientation to the listener. The motive refers to the motivation to work, associated with the satisfaction of certain needs. This kind of speech influence falls into three motives: the requirement, the message, emphasis. It is also necessary to consider the direction of the impact.

If the choice of language means is not realized either by the sender or by the recipient, then we deal with the hidden speech influence and with the actualization of the implicit intention. Speech activity is characterized by clear intentions and goals of the sender of the text. The sender wants to have some impact on the recipient, s/he consciously influences the listener by choosing certain speech means. Text here becomes a verbal message to public; its meaning should be open and clear to be persuasive (Baryshnikova et al., 2017). However, sometimes the speaker chooses the same grammatical phenomenon too often, this choice turns into his/her speech habit(s), and from these speech habits develops speech behaviour of the speaker. In the case of verbal behaviour, the speaker selects speech units automatically, this choice is mechanical and has no conscious motivation, the motives and goals of the utterance are deeply rooted in the subconscious (Matveeva, 2013). Speech behaviour is actualized in the text in the form of a small syntactic group - Predicative-Modal Group (PMG). The behaviour can change because social and biographical factors influence the structure of the associative field (Yakovlev, 2018). The speech nuance of meaning. In language the PMG is represented by a simple non-proliferation sentence or part of a complex sentence, and in speech, the PMG is a statement or part of it (Matveeva, 2013), with the frequent choice of speech signals (PMG) "nuances of meaning» are actualized. The speech nuance of meaning is a usual choice of speech signals of grammatical categories. In the hidden speech influence there are two types of speech strategies. These types are determined by the action of the sender's orientation or the focus on the recipient of the text as part of the speech act.

Frequent use of these speech habits carries information that reports some information about the author, and his/her speech behaviour. The verbal habits or the nuances of meaning discover the speech behaviour of the speaker. By noticing these verbal habits, the listener can draw a conclusion about some personal qualities of the speaker. Reason to suppose that language emerged on the crossroads of culture, cognition and communication and its cultural specificity is imprinted both in its systemic features and in the verbal behaviour of its speakers.

There are several strategies of speech behaviour, according to which it is possible to make a speech portrait of the speaker. A speech strategy is a combination of speech actions aimed at achieving certain communication goals; the whole process involves certain speech production planning and depends on communication circumstances, personal features of the involved participants and the way the plan is realized (Titova, 2018).

Each of the strategies is presented in the form of two or three plan-variants. «The strategy of participation/non-participation of communicants in a speech event» has one of the three verbal plans: personal, social, informational.

The strategy of certain / uncertain behaviour of the author in a speech event» is actualized in the text in the verbal plans of categorical and non-categorical approval. The main speech signal of categorical approval is the category of time. However, this strategy can be actualized not only by means of verb forms. The same reality can be presented to the speaker as one that evokes his/her different emotional attitude and is evaluated from different sides. This reality in the message can receive different emotional characteristics. The speaker can refer to reported differently. In the discursive struggle, where the main rhetorical rule is to win the dispute, to convince the opponent, manipulative techniques are used as an acceptable means to achieve the goal (Labutina & Topchii, 2019). The strategy of formation of the recipient's attitude to the speech event by evaluation. The "evaluation" reflects the relationship between the participants in the speech act (Ivin, 2010). There are two types of evaluation: sensory and normative. The sensory evaluation comes from the feelings of the speaker and falls into positive and negative evaluation. Positive evaluation component are words that describe positive emotions (Moshchanskaya & Kavardakova, 2018). Positive is actualized by the speaker if the message expresses satisfaction, preference, approval, reliability, praise, recommendation. Negative if the message actualizes discontent, condemnation, disapproval, unreliability (Naumenko, 2003).

6.1. The results show that the authors almost equally actualize the markers in social plan, negative evaluation and emphatic (accentuated) plan.

6.3. The general characteristics of the professional group of authors-psychotherapists: a psychotherapist is an extrovert, which means he is involved in the world of people and things around him. The therapist's lifestyle is his connection to the outside world. The authors are determined, confident people, but they do not impose a subjective opinion and show restraint.

Summing up all the above, let us emphasize once again that language is a means by which a person regulates his relations and relationships with the world around. Human language skills for successful communication and achieving the result in this communication it is the subject of study of pragmalinguistics. As we found out earlier, the study of speech communication, which includes implicit speech behaviour, speech influence and speech habits, has been and remains an urgent problem of linguistic and psychological research. Recently, a sufficient number of speech strategies and speech markers (signals) have been identified to achieve the successful (from a pragmatic point of view) impact on the recipient of the text to create a speech portrait of the speaker. Speech behaviour of any individual is unique in its essence, because it is due to the peculiarities of his/her place of birth, nationality, upbringing, education, sex and social status, the environment in which he/she is accustomed to.