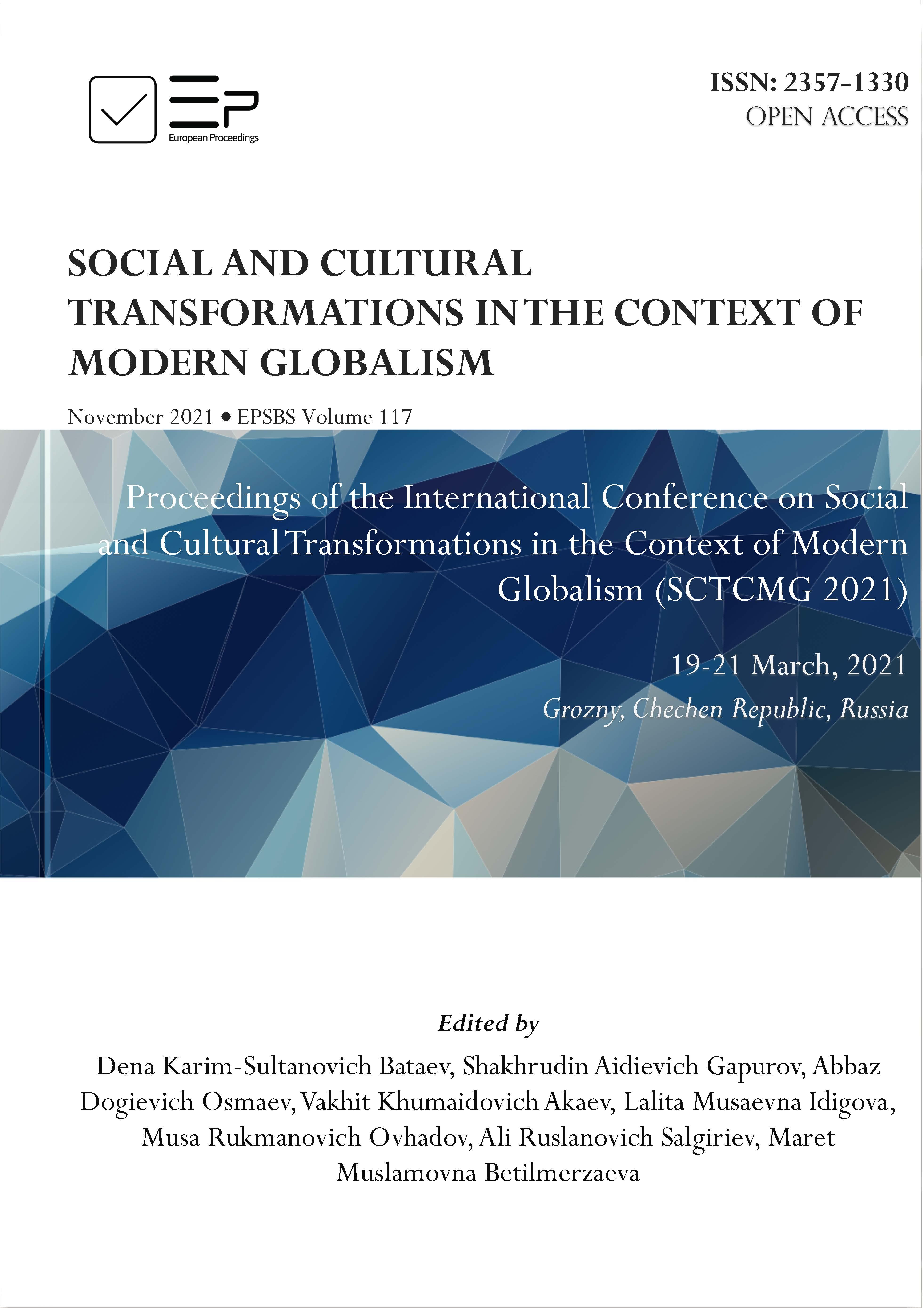 Research in the field of bilingual processing of lexical units indicates that access to lexical information in the mental lexicon is non-selective in relation to the language, in other words, the word representations of both languages become active when they are recognized. The experimental study was aimed at testing whether the hypothesis of indiscriminate access is consistent for trilinguals and three languages, and uncovering the role played by proficiency in a second language in acquiring a third language. Thirty-three North Caucasus Federal University students studying German as a third language, who started learning English (L2) as a foreign language in high school, completed the task of recognizing translations of words from Russian (L1) to German (L3). Experimental material included Russian-German, English-German, Russian-English-German cognates, non-cognates, and control words. The participants were divided into two groups depending on the level of English proficiency L2, which was determined based on academic performance and data from questionnaires on the experience of learning a foreign language. As expected, both groups of participants showed faster reaction times (RT) and higher accuracy in recognizing cognates, in addition, Russian-English-German cognates were processed faster than Russian-German and English-German cognates. The experimental results are consistent with the hypothesis of indiscriminate access to lexical information, which implies that all multilingual languages can affect the activation and recognition of words. The experiment did not reveal significant differences in reaction time (RT) and error rates between the two groups of students with different levels of English proficiency L2.

The process of mastering three or more languages is a relatively young area of psycholinguistic research. However, the growing amount of experimental data on this topic indicates differences between mastering a second and a third language and postulates specific features of the processes of learning a third language. Scientists are inclined to believe that the acquisition of a second language (L2) must be distinguished from the acquisition of a third language (L3). Herdina and Jessner (2002) argue that multilingualism not only produces a qualitative shift, but also leads to a significant change in the quality of the speaker's language system (s). Groshzhan believes that a bilingual cannot be viewed simply as the sum of two complete or incomplete monolinguals; rather, he or she has a unique and specific linguistic configuration (Grosjean, 1992), thus it can be argued that a multilingual is neither a sum of three or more monolinguals, nor a bilingual with an additional language. It is obvious that the presence of two or more previously mastered languages can lead to a more complex interaction between multilingual languages than pure bilingualism. In the case of bilingualism, the cross-linguistic impact on the target language can only be due to the presence of one non-target language, while in trilingualism or multilingualism, any of the non-target languages, or several of them at the same time, can have a cross-linguistic effect.

Experts have identified a number of factors influencing the development of the third and additional languages. The most important of these are cross-linguistic interactions between languages, as well as the level of proficiency in each of the languages, the order of acquisition, the age and degree of linguistic awareness of those who learn the language (Cenoz & Genesee, 1998; Cenoz, 2001; Grosjean, 2001, Jarvis & Pavlenko, 2010; Kellerman, 1995; Szubko-Sitarek, 2012). A research on the acquisition and use of a third language (L3) has shown that a second language (L2) plays a special role in the trilingual system. Third language students do not rely on their first language, as one might expect, but mainly on their second language L2 (Cenoz, 2001; Jessner, 2008; Wei, 2003).

This trilingual situation raises questions about how the words of the three languages are stored and activated in the minds of users. This is why much of the research has focused on the mental vocabulary, “the central unit of natural processing, its structure and functioning” (De Bot, 2004, p. 18). Harley (2010) argues that the first step in understanding both oral and written processing is to “refer to words with words, since words are the building blocks of language” (p. 37).

The most acute issues in the study of the mental vocabulary of bilinguals are the issues of separate or integrated storage of lexical information and selective or non-selective access. While several studies have provided evidence for the existence of a shared lexical memory system in which both languages are activated simultaneously during language processing (Costa 2005; Dijkstra et al., 2000), other studies have supported the notion that the two lexicons are kept separate, and activation of one language does not entail activation of another (Gerard & Scarborough, 1989; Scarborough et al., 1984). Recently, there has been a consensus that the two bilingual languages are indeed integrated (Costa 2005; Dijkstra & Van Heuven, 2002; Kroll & Stewart, 1994; Pavlenko, 2009); however, the very idea of how this integration takes place is still under discussion.

One of the key pieces of evidence for non-selective access to vocabulary in the bilingual mental vocabulary is the cognate facilitation effect (Dijkstra & Van Heuven, 2002; Dijkstra, 2005). Cognates are translation equivalents that have common forms and meanings in different languages (for example, the word finger is a cognate for English, German and Norwegian). Many studies of bilinguals using different experimental tasks have shown that cognates are processed faster than monolingual control words. However, it is still unclear whether the high degree of interlanguage interaction found for bilinguals extends to the three languages. Dijkstra and Van Heuven (2002) showed that trilinguals who performed the lexical decision test in their native language (Dutch) were more likely to recognize words that were cognates in their second language (English). In addition, participants with a higher level of proficiency in a third language (French) also recognized Dutch words that were cognate of a third language faster. This result suggests that all three languages of the participants played a role in the word recognition process, supporting the hypothesis of indiscriminate access to the language.

In the Russian context, the study of the mental vocabulary of multilinguals and the role that cognates play in its organization and processing are rather limited. Therefore, the purpose of the study was to study this dynamically developing area and test the applicability and generalizability of the research results in the Russian context.

The aim of the study was to answer two questions:

The experimental study was aimed at testing whether the hypothesis of indiscriminate access is consistent for trilinguals and three languages, and uncovering the role played by proficiency in a second language in the acquisition of a third language.

To investigate whether the non-selective access hypothesis extends to three languages, unbalanced Russian-English-German trilinguals were asked to perform a translation recognition test in their third German language L3 (Sunderman, 2014). Stimulating materials included German control words, Russian-English-German cognates (REG) with the same form and meaning in three languages ( Russian-German cognates (RG), which forms are the same in Russian and German, but not in English (), English-German cognates (EG), which coincide in form in English and German, but not in Russian (), and words that do not match Russian-German translations equivalents (NC) (время – Zeit – time).

The experiment involved 39 unbalanced trilinguals, linguistic students of the North Caucasus Federal University, for whom Russian was their native language (L1), and English and German were their second (L2) and third languages (L3), respectively. Participants' proficiency at levels L2 and L3 was preliminarily determined on the basis of academic performance, including the results of qualification tests at levels L2 and L3, as well as data from questionnaires on the history of learning foreign languages. Data from three students were excluded from the overall analysis due to their relatively deep knowledge of Spanish and French, which may have influenced the results. The data of three more participants were excluded due to their incorrect performance of the translation recognition task (the error rate was more than 60 %). The remaining 33 participants were between the ages of 18 and 24 with a mean age of 19.8 (SD = 1.0). Twenty-six of them were women and seven were men. All of them were born in Russia and on average they studied English for 11 years at school and for 1.8 years studied German at the university.

The results obtained showed the statistical significance of the main intrasubjective effect of cognate status (F (1.92, 59.63) = 25.93, p <.0005, partial eta-squared = .4, power = 1.0); in general, all three types of cognates were translated by the subjects 20–27 ms faster than non-cognates. However, there was little difference in RT response times for different types. Russian-English-German cognates were recognized 6 ms faster than Russian-German cognates, and 7 ms faster than English-German cognates. The difference in RT for Russian-German and English-German cognates was less than 1 ms. The interaction between cognitive status and level of language proficiency was found to be insignificant (F (1.92, 59.63) = .54, p = .58, partial eta-squared = .02, power = .13), suggesting that participants both with high and low English proficiency L2 showed similar results in recognizing cognates and non-cognates. The effect of test types was also statistically significant (F (1.0, 31.0) = 65.59, p <.0005, partial eta-squared = .68, power = 1.0). Both groups of participants recognized correct translation pairs (“yes” tests) faster than rejected false translation pairs consisting of Russian words and German control words (“no” tests).

The average response times for correct and false translation pairs are shown in figure 1 and 2. The triple interaction of cognate status, test type and language proficiency level turned out to be insignificant (F (1.61, 49.93) = .95, p = .38, partial eta-squared = .03, power = .18). Pairwise comparison of different types of cognates did not reveal any significant differences between Russian-English-German and Russian-German cognates (MD = 4.5; SE = 2.4; p = .07), as well as between Russian-English-German and English-German cognates (MD = 3.04; SE = 2.3; p = .2). The effect of language proficiency between the subjects was statistically significant (F (1, 31) = 4.43 p = .04, partial eta-squared = .12, power = .53). Subjects with higher L2 proficiency performed the translation recognition task faster than those with lower L2 proficiency in both the "yes" and "no" tests. Interestingly, in the group of participants with a higher level of English proficiency L2, the average RT for Russian-German and English-German cognates were equal. Average RT and uncertainties are shown in tables 1 and 2.

Based on research data confirming the hypothesis of non-selective access and the model of a shared storage of mental vocabulary, it was expected to find an interlingual influence of all three languages in unbalanced trilinguals who, during the experiment, performed recognition of the translation from L1 Russian to L3 German. The experiment led to two major discoveries. First, the “standard” effect of simplification in cognate processing was reproduced for a new combination of languages, namely Russian and German: Russian-German cognates were recognized faster than German non-cognates. The statistically significant effect of reaction time obtained in the translation of all three types of word cognates indicates a non-specific choice of language that applies to three languages. Second, for trilinguals, we can talk about additional simplification over and above the standard cognate effect. Russian-English-German cognates with a similar form and the same meaning in all three languages were recognized faster and more accurately than Russian-German cognates with a dissimilar English translation and English-German cognates with a dissimilar Russian translation. This shows that when recognizing words in a given foreign language, not only the native language, but even the second foreign language – in this case English – is involved in lexical processing.

In general, the results of this study indicate that interlanguage interactions are not limited to the influence of the native language on the second language. Two foreign languages acquired later in life can also affect each other during lexical processing. In the case of Russian-English bilingual students L2 played a role in their performance in German L3, which indicates that in addition to their native language, knowledge of L2 can also be a resource that an L3 learner can turn to.