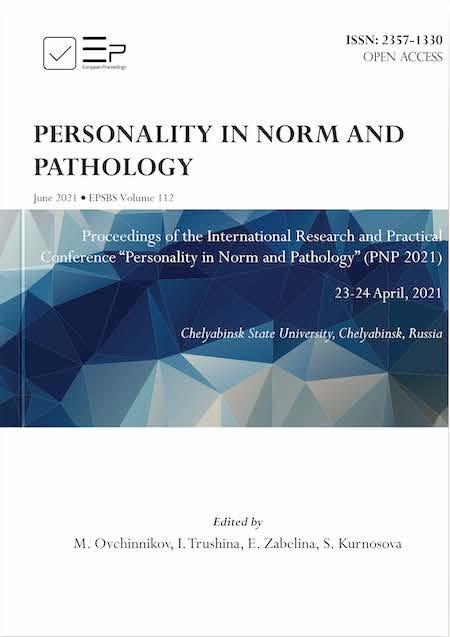 Features Of The "Dark Triad" And Professional Motivation Of University Students

Nowadays, university education provides quality professional competences for career building. In many countries the demand for human capital is increasing, which requires an increase in educational achievement, which largely depends on the personal traits of students (Lutz & Samir, 2011). In education, there is a great interest in high levels of competencies acquired by students during their studies (Papadopoulos et al., 2013). This contributes to the competitiveness of students (Orsini et al., 2016).

The combination and expression of not only positive but also negative personality traits can have a certain impact on students' motivation in learning, as well as on the success of career building and psychological and pedagogical assistance in professional life (Kornienko et al., 2018).

In describing negative personality traits, many studies include the concept of the "dark triad". Among the traits of the "dark triad" - negative personality traits - the features most often considered are non-clinical narcissism, Machiavellianism and non-clinical psychopathy (Paulhus & Williams, 2002). Each of these three traits can be seen as an independent element, but together they complement each other and are interrelated constructs (Egorova & Sitnikova, 2014).

Each of the "dark triad" constructs under study has a rather complex and understudied structure. The term "narcissism" is used in various fields of psychological science - in clinical psychology, in psychotherapy and counselling, in psychological treatment and in the psychology of individual differences (Raskin & Hall, 1979). According to the Diagnostic Statistical Manual of the American Psychiatric Association (DSM-IV), narcissism includes the following characteristics: 1) an exaggerated sense of self-importance; 2) persistent fantasies of unquestionable future success, which may appear in various guises - in the form of boundless power, epochal discoveries, unearthly beauty or ideal love; 3) demonstrativeness as a manifestation of the need for adoration and admiration; 4) inadequate responses to criticism; 5) expectation of special attitude and privileges without understanding that others expect the same response; 6) shameless use of others for realization of their desires and achievement of their goals; 7) polar attitude towards other people (either idealization or contempt); 8) lack of understanding of other people's emotions, lack of empathy.

In the psychology of personality differences, narcissism ("non-clinical narcissism") is seen as a stable personality trait that varies within the norm and influences patterns of interpersonal relationships and performance.

Research on non-clinical psychopathy began in the late 19th century and has historically been linked to research on sociopathy. A set of traits characteristic of sociopathy was also used to describe non-clinical psychopathy: the ability to attract other people, the ability to make a good impression, insincerity, lack of regret and remorse, lack of obligation, propensity for antisocial behavior, inability to learn from one's own mistakes, pathological egocentrism, poverty of the emotional sphere. Egorova and Sitnikova (2014) write that the most widespread is the two-factor model of psychopathy which includes the reduced emotionality or primary psychopathy (egoism, coldness, low anxiety, fearlessness, ruthless use of others, propensity to manipulative behavior) and asocial behavior or secondary psychopathy (instability, antisocial life style).

Four factors of non-clinical psychopathy have been derived from all the studies undertaken - interpersonal interaction style (arrogance and tendency to deceive), emotional response style (poverty of emotional life), lifestyle (impulsivity and irresponsibility) and behavior style (tendency to delinquency). As a rule, maladaptivenessis always indicated as a characteristic feature of psychopathy, both clinical and non-clinical. Thus, based on its characteristics, non-clinical psychopathy interferes with the formation of a well-functioning self-concept, the establishment of normal interpersonal relationships and, basic to our study, interferes with the professional adaptation of the individual.

The term "Machiavellianism" originated with Nicola Machiavelli's treatise The Sovereign. Machiavellianism includes manipulation and exploitation of others, a cynical disregard for morality, a focus on self-interest and mendacity. Machiavellianism also implies emotional coldness, amorality and a tendency to manipulate others by resorting to flattery and deception.

In the article «Do Bad Guys Get Ahead or Fall Behind?» describes the relationship between Dark Triad scores and career success. Based on the research, individuals with high levels of Machiavellianism follow three core values: a belief in the effectiveness of manipulative tactics in dealing with others, a cynical view of human nature, and a moral view that places convenience above principles (Spurk et al., 2015).

It has been established that third- and fourth-year students consider Chelyabinsk State University more attractive and modern than second-year students. This is manifested in such environmental factors as high satisfaction with the form of study, content of disciplines, support of the educational process, learning activities in general.

Thus, by the older years of study at the Institute of Education and Practical Psychology, professional motivation for learning increases, expressed in such motives as the acquisition of knowledge and the formation of professionally important qualities. Also, such environmental factors as: "Content of education" and "Attractiveness of university". The results of this study testify not only to the professional "maturation" of students by the last, final year of the Institute of Education and Practical Psychology, but also to the quality of teaching in Chelyabinsk State University, which lies in the quality of knowledge received by students and in instilling love for the chosen profession by teachers.

It can be observed that competences determine the forms of professional activity implementation, but its content will be determined by professionally important qualities.

Yakovleva (2009) considers the unity of professionally important qualities and competences of a specialist as the conceptual basis of professional competence. The most important quality that determines the professionalism of a defectologist is the readiness to provide psychological and pedagogical assistance to persons with disabilities, which is composite and includes tolerance, empathy and optimism (Yakovleva, 2009).

A study that includes all the traits of the dark triad would therefore make an important conceptual contribution as to which career outcomes the dark triad can be positively related to. Furthermore, it is also important to know how people with dark personality traits perform in career advancement, because career success represents a major desired outcome in life and work for most people. In our study, the questions raised were: 1. How are the features of the "dark triad" related to the professional motivation of special (defectology) education students? 2. What features of personality traits manifestation are most important for the development of professional motivation?

The study of "dark" personality characteristics in the context of trait theory emerged in the interdisciplinary space - at the intersection of clinical and differential psychology interests. The structure of personality disorder indicators was diagnosed by the DSM-5 (The Personality Inventory for DSM-5), includes Negative Emotionality (with the facets of emotional lability, tendency to experience anxiety, restricted affectivity, loss of safety in separation, hostility, perseveration, and subservience) (Egorova et al., 2017).

These subclinical traits offer advantages in the short term of relationships with others, e.g., high Machiavellianism is associated with manipulative strategies in relationships and avoidance of maintaining long-term contact. Such claims and research raise the question of how are carriers of the "dark triad" perceived as a result or process of interaction with them?

The study was conducted on the basis of the federal state budgetary educational institution of higher education "Chelyabinsk State University". The sample consisted of 58 persons aged from 18 to 21 years, 69 (92%) of whom were girls and 6 (8%) boys; the average age was 20.3 years ± 1.84. All subjects were 2nd, 3rd, 4th year students who voluntarily agreed to participate in the study. The first year was not included in the study, as it was at the stage of adaptation to the new learning conditions. The following methods were chosen for the study in students of the Institute of Education and Practical Psychology of Chelyabinsk State University:

2. The questionnaire aimed at studying the factors of students' professional motivation.

The statistics for the Kruskal - Wallis test are shown in Table 2.

Thus, the study revealed a number of patterns of professional motivation in university students and personality traits of the "dark triad".

It has been revealed that senior students of the "Special (defectology) education" direction at Chelyabinsk State University have a stronger value of higher education institution and form of education (students are studying on a full-time basis). The 2nd year students need the support of their tutor more. Second-year students have higher scores on the "non-clinical narcissism" scale. Research has shown that only narcissism is associated with extraversion, openness and self-regulation. It can be assumed that 2nd year students are more focused on social interaction, open to new knowledge and competence development, as well as they have a more pronounced motive to obtain a diploma, the form of learning, interest in the discipline depends more on the interest of the teacher in the read discipline.

Each of the features of the "dark triad" can manifest differently in professional interests and the probability of encountering a person who displays Machiavellianism in the field of service delivery is quite high (Kowalski et al., 2018). Therefore, it can be assumed that the features of the "dark triad" personality traits of defectology students identified as a result of the study have a practical basis and are to some extent necessary for professional activities in the field of special (defectology) education.