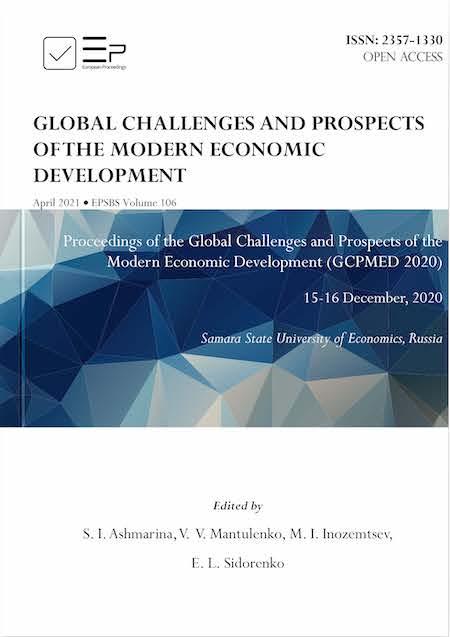 Capital Investment Accounting Is The Basis Of Financial

The growth of capital investments in fixed assets requires an examination of the main problems of their accounting and reporting in the implementation of investment activities. From all forms of accounting (financial) reporting, indicators for investment activities are found in the statement of cash flow. When assessing the effectiveness of capital investments, interested users lack the information posted in the statements, they need indicators detailing the financial results obtained from capital investments in fixed assets, as well as the volume of output attributable to such objects. These calculations can be carried out only with additional internal information, which is not disclosed in the reports. The study considered the prospects for resolving these problems by state bodies and proposed options for improving accounting reporting to conduct an effective assessment of capital investments in order to ensure the financial security of the functioning of the economic entity. From the state, measures are being taken to resolve the problem of reflecting indicators for capital investments. A federal standard project has been developed. Major Russian economic entities are actively involved in the discussion and revision of the regulatory document project, taking into account its further practical application. Compilation of reports on committed capital investments is important, especially in capital-intensive organizations. Capital investments in non-fixed assets indicate not only an increase in the efficiency of the enterprise, but also a competent decision taken for production purposes, ensuring the financial security of the company's functioning in the future.

The need for its application is primarily determined in large phonodomous enterprises. For external users, it is problematic to obtain information about pending capital investments even from accounting (financial) statements. Pending capital investments in the balance sheet are shown as "Other non-current assets." Maybe this information was not so significant, for example, for investors, but this is not so. Unfinished capital investments, especially those made in large quantities, indicate a diversion of production capacity from the main work process. Here we are talking about the fact that if a large capital investment project is carried out, then huge funds and resources are spent on its implementation in the form of the use of fixed assets, material resources and raw materials and labor. In this case, there is always a need to analyze whether capital investment projects should be implemented or not, it may be more profitable to direct the free production forces of the organization for other purposes of activity than for the implementation of such projects. That is why, when it comes to attracting investment in an organization, one of the first points of analysis is unfinished capital investments, since they take a lot of resources to implement.

The authors developed a methodology for improving the disclosure of the company's capital investments in the financial statements. The issue of regulation of investments accounting by the state is studied. The need for further development of methodological recommendations is determined. One of the purposes of the study is to assess the possibility of detailing capital investments and the formation of specific positions in the reporting forms. Another goal is to provide interested users with objective information containing analytics on capital investments. The obtained data will allow further evaluating the effectiveness of capital investments by investor organizations. The calculated performance indicators will serve as the basis for making decisions on long-term business development.

This standard provides a fairly broad list of actual costs that can be included in the value of pending capital investments. The standard is still in development, but now you can notice how important its application will be, since a fairly wide range of issues on accounting for pending capital investments is regulated. In addition to the listed costs, additional costs can also be included in the cost.

In the case of property that is additionally used for capital investments and paid by any non-monetary means, its value is determined on the basis of fair value. Determining fair value in Russian accounting is not yet commonplace, it is more international practice. Therefore, if the organization were to apply the standard in practice, it needed clarification of such calculations. So far, there is only a reference to international standards, but it is advisable to develop domestic practices based on international standards and implement it.

A fairly wide list of costs that are not to be included in the value of pending capital investments is also determined. In the standard, the list is presented under the name of costs, but in fact, from the point of view of professional judgment, it is worth using the term "expenses" in addition to the term "costs." Subsequent valuation of pending capital investments involves an impairment check. This moment is also new for domestic practice, so it should be carried out on the basis of international practice, using international standards of financial reporting (Federal accounting standart 26/2020)

The BMC website contains comments on this draft standard (BMC, 2020d). Comments are reflected both on the definition of concepts and terms, and on all moments of accounting for unfinished capital investments, from valuation, to disposal and disclosure in reporting. Basically, comments are made by such large companies as PJSC Gazprom Neft, PJSC NK Rosneft, PJSC Surgutneftegaz, PJSC MMC Norilsk Nickel. This is understandable, since it is such companies that are phonodomous and they will have to put this standard into practice to a greater extent.

PJSC Rosneft put forward the issue of the moment of initial recognition of pending capital investments (BMC, 2020a). It is proposed to develop a recommendation with an illustrative example of the moment of recognition of pending capital investments, and not to amend the text of the standard. In particular, we are talking about construction by contract with a long term of more than 1 year. And as recognition criteria, the customer's control over all construction processes and risks is put first. In turn, Rosneft proposes to amend the text of the standard itself and clarify the moment of recognition regarding the receipt of property from persons who are not owners or the state. PJSC "Surgutneftegas" provides comments on the terminology corrections according to the text. It is proposed to remove terms such as "maintenance" and "inspection," since these actions do not improve the functional quality of objects (BMC, 2020b). MMC Norilsk Nickel PJSC proposes amendments to the wording of the recognition conditions - obtaining economic benefits not from pending capital investments, but from an object of non-current assets, which will eventually be created (BMC, 2020c). On this basis, a controversial situation arose, and the decision was to leave the original wording. Thus, the adoption of this standard will be an excellent regulator for accounting for pending capital investments in the organization. Further development of guidance on accounting for pending capital investments will also be an important step, as clarification of some items of the standard for accounting in the organization will be needed. It is also important that many organizations can participate in the development of draft standards. This is quite convenient for them, since they look from a practical point of view, and having in their practice many different situations, I have the opportunity to regulate them with a regulatory document to avoid in the practice of litigation.

The new FSBU will simplify the accounting process, but will also contribute to a more convenient presentation of reporting information and its further analysis. The effectiveness of capital investments is assessed according to the following principles:

˗ modeling of the capital investment project taking into account the temporary factor: time is estimated for receipt of necessary material resources for the construction of facilities, performance of works by third-party organizations;

˗ analysis of loss of profits in capital investments, that is, assessment of the feasibility of other projects that are more cost-effective for the organization;

˗ consideration as a source of financing of capital investments of own funds without attraction of borrowed capital;

˗ assessment of inflation and the corresponding economic situation in capital investments;

˗ analysis of risks specific to the company's activities in capital investments.

The valuation of capital investments is based on two methods:

Regardless of the time factor, the payback period and the accounting rate of return can be calculated, for example.

The payback period will be calculated using the following formula:

where KV0 is the Initial capital investment,

where, Pn is the profit for the nth year,

n is the number of years.

When calculating these indicators, the time factor is not taken into account, therefore, cash flows will be equal during the entire period of capital investment. But these indicators are easy to calculate, which is the convenience of using them.

Depending on the time factor, the internal rate of return (IRR), the discounted payback period (DPP) can be calculated.

Thus, the Internal rate of return (IRR) can be calculated using the following formula:

where, NPV is net present value,

DPn is cash flow for the nth year.

The discounted payback period (DPP) can be calculated using the following formula:

where, r is the discount rate.

You can propose the following as suggestions for expanding reporting forms:

˗ return the line "Unfinished Capital Investments" to the accounting practice and enter a decryption to reflect unfinished capital investments if the indicators are materialized;

˗ as part of the annual net profit, allocate part of the profit earned through the use of the corresponding funds, which will allow to more accurately calculate the profitability of capital investments and the period of their payback, all this in the future will give a positive development of the business of the corresponding industry. Failure to include details in the financial results report when forming the present value model may lead to inaccurate estimates of profit and rate of return on assets and equity, as well as inconsistent ranking of mutually exclusive investments (Robison & Barry, 2020). Such innovations will help external reporting users. Information on pending capital investments will be reflected in the first section of the balance sheet, which is primarily consistent with usability. Also important is the reflection of interest on debt obligations in relation to the investment asset. This information is not available even in the reporting explanations. Fundamental information about investments explains one third of the predictability of profitability (Petrovic et al., 2016), and further business success.