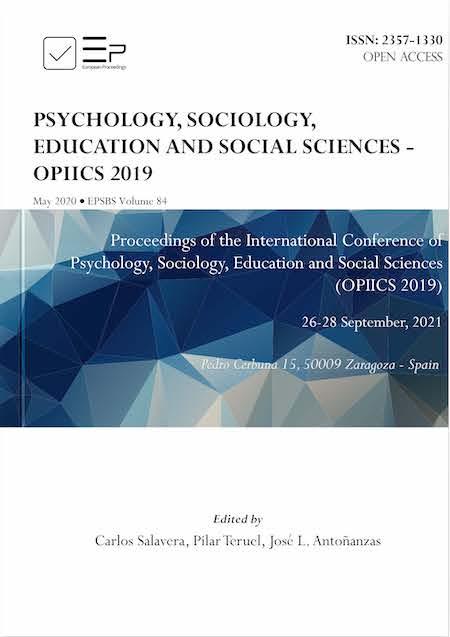 Down syndrome is defined as a genetic disorder caused by the presence of an extra chromosome in pair 21, which can cause difficulties in various areas of development (Burns & Gun, 1995; Egozcue, Guitart, & Vidal, 1997). That is why early socio-educational attention is crucial (Aranda, 2008; Flórez, 2005; Galeote et al., 2006). From the educational field, different strategies and resources are used that allow people to acquire all the necessary skills in an adequate way, although normalization and integration must begin in the family environment (Ruiz Rodríguez, 2008). As indicated by Ruiz Rodríguez (2008, p. 6), the school is the institutional educational agent par excellence, in charge of imparting basic knowledge to all children and preparing them to be full citizens in their adult stage. Also, another important area focused on the integral development of people with Down syndrome, are the associations. That is, entities that provide educational, social and attention to people with disabilities. In addition, the associations do an important job, since there are hardly any materials adapted to the needs and interests and thanks to the preparation of these they can provide an adequate intervention to the characteristics of all people (Vived & Molina, 2012). Specifically, this study is carried out within the framework of the Down Association that offers comprehensive care in the global development of people with this syndrome. One the association´s objectives is to provide both educational and social intervention, through the completion of various workshops to work on the different skills and abilities useful for personal, social and professional development. Therefore, the aim is to intervene to improve the quality of life of people who have a disability. In this sense, one of the most relevant aspects for their personal, social and professional development is the language and that is why any activity whose goal is to improve it should be encouraged. In addition, the magnitude of the group of people with Down syndrome should be taken into account, since according to the State Database of Disabled Persons (2012) in Spain, for instance, there are three million people registered with this disorder. Bearing this in mind, the aim of this study is to analyze the benefits of the proposed activities to encourage the acquisition of vocabulary through workshops that promote different skills. More specifically, the relationship between EI and anxiety, and the lexicon by the type of workshop is analyzed.

Language Development in Down Syndrome

Emotional Intelligence and Down Syndrome

Ruiz Rodríguez (2008) indicates that people with Down syndrome have an emotional life as rich as others, since they live their affective experiences with equal or greater intensity, although both communicative and cognitive difficulties can influence the capacity for rationalization, regulation and expression of emotions. According to Flórez and Ruiz (2003) there is a widespread belief that people with Down syndrome are "affectionate" and "sociable", these statements suggest that their ability to regulate their emotions are remarkable. However, without an intervention, their spontaneous socio-emotional level is low, so for the acquisition of emotional skills and self-control in any context this training is required. Ruiz Rodríguez (2004) explained the need that these people have for training through specific programs to acquire aspects of emotional intelligence that the rest of people acquire more without needing specific intervention. In these programs, socio-emotional skills are worked on, as in the knowledge and control of one's emotions and recognition of the emotions of others. The EI development is directly related to the acquisition of aspects related to language, since this is a necessary tool and guide to achieve these skills. Following the contributions of Salovey and Mayer (1990), language is one of the basic prerequisites for developing the abilities that integrate the four-dimensional model they proposed. First, there are the abilities of perception, assessment and expression of emotions, so that individuals are able to recognize and express their own emotions and those of others, it is essential to have a basic knowledge of oral and gestural language. It is also necessary to have a lexicon related to these aspects and a level of discourse appropriate to the demands to be able to express oneself successfully. On the other hand, in the second dimension are the abilities of emotional facilitation of thought, following the contributions of Vygotsky (1962) language is a capacity that appears before thought, since the actions and thoughts depend on the linguistic capacity of the students. Therefore, it will be necessary to have a good level of both oral and gestural language. In the third dimension is the understanding of emotions, this skill is closely linked to the development of both oral and gestural language, as it is necessary for the rationalization and assimilation of aspects related to emotional intelligence. The last dimension of the skills model of Salovey and Mayer (1990) includes the skills for emotional regulation, following the contributions of Vygotsky (1962), language is not only a tool to communicate, but also plays an important role in the processes of cognitive control and regulation of both behavior and emotions. It is important to approach emotional intelligence taking into account the linguistic level of the person, since a problem in this can cause limitations to express and understand the feelings and emotions, thus causing states of frustration, anxiety and stress.

Dissimilar associations offer workshops focused on improving social skills and reading and creativity to also facilitate the acquisition of different skills. This study provides a small but interesting block of empirical evidence of the activities carried out in people with Down syndrome. The aim is to identify what type of workshop is appropriate in some situations but not in others (or all). People with Down syndrome with high levels of emotional intelligence who attend “social skills” workshops can improve their lexicon levels but not those who attend the “creativity and reading” workshop. The “reading and creativity” workshop influences directly the lexicon and it could be more suitable for the level of lexicon when anxiety levels are high.

Based on these arguments, we formulate the following hypotheses:

Hypothesis 2. People with lower levels of anxiety will have a higher level of lexicon.

Hypothesis 3. The averages in EI, anxiety and lexicon will be different depending on the sex.

Hypothesis 5. The relationship between EI and the lexical level will be moderated by the type of workshop controlling for sex and age.

Hypothesis 6. The relationship between anxiety and lexical level will be moderated by the type of workshop controlling for sex and age.

The aim of the present study is to analyze the role of the type of workshop in the relationship between EI and anxiety at the level of lexicon in people with Down syndrome.

15 participants of which 9 attend the social skills workshop and 6 the reading and creativity workshop, with ages ranging from 18 years to 33 years. The average age of the entire set of subjects in the sample is about 24.07 years (SD = 4.35). Of the total study sample, nine of the participants are women, (60%) and six are men (40%). The workshops used in this study are available on the website of ASOCIACIÓN DOWN ESPAÑA: https://www.sindromedown.net/publicaciones/publicaciones-down-espana/

Reading and Creativity Workshop. Workshop information can be downloaded from the following link: https://www.sindromedown.net/wp-content/uploads/2018/09/Taller-de-Poes%C3%ADa.-Gu%C3% ADa-did%C3%A1ctica.pdf

Vocabulary or Level of the lexicon was measured by the standardized test PPVT-III - Peabody: Test of Vocabulary in Images (Dunn, Dunn & Arribas Aguila, 2010).

Taking all these results into account, it can be concluded by saying that the most positive workshop to develop all the aptitudes, in the people with Down syndrome, is the workshop of social skills, it seems to indicate that the activities carried out by the people who participate in it obtain higher scores on all the skills that have been measured by the administered tests. However, although those attending the reading and creativity workshop scored less in the administered tests, it can be pointed out that the activities carried out in this workshop do not improve or worsen the level in the skills measured. It is also important to add that the reading and creativity workshop is positive for people who have higher levels of anxiety. Therefore, a relevant result regarding the reading and creativity workshop found in this study is the direct positive relationship between the reading and creativity workshop "1" and the level of lexicon, so the interventions through this workshop increase in form significant the level of lexicon. Furthermore, the lower levels of anxiety in those users who participate in the literary creativity workshop could be due to the climate of this workshop that could allow the expression of internal or affective questions of the users, which could diminish their levels of anxiety. Therefore, these results may give guidelines for a more personalized and beneficial intervention for people who attend to a workshop in order to improve their lexicon levels and thus provide the skills to achieve an integral development on a personal, social and professional level.