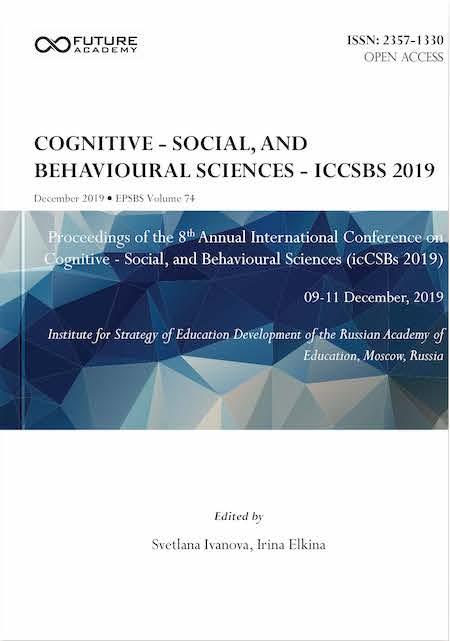 Resilience In The Semantic Space Of Education For Sustainable Development

However, to solve this problem, each country should take into account the characteristics of its culture and national education system. This means that we need a look at the ideas of sustainable development through the prism of the core of the national culture - language, historically established values, traditions, national identity, mentality, cultural “code”, thanks to which the self-identity of the people is reproduced through generations (Haugen, 1972). But at the same time, a new task for education cannot be solved by old means.

To rethink our relationship with nature, it is necessary to redesign the language tools used (Cachelin, Rose, & Dustin, 2011). First of all, we are talking about metaphors.

Metaphors are an essential element of any culture, a powerful language tool that controls our thinking and actions. Metaphors help to understand new phenomena in the world, especially when these phenomena are abstract, complex and inaccessible for direct observation. Metaphor - a prism through which the worldview is accomplished. Psychologists call metaphors "carts for transferring meaning" between new and well-known knowledge, science and everyday life, adults and children ... (Zinchenko, 2007; Lakoff & Dzhonson, 2004; Mac Cormack, 1990).

We use metaphors in everyday life without even thinking about it. However, there are lurking dangers. Metaphors have great impact power, and their use requires great attention and caution. The involuntary use of the “erased” root metaphors of the consumer society in speech inevitably reduces the results of education for sustainable development (Bowers, 2002). If the process of creating a language for education in the interests of sustainable development (ESD) is spontaneous, it can lead to the formal use of the ESD brand, reduce the achievement of personal results, and ultimately lead to imitation of ESD (Aubusson, Harrison, & Ritchie, 2006; Barter & Russell, 2013; Berryman & Sauvé, 2013). Therefore, targeted development of the language of ESD is being conducted in many countries of the world, including metaphors of sustainable development (Jensen, 2006).

The methodological basis of the study was pedagogical semiology, a sphere of pedagogy that focuses on the ways of transmitting culture in the form of signs and symbols to students in the process of learning and teaching, as well as on how sign language influences ways of understanding the world and communicating with other people (Semiotics Education Experience, 2009).

Studies were conducted in the interregional network partnership of teachers "Learning to live sustainably in a global world." It was created in 2015 by the UNESCO Chair on Global Problems and Emerging Social and Ethical Challenges for Large Cities and Their Population at the Faculty of Global Processes of the Lomonosov Moscow State University and the UNESCO Network Chair “Environmental Education for Sustainable Development in a Global World” under the Institute for Educational Development Strategy of the Russian Academy of Education.

Identified two groups of teachers of similar age, professional experience and specialties (120 teachers in total). At the beginning of training, all teachers did not have knowledge of sustainable development and education for sustainable development (ESD), they had not previously met with the concept of “resilience”. Both groups have been teaching for two months how to teach ESD. The themes of the classes were the same. In the first group, the content of training was based on a scientific language, in the second - in its combination with conceptual metaphors.

To test how the metaphors of SD change their attitude to the world, teachers were asked to give a subjective characteristic of the concept of resilience using the Osgood C. semantic differential methodology (Novikov & Novikova, 2011).

The calculation of the semantic differential was carried out according to the standard scheme using the standard formula (1):

where (М) - the final average value of the factor of power, evaluation or subjectivity,

n-3, n-2, n-1, etc. - the frequency of occurrence of the assessment and other estimates on the four scales of one factor,

Ni - the number of scales encoding a factor

Nh - the number of subjects.

Each stage of development of society is characterized by its basic metaphors of interaction with nature. Some of them have been proposed by UNESCO and received universal distribution. These are metaphors: ecological footprint, ecological lenses, green economy, blue economy, our home planet and others. The metaphor "we are all in the same boat" is also common.

Different metaphors can represent different variants of sustainable development scenarios. Thus, according to Rasmus Karlsson, if the metaphor of the ecological footprint involves the use of existing technologies by society, then the metaphor of a rocket take-off is a long-term stable trajectory, assuming the temporary state of instability. The metaphor of civilization - the aircraft on the runway suggests different options for the sustainability of civilization (Karlsson, 2016).

The development of metaphors for SD in national education systems is also underway. Wilhelm Humboldt wrote that different languages are not at all different designations of the same thing, but different visions of it (as cited in Dzyatkovskaya & Akunina, 2018).

In our country, the pedagogical undeveloped language of ESD significantly hampers its implementation in practice. The ideas of sustainable development are included in the content of general education only at the level of scientific information. Not surprisingly, it remains poorly understood, even for teachers. At the same time, textbook texts contain metaphors that view nature as a commodity, and the market as a mechanism for solving environmental problems. The erased metaphors of the relationship between society and nature as enemies of dominate (Ivanova, 2007).

Metaphors of ESD proposed by Academician N.N. Moisees, “environmental arithmetic”, “ethics of a planetary scale” are not mentioned in educational literature (Moiseev, 2010).

Nevertheless, the development of linguistic means of ESD does not stop, as well as their approbation in experimental schools (Dzyatkovskaya & Akunina, 2018; Pustovalova, 2016; Audebrand, 2010; Larson, 2018).

The visual metaphor of the ecological imperative is widespread: a man, serenely catching butterflies, not noticing that he raised his foot over the precipice. Successful is the metaphor of sustainable development as a spacecraft that is governed by its own laws, and the people in it are only attendants. Similar to the metaphor of humanity as a tenant of an apartment (ecological niche) who does not know / or ignores the rules of living in it, with the subsequent logical actions of the landlord. Verbal and visual metaphors have “green axioms” proposed by scientists of the Russian Academy of Education.

Axiomatization of the content of ESD is an obligatory stage of its design, which is a consequence of its conceptualization (separation of the cultural core) and precedes the stages of objectification / contextualization and the semantic linking of all its fragments. Six “green” axioms were formulated, reflecting modern scientific knowledge about the environmental imperative and cultural precepts: (1) the axiom of a common environment, common destiny and shared responsibility; 2) the axiom of restrictions on the part of nature in any activity; (3) Taboo axiom on the reduction of natural and cultural diversity; (4) the axiom measure of environmental change; (5) the axiom of a scarce resource in any activity; (6) the axiom of the possibility of harmonization of nature, society, economy. Presented in the form of metaphorical images, "green" axioms are a bridge to the principles of moral behavior. For example: ECO and EGO are incompatible! Did something - look around! With nature - only soft control! And precaution! Learn to think ahead! Learn to count resources! Change not nature, but yourself! Know the wisdom of nature! Thus, students learn about "environmental arithmetic" and the ethics of a planetary scale (Dzyatkovskaya & Akunina, 2018).

Upon completion of the courses, students were examined for a subjective perception of the term resilience that is new for all teachers using the semantic differential method.

Resilience is a new concept for Russian education. The information society is characterized by growing interest on the part of Russian and foreign pedagogy and psychology to the problem of human vitality, the population in connection with the global humanitarian problem of human survival on the planet (Charney, 2004; Maddi, 2005; Southwick, Bonanno, Masten, Panter-Brick, & Yehuda, 2014).

Resilience is an integral characteristic of the possibilities of human life and activity, the basic resource of human socialization (Mahnach, 2016; Dzyatkovskaya, Saraeva, Galiakberova, Sukhanov, & Mysnikova, 2018; Ryl'skaya, 2009). According to the interdisciplinary approach, resilience is a complex integral characteristic of a person given by nature and developed by society, an emergent property of the “man-life environment” system that provides the current and potential level of mental activity in given socio-natural conditions.

Teachers of the two groups were offered alternative characteristics of an unknown for them word resilience to manifest their relationship to it (semantic differential method). The evaluation was conducted on three scales: strength, assessment, subjectivity. The results are presented in Table .

From 21 pairs of comparison, 10 of them have mathematically significant differences between groups A and B. On the “Assessment” scale, teachers who are familiar with the “green axioms” give an assessment of resilience as a native, rather than an artificial characteristic. They believe that sustainability is more natural than social characteristics. They believe that sustainability is associated with a person’s confidence in his interaction with the environment. At the same time, sustainability is associated not so much with material factors, as with spiritual ones.

According to a survey of teachers conducted after testing, 84% of teachers in the first group believe that introducing a new term ”resilience” into education is useful and even necessary in a dynamic world in which education is focused on advancing the socialization of students. 80% of the teachers in this group believe that they can take on the responsibility of building resilience in students and are confident that they will be able to achieve the goal (also 80%). In the second group, the number of teachers who also answered these questions was 24% / 8% / 8%, respectively.

It was concluded that the inclusion of sustainable development metaphors in the content of teacher education can change the subjective assessment of a new concept resilience by them, in contrast to the group of teachers that received information about sustainable development without specifically conducted metaphorical modeling of content. If ESD pursues not only the goals of informing about SD, but strives to form a new type of attitude, values, behavior, the use of “green axioms” seems appropriate. Metaphors of sustainable development are an important tool for the formation of the semantic space of ESD.

Analysis of resilience results was carried out with the financial support of the Russian Foundation for Basic Research in the framework of research projects No. 17-06-00151, No. 19-513-60001.