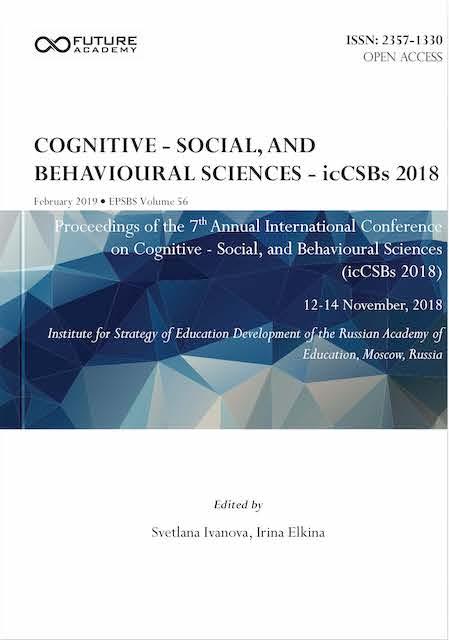 Synergetic Model Of Socialization Of The Person With Disabled Health Opportunities

The transformation processes occurring in the main spheres of public life at the beginning of the XXI century are the trigger mechanism that accelerates the process of improving the younger generation (Botha & Kourkoutas, 2016; Cobb, 2015; Vroey, Struyf, & Petry, 2016). In our opinion, the tasks of improvement and self-improvement are particularly acute for young people with disabilities, because they need to decide on their future profession, life goals and life plans; take a certain position in the social structure of society, create and maintain a significant circle of communication; learn how to adequately experience the inner picture of the disease (Bonnike, Douglas, & Stoner, 2018; Pearson, Clavenna-Deane, & Carter, 2015).

Therefore, it is important to describe the variable models of the social development of the younger generation in terms of synergetics

The essence, features, structure of socialization of the person with the limited possibilities of health from positions of synergetics were studied; conditions affecting this process were described.

To Identify the features of the formation of value orientations (M. Rokich) in adolescents with disabilities

To record the presence and nature of promising life plans (S. Muddy) in adolescents with disabilities

To conduct a study of the social development of adolescents with disabilities and describe a generalized model of their socialization in terms of synergetics.

The results of a pilot diagnostic experiment recorded a low level of general social development of adolescents with disabilities, as criteria for which we considered the presence and formation of value orientations, the presence and nature of life goals and plans (life prospects). The method of determining the value orientations of Rokeach (1973) with changes was used. At the ascertaining stage of the experiment, the results of the survey indicated the following: 85% of respondents (among them 100% of adolescents with disabilities and 45% of healthy adolescents) put “physical and mental health” among the terminal values ​​among the terminal values, the remaining 15% of respondents gave preference material security, the beauty of nature and art. In the last three places (6,7,8-m), respectively, were "productive life", "self-confidence", "interesting work". Among the instrumental values, “independence”, “intransigence towards shortcomings in oneself and in others”, and “care” were put forward for the 1st place. At the last 8th place was “courage to defend their views”, “tolerance”, “ability to insist on one's own.” There were no significant differences in the choice of values ​​between healthy adolescents and adolescents with disabilities. This initial result can be explained by the lack of ideas about the means by which an autonomous full-fledged life in society is achieved.

The presence and nature of life goals and plans (life prospects) in adolescents with disabilities were identified using a questionnaire with the following questions: 1. How do you see your future life in 1 month? After 1 year? After 5 years? 2. Would you like to get a profession, and if so, which one? How many years do you think this is possible? 3. List, what can a person do in his free time? Which of the following can you do? What would you like to learn in 1 month? After 1 year? After 5 years?

Analysis of the survey results showed that adolescents with disabilities, unlike their healthy peers, do not know how to build long-term perspective life plans; life goals mainly relate to leisure and non-professional activities; only 10% of the respondents would like to get a secondary or higher professional education. Extrapolating the general philosophical characteristics of the development process to the human development process as a biosocial being, at the end of the 20th century, within the framework of the anthropological approach, the concept of human resources was developed, which considers man as an integral being with its own history, values, life perspectives and explores the essence and laws of mutual adaptation of lifestyle human and industrial sector of the economy. One of the main concepts in this concept is the concept of “human potential”, the use of which will allow to systematically describe the holistic phenomenon of human and human development in terms of subject-subject approach. In psychological research, the concept of “human potential” is interpreted as an individual's ability to express themselves, self-actualization and self-realization, characterized by an adequate perception of the surrounding reality, spontaneity of response, transcendence and self-affirmation, clear singling out from society, independence and independence, the presence of social feeling, an interested, benevolent (but selective) attitude towards other people, ethnic certainty, self-confidence, sense of humor and creativity. Considering the concept of "human potential" at the personal level, in the opinion, the concept of "personal potential" should be applied, meaning a complex system of characteristics associated with the driving forces of spiritual development, with motivation and self-esteem (Klag & Bradley, 2004; Smith, Prendeville, & Kinsella, 2018; Smith & Gray, 2009).

Having processed the “raw data” obtained for each participant in the experiment, we compiled a generalized socialization profile of a teenager with disabilities, we came to some conclusions: firstly, from a system-synergetic position of socialization of a teenager with disabilities, it is considered as nonlinear, dynamic, non-equilibrium system; secondly, it consists of the following components:

The value-target component includes the goal and objectives of the socialization of the individual, as determined by society, the state, or the individual. It is known that the target orientation of socialization of an individual depends on the stage of development of society and the state, the system of social relations, the structure of society, the type and nature of human interaction with social institutions. The subject-object approach (E. Durkheim, T. Parsons) recognizes the active role of society in the process of socialization, the person (person) is characterized as a passive side (object), which is directed to all changes in society. In this case, the task of the person (person) is to become a tracing paper of the ongoing social changes, and the main, leading mechanisms of socialization are identification, imitation and existential pressure. In the most general form in the subject-object approach, the goal of socialization of an individual is the assimilation of accumulated collective social experience and the reproduction of a system of social connections. The subject-subject approach (J.G. Mead, H.C.H. Cooley) has a diametrically opposite view of the role of the person in the process of socialization, characterizes the person (personality) as a subject of his own development, capable of determining the direction, speed and desired result of development. Considering a person (personality) as a subject of their own development, the targets are shifting towards personal self-development, in which self-awareness, self-determination, self-realization, and self-affirmation will be recognized as important components (Doikou-Avlidou, 2015; Schneider, 2015; Vandekinderen, Roets, Van Keer, & Roose, 2018).

The content component is a set of processes that constitute the essence of the socialization of the individual. Exploring various approaches to the definition of socialization of the individual as a process, we came to the conclusion about the diversity and variability of interpretations of the sociocultural phenomenon under study. Socialization of personality is investigated as the process of acquiring a social nature by a person through the assimilation of social experience by an individual; on the basis of its inclusion in social relations and reproduction of the system of social relations; socialization is interpreted as the process of transferring and mastering norms and values, social roles (Main & Whatman, 2016; Nonis, 2015).

It is noted that in adolescents with disabilities, a slower, more mosaic and less stable compared to healthy peers, the formation of life prospects; dominated by near and medium prospects; less likely to be sustainable long-term prospects; the process of formation of life prospects proceeds faster in an inclusive educational environment (in competitive conditions); the older a teenager with disabilities, the faster and more stable the processes of life self-determination, an active role in this process is played by the school and the educational organization of additional education; We assessed the children's recreation camp as a pilot site, which can be used to launch or enhance the process of vital self-determination of adolescents with disabilities. The results of the study obtained from healthy adolescents included in inclusive experimental groups are interesting; they indicate that the life processes of self-determination of such adolescents are significantly higher than those of those who worked only with healthy peers; They chose professional activities related to the organization of interaction and assistance to people with disabilities as data prospects.