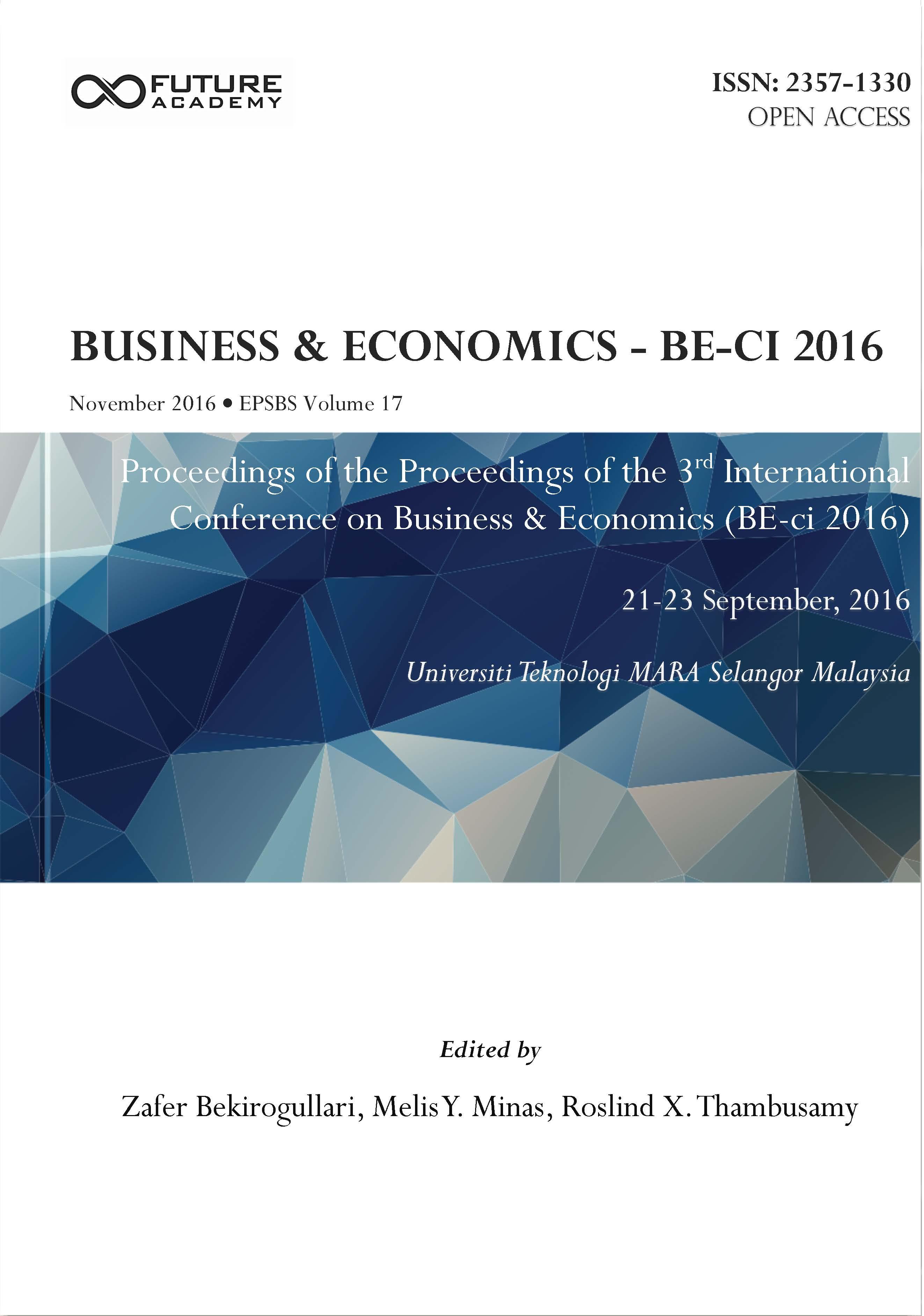 Do Self Efficacy and Familial Factor Matter? Understanding Women’s Entrepreneurial Intention in SMEs in Sarawak

Women in entrepreneurship are becoming one of the main attractions and concerns among researchers these days. It is relevant since a lot of leading countries are becoming more open to the access of women into entrepreneurial activity which was once dominated by men ( Norsida, 2010). Success stories of women entrepreneurs are broadcast in the media and even in the newspapers as recognition of their success. This triggers the intention among women especially housewives or employed women to make the first leap in becoming an entrepreneur ( Faraha, 2007). The development created by these women entrepreneurs offers a totally new platform to women as they are compared with more experienced male entrepreneurs (Wendy, 2014).Researchers agree that men and women are different when it comes to their approach towards entrepreneurial intention. This is due to the characteristics attributed to gender differences ( Croson & Gneezy, 2004). The differences among the genders can explain the different strategies adopted by the different genders in approaching similar issues, trends, opportunity and even threats. Entrepreneurial programs should therefore factor in such gender differences.

In Malaysia, the Department of Survey and Mapping Malaysia states that, the total female population in 2015 is 14,436,700 amounting to about half the total population in Malaysia which is 29,714,700. Participation of women in economic activity has become one of the major aspects which has led to the development of the Malaysian economy ( Chen, 2001). Women’s influence in the entrepreneurial industry is a force to be reckoned with and their contribution has resulted in the economic development and growth of the country (Wendy, 2014). The increase in entrepreneurial activity among women is related to the amount of effort put in by the Malaysian government, non-government organizations and private firms which have provided support and guidance over the years. According to the Department of Statistics of Malaysia, 82,911 businesses are owned by women entrepreneurs ( Farah, 2013). Hamzah ( 2013) in his research stated that, from 645,136 active Small and Medium Enterprises (SME) currently operating, 127,091 or 19.7% are owned by women. The majority of these women based enterprises are focused on the service industry amounting to 91.7% of the total involvement of women as SMEs are in manufacturing industry which is at 6.9% and 1.4% of women are involved in construction, agriculture or in mining sector (Women Entrepreneurs Network Association, 2012).

Even though there are increasing numbers of women entrepreneurs in Malaysia, most of the entrepreneurship research conducted is mainly focused on men and very little research has been done on women ( Musan, 2011). Research has found that Malaysian women who owned an enterprise has decreased in the country’s average annual growth rate from 2000 to 2008, which is lower compared to male owned enterprise ( MasterCard Insight, 2010).

Small and medium enterprise plays an important role in the development of a country ( Muhammad, 2010) contributing towards economic development, social uplifting and political stability of every country ( Khalique, 2011). Apart from SME, SMI (Small and Medium Industries) has also contributed to the industrialization of the economy ( Sahari, 2014). From the Eighth Malaysia Plan (8MP, 2001-2005), the Ninth Malaysia Plan (9MP, 2006-2010) and the tenth Malaysian Plan (10MP, 2011-2015), the Malaysian government has formulated various strategies to assist SMEs in growing and sustaining women entrepreneurs to tackle challenges in the business world. To enhance the SMEs’ performance and competitiveness, the government has continued to provide programs, facilities, incentives, financial fund and assistance to enhance women participation. In the Eighth Malaysia Plan, RM 1, 562 million was allocated and the monetary allocation has increased in the next Tenth Malaysian Plan ( Sahari, 2014).

Self-efficacy in an entrepreneur indicates how these women are motivated by their judgement to perform specific tasks given to them and their expectation on the outcome of their actions ( Bandura, 1997). Sukmana ( 2008) revealed that, parents who have an entrepreneurial background might encourage the children’s intention to become an entrepreneur. Apart from that, studies done by researchers on parental and family support models explain that the family members do influence entrepreneurial intention ( Wang & Wong, 2004). Dedication in the new venture is essential where success depends on the entrepreneur’s self-efficacy to navigate their business during difficulties and in the process of ensuring the success of the business ( McGee et al., 2009; Bandura, 2000). Researchers have found that, family is one of the factors included in the decision of self-employment in an individual.

Bandura ( 1997) in his research founds that self-efficacy is one of the variables related to the social cognitive theory. Bandura also stressed that self-efficacy is one of the major factors which affects one’s behaviour cautiously or incautiously and it effects how a person would set their goals, motivation, result expectations and outcome perceptions. The significance of self-efficacy and entrepreneurial behaviour leads to the interest of researchers in applying the theory to the scope of entrepreneurship.

The socio economic background refers to the social background of the entrepreneurs. Researchers found that in the family, parents play important roles in creating the credibility and desirability in their children on entrepreneurial intention ( Shapero, 1982). The relationship between business owners and their families is usually characterized with intense emotions and it may be a source of conflicts ( Corbetta, 2001). One of the major problems is intergenerational succession where the children are unable to sustain the business and rely on consultant agencies to work on the business. Family businesses are created due to trust among each other where trust provides a competitive advantage and it protects family wealth from being taken by outsiders.

The research framework adapted in this study was developed by Narayanasamy et. al ( 2011) and Bandura, A. ( 2000). It is divided into three (3) components, namely (i) Self-Efficacy (ii) Familial Factor, and (iii) Entrepreneurial Intention.

Two hypotheses are formulated to address the research problems and objectives:-

H 1:There is a positive relationship between self-efficacy and women’s entrepreneurial intention.

H 2: There is a positive relationship between familial factor and women’s entrepreneurial intention.

The study population consists of women entrepreneurs in a region of East Malaysian who are categorized under Small Medium Enterprises (SME) business. During the course of decision making on selecting the best sampling technique, simple random technique was selected. Simple random sampling allows the researchers to distribute more questionnaires and it is the most basic procedure in drawing a sample and the simplest among all sampling technique (Lewis & Sheppard, 2006). G-Power analysis software 3.1.9.2 was used to determine the sample size of this study. The predetermined minimum sample size of this study was 300 women SME entrepreneurs. A quantitative approach by using a self-administered questionnaire was adopted. 300 copies of questionnaires were distributed and 225 were collected after a month. The response rate error over 70 percent indicates error was not a concern ( Nulty, 2008). After initial screening, 200 copies were retained for data analysis and subsequent analysis. Data were then analyzed using SPSS Version 22.0.

Demographic details of 200 respondents are shown in Table .

Findings show that there is a positive relationship between self-efficacy, familial factor and women’s entrepreneurial intention. Thus, all hypotheses are accepted.

From the regression analysis showed in Table above, the R-Square value is 0.718. It indicates that 71.8 percent of the variance in women entrepreneurial intention is explained by two independent variables which are Self-Efficacy and Familial factor. The other 29 percent remain unexplained.

There is space for improvement that can be identified by researchers who are interested in furthering this study. The focus in this study has been only on women entrepreneurs in the Kuching area which might not be comprehensive enough to represent the whole population. Thus, future studies may be extended to the entire region of Sarawak, as well as, in the rural area as to represent all women entrepreneurs. More in-depth understanding on women entrepreneurial intention on other dimension such as emotion, education and structural inequalities would be useful to enhance the understanding on women’s entrepreneurial intention in business.