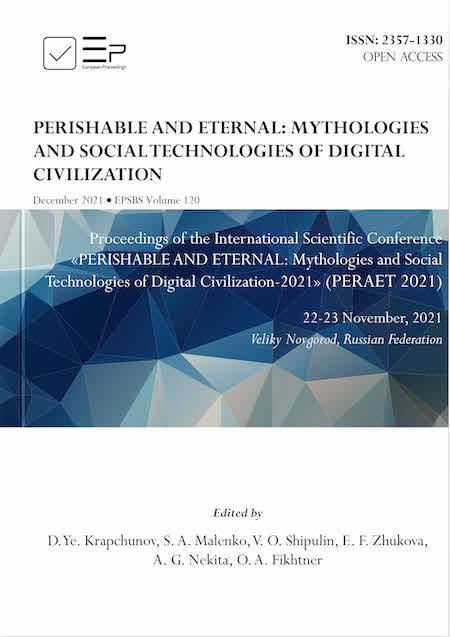 Man anthropologically lives in myth. Through myth the possibility of access to both remote in time and the way of perception and processing of information, as well as to the characteristic of modern culture, is provided. And, therefore, there will be the possibility of effective adaptation of the subject of mass consciousness to the changing conditions of the social environment, taking into account past experience. Recently, the use of these concepts in the relationship in one context or another is quite common: politics, art, advertising, media, websites (Kirillova & Danilova, 2019).

Difficulties of analyzing the stated theme

Modern myths, with all the understanding of their continuity with previous experience, contain such features and traits that are difficult to fit into traditional concepts. The simplest justification for the problem of "myth - mass consciousness" is in the use of mythological models of reality by the bearer of mass consciousness. This understanding of the place of myth in the content of mass consciousness does not exhaust the structure of the latter. But in modern mass consciousness mythological images have become conscious, became a means and a structure precisely because they combine ideas about the freedom of the individual and its connection, the universal connection with the whole. This whole can be nature, history, its own being (Najdysh, 2017).

Myth is a formula, so it reveals its possibilities of generalization when confronted with concrete facts. Given this, it can be assumed that one of the research tasks is the task of explaining the modern techniques of myth-making. Myth is not the only means of creating a picture of the world in the mass consciousness. And to identify the mythological content of mass consciousness with delusions, false perceptions, illusions is a deliberate simplification.

Finding and explaining the concreteness behind the myth is a condition for a realistic assessment of mass consciousness, free from extremes. And this requires a constant analysis of the facts, unbiased generalizations, objective data on public opinion and mindset of people (macroforms of mass consciousness). The evaluative approach simplifies the attitude to the myth in the mass consciousness and does not lead to the multiplication of knowledge about it. This leaves unanswered a number of questions that seem important in this problematic. The main of them, we believe, is the following question: the specificity of the influence of information and technological culture works to preserve the myth or to destroy it in the mass consciousness?

A non-judgmental attitude to myth and mass consciousness is the most constructive approach to the analysis of these phenomena. In its framework it is possible to:

The purpose of the study is to raise the theoretical problem of the connection between myth and mass consciousness in the aspect of their common nature. And also definition of possible ways of consideration of this problem. It takes into account the specificity of the influence of the information field and information culture in the digital era.

The methodological basis of the work is: (a) socio-philosophical analysis; (b) systematic approach, taking into account the interdisciplinary significance of the subject under consideration.

Myth-consciousness is a type of consciousness, always inherent in man at all times. What characterizes the essence of mythical consciousness? We can distinguish the following features.

a) Mythical consciousness is directly naive. Myth is not an idea, not a concept, but an image perceived as reality. Myth is not only a mediator between man and reality. It reveals itself as an independent reality that creates both a man himself and his world. Therefore, myth can be made a model for understanding many human phenomena.

(b) Life in myth carries its own truth. Myth rests on facts, on being, understood absolutely, dogmatically. For mythical consciousness scientific experience, scientific evidence is irrelevant. Therefore, hope for rational arguments from a bearer of mass consciousness is untenable. Mass consciousness, being realized in everyday life, turns questions into premonitions, and answers into dogmas. The interest of its bearer is not so much in the choice as in the mechanism of adaptation in a particular place and in a particular time (Habibullina, 2018). Even under the condition that the established way of life he considers unreasonable in terms of common sense, the algorithm of which comes into conflict with the practical side of the present. Therefore, the mythical subject cannot be convinced of anything. Truth is directly perceivable and commonly understood. Only myth can be fought with myth. One myth can create another, but it can also supplant it.

(c) For the bearer of mass consciousness, the nature of the spiritual and social criteria he accepts as his criteria is of fundamental importance. Mythic detachment is the detachment from meaning, from the idea of fact for the sake of a new meaning and idea. Divergence from everyday reality does not prevent myth from being reality. Reality in a myth remains in its usual version, only its meaning and idea change. Myth is a sensually created reality containing varying degrees of detachment.

The manifestation of mass consciousness in myth

(a) Questions about the emergence and historical existence of mass consciousness are among the debatable. Is mass consciousness a phenomenon of the modern era, the era of the massization of public life, or a phenomenon that has always existed at all times? Even if we assume that myth and mass consciousness do not arise at the same historical time, they will never meet. Myth, having ceased to be the only type of thinking at a certain stage of human existence, was preserved thanks to its merger with existence, with action. Myth as a form of thought is irreplaceable (Strel'nik, 2018). Consequently, initially vital intuition (mythological perception of real things) by virtue of its universality cannot but be present in the mass consciousness. Myth is the only possible foundation of private and public existence.

b) In mass consciousness, the "picture of the world" is created by different levels of reflection of reality. Many researchers argue that in the consciousness of the masses the analytical work of the mind does not exclude but is combined with a deliberate simplification of the vision of the world, with a craving for simple solutions, simple explanations. And this part of mass consciousness, as a rule, is identified with delusions, false ideas, prejudices, illusions, stereotypes. Myth is the result of direct, naive, comprehensible operation with real objects, with the most concrete phenomena. The experience of the bearer of mass consciousness is no place for experimentation. It may need changes in information, but not in the quantity or at the pace currently set by digital technology. So, the question arises: what is mass consciousness in the information world?

(c) Syncretism of myth and mass consciousness explains their informational and communicative nature. The presence of this property (the inseparability of object and subject) makes possible the identification of oneself with others. When a person realizes his belonging to the mass in behavior, it is identical with the behavior of others in this mass (Gritsenko, 2019; Volokhova, 2020). The identification mechanism underlies mass behavior, just as it underlies the behavior of the mythical subject. The property of syncretism allows us to explain the regularly recurring situation in the crisis state of society. The real in mass consciousness is not only assertions of something as existing, but also assertions as something that does not exist. The latter acts in mass consciousness as a prohibition that asserts the possible boundaries of existence, and through this indicates the existence of non-existence. The world is presented as an image-sensual integrity. And at this level, there is nothing superfluous, nothing unnecessary. The most striking example of this thinking is mythmaking. Mass consciousness is both the sphere of myth creation and the sphere of myth existence. It is myths that serve the interests of protecting social identity, helping to spread a certain system of values, promoting reforms. And they do it effectively. Lack of information at the level of mass consciousness is usually compensated by rumors, assumptions, guesses, speculations, previous experience, intuition. People accept information to the extent that it is consistent with the myths they have. When there is a feeling of hopelessness, hopelessness of the future, when there are no reference points, clarity and precision of a myth makes people "work miracles". On the part of the masses, what is important is not faith in a miracle, but the readiness to believe that a miracle can happen. The feeling of a miracle or its proximity is a necessary condition as a motive for action (Losev, 2001). The functional meaning of myth - the ability to rally people and motivate them to action - comes to the fore during the search for concrete solutions to vitally important problems (Heatherly et al., 2017; Plotichkina, 2020).

(d) The content of mass consciousness is determined by two criteria. The first is the average level of development of the consciousness of the masses in society: the boundaries of the cumulative "subject range" falling within the field of view of this consciousness. This characteristic includes not only cognitive moments - the volume of knowledge and the ability to judge the masses, but also the volume of their feelings and imaginations, abilities and skills, their ability to respond emotionally to reality, to operate with the material objects of the surrounding world. The second criterion is the needs, demands, interests that distinguish the life of the masses in different societies. Objects of reality that are directly or indirectly covered by mass needs arouse mass interest. Mass consciousness, possessing absolute syncretism, transcends the boundaries of modernity. Perhaps, this ability to transcend temporal boundaries explains the commonality of mythological motifs in the minds of people of different historical eras. It is likely that different reasons determine the possibility of entering the "subject" of reality in the mass consciousness. The main, in our opinion, is the ability of myth to be an ideal stimulus for social behavior. Therefore, it would be correct to assume that myth is the true beginning of human actions. Such an assumption looks quite logical. Recall that myth is not created by reason; it is brought to life by a certain affect.

Aspects of the connection between myth and mass consciousness can be distinguished according to the following positions:

In the nature of mass consciousness and mythmaking one can find common features: