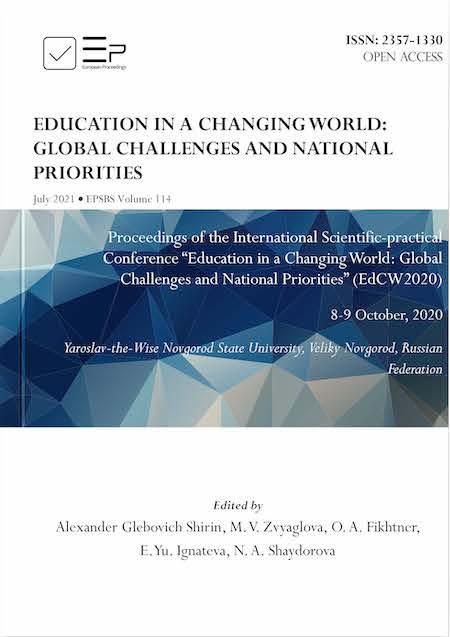 The article examines the intergenerational conflict that is central to Westernized educational spaces, which is actively visualized in the tradition of American horror films. Educational socialization forms a rigid system of stratification, which is subsequently perceived by children and young people as a natural form of social communication. Such models of socialization are based on a system of disciplinary coercion, which provokes an increase in aggression and destructiveness in educational environments. The idle consumer practices of adolescents and young people compensate for the consequences of disciplinary socialization. Realizing their own cognitive interests, the child opposes himself to the model of school socialization, automatically turns into a deviant personality, which undermines the disciplinary strategies of the school and the consumer attitudes of the entire American society. Reflection of an American horror film about this situation is reduced to demonstrating the monstrous nature of the teacher, personifying the disciplinary nature of civilization and mass culture. The terrible images of teachers testify to the acuteness and insolubility of the contradictions between generations, and the strategy of destroying opponents and the entire disciplinary environment seems to be the only way out of this crisis. This ideological substitution forces all participants in disciplinary educational spaces to produce and widely exploit simulacra in everyday and normative communication strategies, which leads to a complete disregard for the creative and cognitive potential of young people and makes it impossible to broadcast the experience of the older generation.

The search for universal mechanisms of human adaptation to the civilizational environment constituted the strategic task of more than a dozen significant social institutions, the leading positions among which are traditionally occupied by politics, pedagogy and art. The fact that various social spaces devote their efforts to creating and working out these mechanisms allows one to focus both on the various abilities of the individuals themselves, and on a wide range of contexts of their emergence and development. Taking into account such diversity is one of the leading principles of the effectiveness of social management, designed to minimize the emergence and development of destructive phenomena that can destabilize or even completely destroy social space. At the same time, the union of politics, pedagogy and art turned out to be far from accidental, since the formation of modern media culture provides unique managerial opportunities for the formation of predictable behavioral reactions of entire generations. While pedagogy traditionally relies primarily on the rational abilities of children, which are comprehensively developed within disciplinary educational spaces, politics, especially modern ones, increasingly prefers to flirt with a person, subtly exploiting his unconscious needs and desires. It was this moment that led to the persistent interest of the authorities in art, which historically was engaged in the production of specific artistic material, to a greater extent connected precisely with the manifestations of the unconscious nature of man. Modern artistic images are increasingly proving to be much more vivid, convincing and effective arguments than the abstract rational schemes that are commonly used in pedagogy. And visual culture, thanks to new technological capabilities, is beginning to acquire unprecedented popularity and can fully compete with politics in terms of the degree of influence it exerts on the minds and moods of the masses. The main paradox of the post-industrial era can be considered the fact that it is the marginal and destructive images that always surpass the popularity of the plots of historical films, melodramas and comedy films. Therefore, it is not surprising that an American horror film, constantly telling about the difficulties and tragedies on the path of school socialization, becomes an example of extremely successful scenarios for visualizing systemic problems in disciplinary educational spaces, which equally relate to both pedagogy itself and leading political and administrative structures. This situation gives rise to a stable symbiosis of the three above-mentioned institutions, the interaction of which makes it possible to create and promote in the space of stereotypes of the younger generation a stable illusion about its future civic and professional viability, as well as social relevance.

Traditional educational socialization has always relied on a system of disciplinary coercion, which gave rise to a natural response aggression from adolescents and young people. In order to minimize such destructive phenomena, the modern American educational system everywhere borrows and implements idle consumer practices that allow us to overcome disciplinary pressure and form a loyal consumer citizen. The conflicts arising in the course of the implementation of this contradictory and complex task become the main content of the Hollywood youth horror film.

The article will address the following problems:

determining the reasons for the transformation of the modern school into the epicenter of the social processes of the consumer society;

identification of the degree of influence of modifications of the economic structure on the nature of changes in educational processes;

analysis of the reasons for the transformation of education from a system of acquiring knowledge, skills and abilities into a service sector;

establishing the reasons for the transformation of disciplinary educational spaces into leisure institutions of the consumer society;

analysis of Hollywood scenarios for the opposition of archetypal heroics to the practice of leisure socialization of youth.

The article is devoted to the consideration of the influence of idle consumer practices of adolescents and youth, actively introduced into the system of school socialization, on the change in the disciplinary nature of educational communication.

The study of Hollywood horror films is one of the promising directions in Western humanities. These studies are represented by various interdisciplinary scientific traditions that have demonstrated the new content of postcolonial research. Among the most philosophical approaches to studying this phenomenon are the texts of Carroll (2018). It was he who, relying on a semiotic analysis of this genre of cinematography, sought to identify symbolic analogues of the socio-cultural contexts of the postmodern era, contained in film works. In addition, the American horror film initially possessed not only purely aesthetic functions, but also carried very significant socializing meanings, which were continuously attributed to it by popular culture. Thanks to the critical assessment of the representatives of the Frankfurt School and neo-Marxism, a horror film today qualifies as a special ideological form of socialization of the younger generation. Jameson (1991) naturally pointed to the parallels in the study of American horror films with the functioning of the concept of “political unconscious” proposed by him. Thus, Jameson qualified the cultural codes of Hollywood horror cinema as a strategy of direct ideological influence on the mass audience.

It is significant that the tradition of viewing horror films as a unique cultural text is also continued by Anglo-American “Cultural Studies”, since such an interpretation allows us to cover the widest possible spectrum of manifestations of this genre (Fortuna, 2018; Power, 2016). The methodology for analyzing the ideological meanings of the visual socialization of young people also requires detailed psychological and pedagogical study. Therefore, Herskovits (1955), who proposed the term inculturation, develops a methodology for analyzing cultural phenomena that are presented in conscious and unconscious forms. It is cinematography and horror films that make it possible to broadcast general cultural attitudes that are assimilated by young people uncritically, and therefore turn out to be the most productive just at this age. In this vein, the methodological premises of Veblen (2018) are extremely useful, who, studying the American reality of the 19th century, in his book “The Theory of the Leisure Class: An Economic Study of Institutions”, published in 1899, determined that socialization strategies are determined formed by the upper classes by the fashion for careless, idle and consumer pastime. Therefore, in the context of the study of the disciplinary practices of the American education system, Veblen's studies are of exceptional methodological value. The socializing potential of cinema was at one time highly appreciated in pedagogy, and therefore gave rise to a separate direction called “cinema pedagogy”. In this regard, Walker (2016), Cole and Bradley (2016) reasonably believe that the study of cinema and horror films is of exceptional value due to the fact that they form a critical attitude of young people to the surrounding socio-cultural space and contribute to the formation of skills to distinguish between ideological and non-ideological forms of communication. In addition, Grunzke (2015) and Lawrence (2016) found that horror films, through shock therapy, actively exploit the biotic moments of communication of the younger generation.

The models of educational disciplinarity that have been consistently formed since the Middle Ages are designed to sublimate the institutionally surplus energy of youth at any cost. However, in the conditions of the dominance of the values and attitudes of the “consumer society”, they inevitably reduce it to idle forms of ideologically neutral and politically safe within and intergenerational communication. The social purpose of such practices is reduced to the creation of a predictable and controlled institutional environment, which is aimed at the propaedeutics of youth moods and actions that contradict the leading political-ideological, socio-communicative and educational trends. Therefore, the school in the United States is at the forefront of the implementation of the ideology of the “American Dream” domestically, as well as the strategy of “Pax Americana” around the world. The creation and promotion on a nationwide scale of a space of carefree and entertaining everyday life for young people makes it possible to safely and profitably channel their natural energy into a profitable, neutral and politically correct channel. The American horror film constantly emphasizes the fundamental nature of mental and civilizational contradictions, which once arose in the process of school socialization, later only reincarnated from film to film, each time reviving the horror “for future generations of viewers” (Power, 2016), which “bursts into our everyday life making it impossible to get out of this experience unscathed” (De León Ramírez, 2018, p. 230). Nevertheless, the ideological value of this cinematic genre, which explicitly condemns “authoritarianism through its villains” (Goodall, 2020, p. 123), lies in the persistent desire to visualize the deep contradictions between the individual creative impulses of each the student and the averaged, impersonal functionality of the entire system of disciplinary civilizational communication. Thus, the American school and Hollywood horrible cinematography, by their joint efforts, fulfill the ideological order of the authorities, they are carefully working on the formation of a set of basic conditioned reflexes that guarantee an expanded reproduction of the leisure and consumer model of patriotic consciousness and loyal behavior, which in relation to the individual are collectively designed to “prevent his active social activity, development consciousness and feelings other than mistrust, fear and hatred” (Malenko & Nekita, 2020, p. 76).

The reported study was funded by RFBR according to the research project № 18-011-00129.