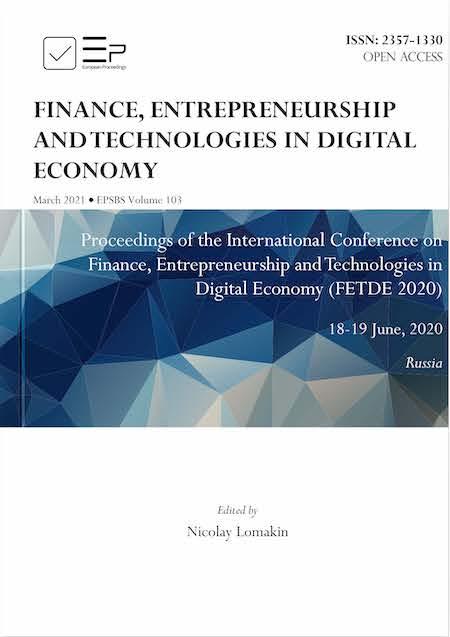 The current state of development of the global economy is associated with increased mobility, the flexibility of economic resources, and the transformation of traditional aspects of the economic system into a digital economy. This leads to the emergence of the information society (Dyatlov, 1995) and the formation of competitive advantages. The country's competitiveness in the world market and the degree of its integration into the world economy depends on the efficiency of enterprises (Kostin & Berezovskaya, 2019).

Their activities are characterized by the deployment of a new technological wave - the fourth industrial revolution (Schwab, 2016). The connection between high-tech industries and the digital economy increases the relevance of the development of high-tech enterprises in order to adapt the business sector to a changing digital environment (Kostin & Berezovskaya, 2017).

The digitalization of the economy is considered as a key driver of innovation, economic growth and societal change (Afonasova et al., 2018). The main feature of the digital economy is its key production factor – the digital data (can be expressed as big data see for example: (Trofimov & Trofimova, 2018).

From the point of view of the socio-economic space, the digital economy is an economy whose main goal of development is to improve the quality of life of the population by reducing the cost of living, the emergence of new opportunities for the development of human potential, and the expansion of the accessible environment for people with disabilities. Accordingly, the digital economy presents new requirements for a person, such as the ability to work with information and communication technologies, use the new capabilities of the digital space for professional and personal needs (Bakumenko & Kostromina, 2018).

Therefore, quite often the digital economy appears to a greater extent as a non-economic phenomenon related to the production of goods based on the use of digital technologies in scientific studies (Zaitsev, 2019).

The digital economy in the narrow sense is that part of the economy that is represented by companies working primarily with digital technologies and whose business model is based on digital products or services. This sector consists of the digital sector itself, together with promising digital services and platform services (Bucht & Hicks, 2018).

The analysis of international experience revealed that, despite the obviously increasing role of the internet sector of the economy, there is still no universally accepted methodology for measuring it (Plaksin et al., 2017).

The need for an objective analysis of the functioning of the digital economy is determined not only by the degree of prospects of investments in the transformation of its activities from the traditional sector into the digital one, but also by the very dynamism of economic development in the neural network era (Kostin & Berezovskaya, 2019a,b). Unfortunately, modern methods for relevant performance assessment do not cover the whole range of indicators of the development of the digital economy.

While study was performed, the main sources of initial data were materials from articles published in journals indexed by the Scopus and Web of Science databases; analytical reports of international organizations; statistical and analytical materials published in official electronic resources.

The main research methods used in this article include: a systematic approach, retrospective and perspective analysis, heuristic and econometric modeling, and statistical experiment.

The analysis is carried out by comparing the obtained indicators (calculations according to the Bela Ballas formula adapted to the needs of the analysis) with reference values (the value “> 1” - score “+1” the country under investigation has a comparative advantage above other countries; “= 1” - score “0” – the country’s position is relatively average compared to other countries, “<1” - a score of “-1” – the country under investigation is at comparative disadvantage in comparison to other countries). The final level of development of the digital economy can range from -7 to +7.

Taking into consideration that the analysis is carried out not only in the “export” category, the maximum value for the analyzed indicator is substituted for the value replacing “export of the product from the country” (for example, China has the highest value for the “High-tech goods export” indicator (30.9 %), and it is this value that will be the denominator in the calculations. The Bela Ballass formula, adapted for the needs of analysis, will look like this:

the comparative advantage of the countyy (2)

a). The indicators for the calculations are shown in table .

Table presents the comparative advantages of Russia relative to the selected countries according to the indicators proposed in table .

Based on the data in table , we can conclude that Russia has comparative advantages in all respects among countries such as India and Indonesia; by such indicators as the “Networked readiness index”, “ICT Development Index values”, “E-government development index by country”, “Global ranking Global Cybersecurity Index”, “International Digital Economy and Society Index” - among China and Brazil. Also, in terms of the Networked readiness index, Russia has the same level as France.

The final level of the digitalization level in Russia in accordance with the proposed calculation method is -2.285 in comparison to other countries under the investigation framework. Given the boundaries of the values that the indicator can take [from -7 to +7], the level is not high enough. Based on the findings, the main indicators that need to be further enhanced in Russia are the export of high-tech goods (in % of industrial exports); and R&D expenditures, in % of GDP. With this in mind, further development of the digital economy of Russia is possible via activation of high-tech industries and entrepreneurial activity in this area. Investments in R&D also play an important role in improving the level of digitalization of Russia.

The theoretical and practical significance and scientific novelty of this article is in the following: the authors formulate a methodological framework to measure the level of digitalization in Russia in comparison to other leading countries. The proposed framework lies the foundation for the development of relevant methodology for assessing the depth of digital economy penetration. The main features that distinguish it from the existing methods for assessing the development of the digital economy include the fact that the calculations are carried out using the Bela Ballas’s formula adapted for the needs of analysis, which makes it possible to evaluate the comparative advantages of the digital economy of Russia in relation to other countries. The method was tested utilizing the relevant data set representative of the digital economy level of Russia in comparison with the indicators representative of the digital economies of China, the USA, India, Japan, Germany, Indonesia, Brazil, France, Great Britain.