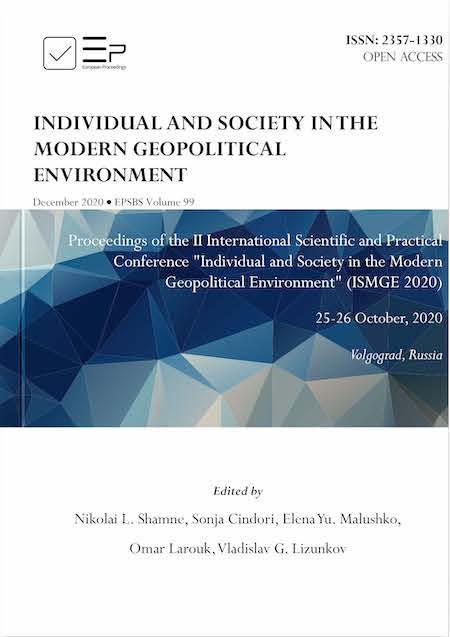 This article deals with issues related to active processes occurring in the vocabulary and terminology of document support of management based on the material of the modern Ossetic language. Ossetians are a relatively small people (about 700,000 people worldwide), and the number of speakers of this language is decreasing every year. To change this situation, Ossetia has adopted a government program of national and cultural development aimed at supporting the language and expanding its functional capabilities. The activities of this program include inventory, ordering, classification of the nomenclature of terms for document support of management, creation of standard documents of various types, dictionaries and reference books that contribute to the development of the functioning of the Ossetic language in the official sphere, training of public servants and public officers in modern business Ossetic language. For all these activities is the first step to conduct research work to describe the capabilities of the vocabulary of the language to service the field of document management and document support of management, to select and systematize terms, to study the word-formation potential of the modern Ossetic language in both its ironskiy and digorskiy dialects, to create cliched forms and turns to unify standard documents and eliminate difficulties in compiling unconventional forms. The identification of general trends in the neologization mechanism of the document management language seems to be a fairly necessary procedure in this situation. To date, there have been no such studies in Ossetian studies, and this article partially fills this gap.

One of the most relevant topics for the national languages of the small-numbered peoples of the Russian Federation remains the formation, normalization, and development of terminological systems to expand the functionality of these languages, to overcome the lag in the vocabulary of the language compared to Russian, which the bilingual society knows much better.

Russian is threatened by the total borrowing from English, which currently dominates the world, but for the titular ethnic groups of the national constituent entities of the Russian Federation, this source is the state language, which is used for all document support, and which serves all spheres of activity, namely, Russian.

In recent years, specialists in the Ossetic language have been carrying out several activities that have significantly improved the potential of the language's functioning to supplement the terminological systems in various fields of activity (Senko, 2019a). Terminological and translation dictionaries were published, which significantly expanded the vocabulary of the Ossetic language. They reflect both the industry terminology that has existed up to now and the new terminology that has emerged as a result of the development of science and technology, as well as modern socio-political and cultural processes. There are positive trends in how neologisms are introduced into the Ossetic language. If up to this time new words and combinations were mainly represented by borrowings, then in new lexicographic publications we see more lexical units formed by the means of the language itself (Senko, 2019b).

In general, the terminology of document management in Ossetian linguistics remains one of the least developed problems, so the study of active processes occurring in this term system is relevant. There are very few special works devoted to the issues of document linguistics, management terminology, and office dictionaries. The authors of this article considered this topic in a series of publications on terminology, in particular, they described the innovations that appeared in the Ossetic language in the sphere of related management activities – socio-political, economic, legal. We also devoted a more detailed lexis analysis of archives and records management to the work "Lexis of management activity in the Ossetic language" (Gatsalova & Parsieva, 2019). For the first time, about three hundred terms of the mentioned branch were put into circulation for the Ossetic language.

Despite the recent upsurge in Ossetian lexicography, including the one that reflects the terminology resources of the language, document management remains the branch with the least attention paid to the term system.

The press is published in the Ossetic language are created fiction books. Ossetians widely use their native language in virtual communication in social networks.

The vocabulary study that has left the framework of non-usual use and has become a currency and relevant is especially representative of the material of media discourse (Gureeva et al., 2016; Mityagina, 2014; Novozhilova et al., 2015). The current status of speech culture both Russian and Ossetian languages are determined by several mutually dependent factors, primarily extralinguistic since language is a socio-cultural code that reflects the state of society and its world picture. This picture is most clearly projected by the vocabulary is the most mobile language structure (Ilyin & Sidorova, 2019; Ilyin & Solomka, 2018; Isaeva & Isaev, 2010; Morgoeva & Tsallagova, 2018; Morgoeva & Tsallagova, 2019; Tsopanova et al., 2019). The identification of language use and its frequency indirectly, but accurately shows us the whole picture of social, cultural, economic, and political changes currently taking place in a particular society (Gatsalova & Parsieva, 2015). The management area is a fairly open system that depends on the transformations taking place in society that is directly related to the regulation of the activities of government services, executive and legislative authorities in society (Kudzoeva, 2014).

This research aims to solve several problems relevant to modern Ossetian linguistics. The authors define the corpus of words and phrases missing in lexicographical publications with the meaning of the name of a person, position, authority or institution, historical event or an official holiday, etc., describe a significant number of clerical and cliched expressions of the official style of speech in the Ossetic language. Special attention is paid to recent trends – the introduction of words and lexical phrases into the Ossetic language, which appeared during the COVID-19 pandemic

General purpose of the study

In a broader context, the study suggests solving the question of the possibilities of the Ossetic language when using it as a means of document support of management and document management, whether it has enough lexical and derivational potential to serve the official style.

In a narrow sense, the purpose of this study is:

Fixing new lexical items is of great importance for updating dictionaries of neologisms, translation and defining dictionaries, terminological dictionaries of specific industries. Recently, the vocabulary of document management can be distinguished by novations that are actively used in the usual field of the language.

Let's consider the main trends in active processes occurring in the lexical system of the Russian and Ossetian languages of the modern stage, which can be characterized by its socio-cultural characteristics as a pandemic period. Global changes taking place all over the world, in one way or another, affected absolutely every individual, affected the socio-economic and cultural aspects of society. Therefore, language is a mirror that reflects all the transformations taking place in society has shown its activity and flexibility, becoming a tool for effective communication in a difficult historical period. This mobility is best seen in the example of media discourse, the content of which has become the material for this research. As the most characteristic for detecting changes occurring at the lexical level in modern Russian and Ossetian languages, we studied the media sites of the Republic of North Ossetia-Alania-the newspaper "Рæстдзинад", the national television "Ossetia-Iriston", the website of the South Ossetian newspaper "Хурзæрин", the news feed Мail.ru and Yandex.ru, social networks Instagram and Facebook.

The study revealed that the business Ossetian language includes words and stable collocation that are not reflected in the currently available dictionaries, since they appeared in the language relatively recently, as well as phenomena, concepts, and objects that they denote (Senko, 2019c). For example, the Republican Ossetian-language Newspaper "Рæстдзинад" (2020, May 29; 2020, June, 5) uses the following innovations (we specify them by thematic groups integrated with the document management field):

The next group of novations " is very heterogeneous in its semantic composition, so we have divided it into subgroups.

Many difficulties are caused by expressions included in the thematic categoryThey are caused by a different word order than in Russian. For example:

However, not all the names of this group are built in this order. There are others, for example, the combination "First World War" is translated in Ossetian in the same order – "Фыццаг Дунеон хæст".

In the modern Ossetic language media space, combinations of words are often used, which are necessary to enter into lexicographic publications, since it would be difficult to carry out document management without such cliched expressions.

Their neogenicity is not obvious, but their absence in dictionaries reduces user interest and complicates the process of business communication, in particular, the preparation of business letters and other documents.

The language trend of recent months is the entry of a significant number of lexical units semantically related to the news dominant – the pandemic-into the Russian language as a whole and into the vocabulary of management activities. The ways of neologization and mechanisms of word-formation are traditional: borrowing and proper means of the language (calques, half-calques, word formation), less often new words, and stable combinations appear due to the reinterpretation of the meaning of existing words.

The study results showed that the media discourse content from March to May 2020 has undergone significant changes, expressed in the flooding of the Russian and Ossetian languages with medical terminology and vocabulary close to the medical industry.

The Ossetic language has also recently included many lexical units related to the pandemic. Some of them are borrowings from English through Russian, while others are words and expressions created using the Ossetic language itself. For example:

Summing up, we note the sufficient activity of the Ossetic language in producing constructions that replace borrowed words in official speech and the field of document support of management. This is evidenced by numerous examples from the Ossetian media space. In recent times, the Ossetic language continues to be an effective communication system that can respond to the needs of modern society.

The reported study was funded by RFBR according to the research project #18-012-00440 “Active processes in vocabulary of multi-structural languages: internal development and external interaction”.