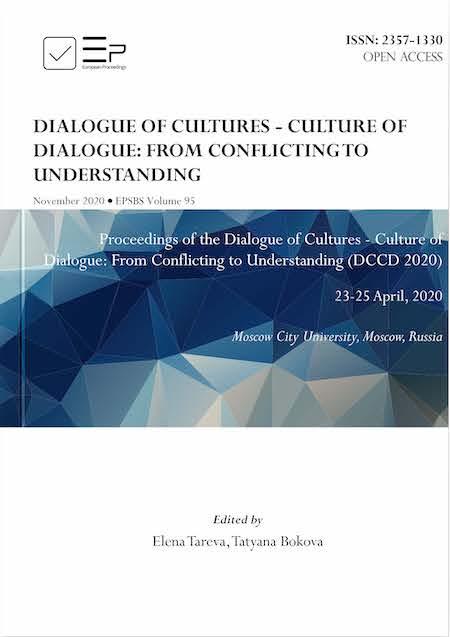 In the current decade, creative industries are actively developing in megalopolises of the world, forming a creative capital in the society.

We are interested in studying social and cultural centers – edutainment centers that implement developmental programs for children at the intersection of education and leisure. (). Edutainment centers include Cities of professions, Science parks, Interactive museums. Such centers support certain standards of sociocultural activity based on a dialogue of cultures. Sociocultural institutions such as edutainment centers influence the development of a new generation of children, forming a new culture of interaction and communication in children (Harper-Scott & Samson, 2009).

To assess the contribution of creative industries organizations to the development of the cultural capital of cities all over the world, PwC and the Calvert 22 Foundation (supporting innovative projects and creative industries) annually present an index of urban creative capital (“PwC, Calvert 22…”, 2018).

Judging by the generalized results of a survey conducted among parents, a problem emerged: what factors make the cultural environment of edutainment centers different from the cultural environment of schools. Why do parents think that edutainment centers are more likely to develop dialogue and sociocultural competencies in children than traditional schools?

The reflection on the research problem allowed us to formulate research questions:

- What development programs are implemented by edutainment centers in Russian cities (according to RWC rating)?

- How do these programs condition the development of dialogue and sociocultural competencies in children?

The purpose of the research is to study the specifics of dialogue culture in working with children in edutainment centers and to identify the features of the development of dialogue (communicative) and sociocultural competencies in children through edutainment programs.

Edutainment industry developed in the process of transforming the traditional system of continuing education in the search for answers to the challenges of changing cultures, including a new culture of childhood, a new generation of children. The edutainment form is an integration of education and entertainment (the word consists of two words “education”, “entertainment”).

The methodological basis of the study was:

The combination of the above methods allowed us to objectively answer the set research questions and reach the research goal.

The study involved 170 edutainment centers from all over Russia. Of these, 65 cities of professions, 85 interactive museums, 20 science parks. All edutainment centers are developing according to the principle of a network organization, the centers of which are represented in different cities of Russia, but in a single network.

Representation in the study of organizations by the main activity formats:

1) cities of professions — a network including: Kidburg, Kidspace, Kidzania, Masterslavl, City of Masters, City of the future;

These organizational forms of edutainment centers are developing throughout Russia in the legal framework of franchisee agreements, in the above-mentioned cities, too. According to the foreign franchise in Russia, there is only one city of professions (Kidzania). An example of the largest network of occupational parks at the global level is Kidzania (24 parks in 19 countries).

The largest all-Russian network of profession towns is Kidburg (11 parks across Russia: 4 in Moscow, 2 in St. Petersburg, 1 in Rostov-on-Don, 1 in Yaroslavl, 1 in Voronezh, 1 in Nizhny Novgorod, 1 in Vladivostok).

Interactive Museum "Galileo" is located in 6 cities: Yekaterinburg, Chelyabinsk, Novosibirsk, Krasnoyarsk, Nizhny Novgorod, Samara. Programs for children in Galileo are built on the cognitive principle of scientific and educational paradoxes. Pondering paradoxes, children set up experiments, embodying their hypotheses on the interactive exhibits of Galileo.

New practices of edutainment centers create a new developmental culture for children: both a new interactive culture and a new culture of education and leisure. In such a culture: a child is an active subject of dialogue, educational, leisure and sociocultural activities. In edutainment centers, through specialized programs, children develop dialogue (communicative) competencies and sociocultural competencies. Development occurs through the inclusion of children in the activities of a multi-ethnic team, endowing them with playing roles of representatives, scientists or politicians, from different countries, different scientific communities or professions. Thus, entering into a multi-position dialogue during the game plot (professional — in the cities of professions, or scientific-research — in science parks and interactive museums), children are immersed in a new dialogue culture and themselves realize a dialogue of cultures.

The rules of the dialogue of cultures and the culture of dialogue in edutainment centers are formed not only for children, but also together with them. It means that, before starting the edutainment program with children, the game engineer discusses how to interact, how to solve possible conflicts, what is the ethics of the dialogue. During the implementation of the edutainment program, the tutor observes communication in a group of children, advises, acts as an intermediary in difficult communication moments of game stories about professions or studies.

Edutainment technology is based on such organizational and pedagogical techniques as:

Event-Based Learning, an approach in an organization when the implementation of an edutainment program is built on events. Such events may include research expeditions, scientific or career festivals, intellectual competitions, achievement fairs, etc. Coexistence is realized through the dialogue activity of the game engineer from the edutainment center and children.

Learning Through Storytelling (Gina, 2019), a way to build an edutainment program as a story. The construction of a storytelling plot can be arranged in the form of scripts for comic book expeditions, online correspondence, route task sheets, movie scripts, etc.

Going beyond or overcoming threshold concepts, a pedagogical method that changes the threshold ideas of children through paradoxes, encourages children to look at the problem under study with different eyes (for example, through absurd reasoning to show how chemical and physical processes manifest themselves every day in the kitchen; this technique helps to connect science with practice.

Thus, we can generalize the structure of the development of the edutainment industry and the practices they implement for developing the dialogue (communicative) and sociocultural competencies of children. At the same time, edutainment centers are places of a new culture of dialogue with the child through the initiation of their subjective position, the right to choose a program, choose a game scenario, choose a profession to try, choose a role in a game plot through a dialogue with a tutor-gamer and dialogue reflection with a tutor- game technician.

The culture of dialogue with the child in edutainment centers is based on recognition of the subjective position of the child, respect for the child's choice of ways to achieve the goal.

Sociocultural competencies in edutainment programs include the ability of children to navigate the world of the culture of professions, science, sociocultural self-determination and make individual choices.

Cultural evolution is associated with the creation of sociocultural opportunities for the development and realization of human potential.

The school as a traditional institution does not cope with the challenges of a changing childhood, requests for the development of future competencies.

Based on the implementation of the priority areas of the Strategy for Scientific and Technological Development of Russia, a search is made for the answers of Russian society to big challenges, taking into account new technologies, social institutions at the present stage of global development using the methods of the humanities and social sciences.