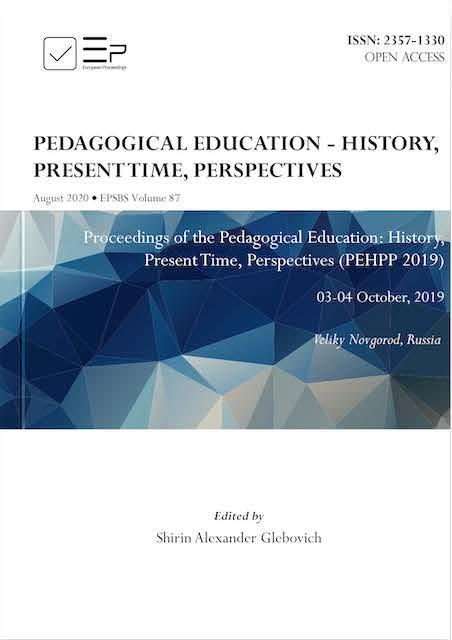 In society, the successes of a person and their self-realization in various types of activities are mainly associated with their ability to establish productive contacts and carry out effective interaction with others in order to achieve personal goals and implement socially significant ideas.

Communication is the main way of interaction between people, of receiving and exchanging information, of self-expression, of the formation of beliefs, worldview, etc. Thus, communication is one of the most important characteristics of a modern person. The formation of an individual as a person, their success in the social, personal and professional spheres largely depend on the effectiveness of the individual's various styles of communication and how they are implemented in various situations.

The works of Makarova (2018), Rud (2008), Bogdanova (2019), Bauman (2015), Chuchkova (2007) and other researchers are dedicated to the theoretical aspects of communicative culture. At the same time, certain differences can be noted both in approaches to the definition of a communicative culture, and in the methods of its diagnosis.

The communicative culture of adolescents largely reflects the main features of national and group communicative behavior; however, it contains certain individual traits that are formed under the influence of hereditary factors, temperament, character, upbringing, intellectual and social development.

In the modern world informational diversity is intensifying, which is associated with increasing streams of diverse information, including scientific and educational nature, modern methods of obtaining and processing it, the significant influence of information sources on the way of thinking, worldview, and the nature of interpersonal and intergenerational communication.

Information diversity is a source of development of social, educational and communication systems on the one hand, but creates a large number of pedagogical problems, on the other hand (Donina, Pevzner, Petriakov, & Shaydorova, 2018).

Thus, the low level of development of a communicative culture implies that a teenager has superficial ideas of the forms of communication and the characteristics of its organization. Such a person does not have a formed communicative ideal, lacks awareness of the importance of communication in social, personal and professional activities, indicators of communicative tolerance, interactive and perceptual abilities are not well developed. Direct communication causes difficulties for such individuals, which are accompanied by misunderstandings, conflicts, and a lack of understanding.

A high level of development of a communicative culture is characteristic for a person with a clear life position based on the principles of humanism, the preservation of honor and dignity, respect for the feelings and needs of others. This category of adolescents has developed a comprehensive idea of the nature, significance and styles of communication, organizational culture, they are aware of and comply with the basic requirements of a culture of speech, communicative tolerance. They have developed communicative, interactive abilities and skills (Nesterov, 2017).

The relevance of the study of the communicative culture of adolescents in the era of digitalization and informatization is due to the following circumstances:

Modern teachers and parents faced the problem of developing a communicative culture of adolescents in the era of informatization and digitalization, because today communication has changed due to the proliferation of virtual means of communication. Communication is becoming less and less “lively”, real, and more and more “chat”-like, virtual.

Such fundamental characteristics of real communication as length and time are distorted, in addition, virtual communication determines a new way of representing a person, which is reflected in various effects of mediated interpersonal perception and interaction.

The author of the article searches for answers to the following research questions:

While conducting this study, the author used an informational approach and a sociocultural approach, which made it possible to study the information sources used by modern adolescents and to define the concept of a communicative culture.

The information approach allowed for focusing on the use of information systems and technologies to obtain information important for managerial and pedagogical decisions.

In the study the author also used independent peer reviews and interview method. For this, several focus groups consisting of parents, teachers and adolescents were identified. The focus groups were asked the same questions regarding the level of development of the communicative culture of modern adolescents, and their need for its development. The interview involved 206 people, including 37 teachers, 67 parents, 102 teenagers from 14 to 17 years old from Veliky Novgorod.

To determine the real level of development of the communicative culture of adolescents, the questionnaire, which was sent to respondents through the social network “vk.com”, was developed. The questionnaire was created on the Google Disk platform and consisted of 20 questions. Respondents had to answer the questionnaire, and in accordance with the answers, the author was able to determine what level of communicative culture the respondent had. The survey was attended by respondents aged 14 to 17 years. The study used the online survey method, since the Internet provides anonymity, removes barriers to interaction which due to gender, age, appearance, social status, financial situation. Voluntary communication through a social network makes it possible to disconnect, delete a contact, interrupt communication in case of discomfort. In other words, Internet communication eliminates the need to take responsibility and make informed decisions.

In network communication, an important aspect of communication is limited: physical and emotional interaction with each other. A person cannot touch the interlocutor, hug them, look them in the eye, express their feelings through facial expressions or gestures. Therefore, for research, conducting a survey in a virtual environment was especially important, since for a correct assessment of the level of development of a communicative culture, it is necessary for respondents to respond honestly, without embarrassment or embellishing reality. The respondents' answers were processed using an electronic counting system, which ensured the reliability of the data obtained. As a result of the study, the author came to the conclusion that adolescents actively participate in online surveys (200 adolescents were offered to take the survey, 141 of them agreed and filled out the questionnaire), which is 70.5% in percentage terms.

The study identified some deficiencies in the communicative culture of modern adolescents. For example, it was noted that when writing messages on social networks, teenagers correct words only occasionally, and only those that the automatic editor underlines in red. Teenagers do not correct most of the misspelled words. Also, adolescents noted that they often use abbreviations, as this speeds up the process of writing messages and allows one to communicate with a large number of people at the same time.

According to the results of the online survey, it was found that approximately half of the teenagers surveyed sometimes show aggression towards other Internet users, since the Internet removes barriers to some extent and allows them to behave freely. However, some teenagers noted that they prefer to diversify their virtual communication through audio and video communications, pictures, emoticons, widgets and photos, which indicates a rather high level of communicative culture in a virtual environment. For the majority of respondents, “live” communication and virtual communication have the same value, which indicates that the Internet is firmly entrenched in the lives of modern adolescents and is an integral part of it.

Thus, the author concludes that the difference in assessments by different groups of respondents of the level of development of a communicative culture of adolescents indicates the absence of real mechanisms of interaction between all subjects of the pedagogical process aimed at the development of a communicative culture. The search for such mechanisms and means is a problem, and the efforts of both teachers and parents should be directed to the solution of this problem.