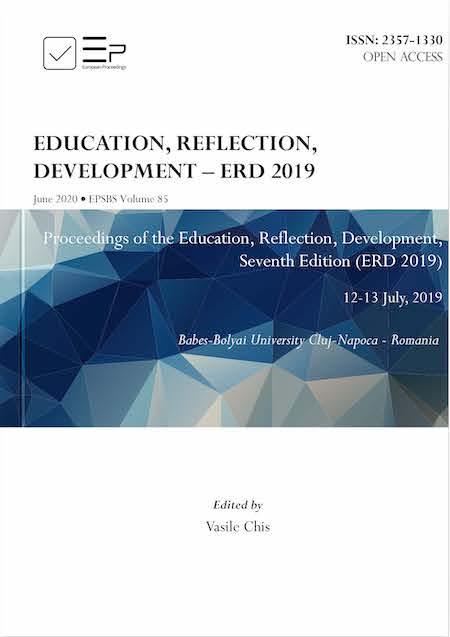 The objective of this research was to analyse didactic films made with the help of devices accessible to pre-university teachers and with a specific content for a field studied in primary and pre-school education. The proposal to realise didactic films using the smartphone was made to the students from the Master's Programme “Curricular Management” from the Faculty of Psychology and Educational Sciences at Babeș-Bolyai University, Cluj-Napoca and who work as teachers in primary education and pre-school education. In these didactic films, the teachers demonstrated how they conduct, through oral language, the activity carried out by children and how they expose various contents intended for them. The films made voluntarily by students were posted on the closed discussion group “Curricular Management Didactic Films” on the Facebook social network of which their colleagues from this study program belong. We analysed the process of making films, the characteristics of the films (duration, volume of information), the filmed learning activities (organizational forms, teaching methods and educational means used) and the students’ opinion regarding the films, expressed in the discussion group and in interviews. These didactic films are useful to develop didactics competence of teachers.

In higher education in Romania, there is interest for ensuring the conditions for academic success (Cuc, 2019b), for increasing the efficiency of professional development, evaluation and self-evaluation (Stan & Manea, 2015) and paying close attention to the professional practice, necessary for the desired integration in the labor market (Stan, 2016). During the pursuit of a profession, continuing education programs are considered an efficient means of professional development (Manea, 2015), adult education being a priority in European policies (Răduț-Taciu, Stan, & Bocoș, 2018). There are concerns for identifying educational strategies for training teachers to promote excellence (Cuc, 2012), for ensuring the well-being in learning and for using regulation mechanisms in the didactic activity (Cuc, 2019a, 2019c).

In the master's program “Curricular management” from Babeș-Bolyai University, during which courses are offered, in particular, to teachers in pre-university education, the aim is to develop their digital competences, with the purpose of adapting the didactic process performed by them to students / current students, called “digital natives”. This objective can be achieved by taking into account the interest of the Romanian teachers for the use of digital products in training (Magdaș, Vereș, & Dulamă, 2019), as well as the fact that the Romanian students allocate large time resources for browsing the Internet, with various goals (Dulamă, Magdaș, & Osaci-Costache, 2015), use various methods for searching online sources (Ilovan, Dulamă, Boţan, Magdaş, & Vana, 2016) and have developed various skills of documenting on the Internet and exploiting the identified sources (Ilovan, Dulamă, Ciascai, & Maroşi, 2015). The visual materials from web sources are used effectively in the study of geography (Magdaș, Ilovan, Dulamă, & Ursu, 2018; Ilovan et al., 2019; Ilovan, 2019). Discussion groups in the Facebook network are a way by which the teachers in the university education facilitate the students learning (Dulamă, Ilovan, Ciascai, & Maroşi, 2015; Dulamă, Ilovan, & Buș, 2016), as well as their evaluation (Dulamă, Vana, & Ilovan, 2016).

In the activity with K-12 and university students, their tendency to use different digital divides is noted (Dulamă, Magdaș, & Osaci-Costache, 2015). In some studies, it is mentioned that their attention is distracted by smart phones and other gadgets (Grecu, Deneș, & Ipiña, 2013). Smartphones and applications adapted to this currency are used in field discovery learning, for geographic data collection, for orientation (Ursu, Dulamă, & Chiș, 2019; Dulamă et al., 2019). Smartphone was used to make didactic films in which several didactic materials were used in order to facilitate the development of the skills of future geography teachers, within a closed discussion group from the Facebook social network (Dulamă, Ursu, Ilovan, & Voicu, 2019).

Students from the “Curricular Management” Master's Programme, who work as teachers in pre-university education, use smartphones for educational purposes to search information on the Internet, to communicate with students and their parents, to post visual materials (photos, movies) and information in the discussion groups of the students with whom they work and the members of their families. In this programme, the students share experiences, opinions and information that are useful in their professional development as teachers. At the beginning of their teaching career, we find teachers have some difficulties in designing and implementing the learning activities of pre-schoolers and students. In order to support them in understanding, designing and conducting learning activities, we have proposed to make short didactic films and to offer them to colleagues within a discussion group created on the Facebook social network called “Curricular Management Didactic Films” (see Figure ).

In this research, we propose to answer a few questions: What are the characteristics of the films made? What learning activities did teachers choose to film to give to their colleagues? What teaching methods did the teachers use in the filmed learning activities? How did the teachers use these methods? How was directed the learning of pre-schoolers and pupils in the activities filmed? What is the opinion of the masters’ students about the films made?

The purpose of this study is to analyse the learning activities carried out by primary and preschool teachers together with several pupils from the groups they work with, as well as the films made. In order to achieve the proposed purpose, in the year 2019, within the project “Capitalizing on advanced technologies within the support materials for teaching-learning in university education”, experimental activities were organized and filmed.

The didactic films were analysed by visual methods, and their content, by the method of content analysis and by the internal analysis of the text. The students' opinions about the process of making the films and their content we found through the interview method in which we adapted the questions to the context. The opinions expressed in the discussion group were subjected to an internal analysis of the content. The results were presented in the data tables (Magdaș, 2018).

In the research were involved 5 students from the “Curricular Management” Master's Programme, who made the didactic films and the 30 students who are part of the discussion group on the Facebook social network named “Curricular Management Didactic Films”. The authors of this study were involved in designing and organizing the experimental activity as teachers, in processing, analysing and interpreting the results.

The analysis of the making films process

The master’s students made 8 didactic films in mp4 format with the help of smartphones. The films were made in the educational institutions (a school in the Jibou city and two kindergartens in the city of Cluj-Napoca) by the colleagues of two teachers and 3 educators. After the demonstration activities were filmed, the authors watched the movies on the smartphone, then downloaded them on the laptop and sent them through wetransfer.com to the first author of this study. After downloading the films, they were viewed, analysed and subsequently posted on the discussion group “Curricular Management Didactic Films”. In order to make the films there were no written scenarios, but the teachers preferred to film authentic didactic activities, expressed opinion and in the first study realized in this project (Dulamă, Ursu, Ilovan, & Voicu, 2019). Making films is part of the category of experiential learning activities.

In Table are presented data (quantity of information, duration) about the films made. The longest activity is the assembly of the elephant (14 minutes), and the shortest one, of 1.25 minutes, the one regarding the completion of a graphic organizer (“The friendship”).

In Table , it is observed that the activities are organized in several ways: activity in group guided by teacher, individual activity in groups of 4 children, guided by teacher (1), activity in pairs (teacher-child; child-child). Regarding the teaching tools and materials used by pupils, we observe their diversity and appreciate that almost all were made with a lot of creativity by teachers. Regarding the didactic methods used, it is observed that only in one case the method of exposure associated with the example or the demonstration was preferred, in the other activities the main method was the exercise, even if the external impression or form was that of didactic game.

The learning activities carried out are included in three areas preferred by teachers and pupils (Communication in the Romanian language, Mathematics, Visual Arts and Practical Skills) (Table ). In the learning activities in the field of Communication in the Romanian language, the aim was to construct a dialogue (receive the oral message and formulate an oral message), make some sentences with given terms. The activities of Mathematics were aimed at identifying objects represented by drawing, placing objects in the position specified by the teacher, recognizing / identifying geometric figures, comparing and associating geometric figures according to color, shape and size, forming the set according to 1-2 criteria. The Visual Arts and Practical Skills mainly focused on the training and development of motor skills and abilities (cutting, assembling, gluing, manipulating objects using tools).

Regarding the teachers, we appreciate the clarity of the messages transmitted by them to the children, the accuracy of the presentation of the tasks that the children have to solve, the step-by-step management and monitoring of the activity carried out by the children, offering a positive, constructive feedback during the solving of the tasks and ensuring a children's self-assessments of the learning process and the products made. Regarding the pupils, we notice the fact that they have been involved responsibly in the activities, they have correctly solved the given tasks, and they have improved the way of working in response to the feedback given by the teacher. In all activities, a favourable climate was created for the cognitive and socio-emotional development of children, similar to the conclusions of other studies (Trifan, 2015; Trifan & Chiș, 2017).

The analysis of the master students’ opinion about the films made

Some of the opinions were expressed in the discussion group, and others in the discussions during the interview. The master’s students who made the films appreciated this experimental activity in which they shared with their colleagues from their experience regarding the organization of learning activities and the use of didactic materials made by them. The authors of the films answered the questions asked by the first author regarding the objectives aimed at being achieved by the children, the methods used, the capacities and abilities formed by the children in order to make the teaching process transparent for their group colleagues. Of course, there are some fears about exposing one's own professional image in front of other people, risk diminished by the fact that this discussion group is closed. Regarding the reaction of the members of the discussion group (total 30 people) we notice that each film was watched by at least 22 people and maximum 26 people. The fact that the members of the group were little involved in the group dialogue we explain by the fact that the created films provided them with all the information needed to take them as a model.

The development of the IT technology allowed that teachers from pre-university education in Romania could make didactic films with the help of smartphone in which they present the learning activities that they carry out with the pre-schoolers and with the students. The didactic films posted in a closed discussion group, intended for the master’s students of a program of university studies in the field of educational sciences, provide information on how teachers conceive and lead the process of children's learning. It is found that the teachers have a lot of creativity in designing the means of education and professional competence of higher level in organizing the learning activities, these being diverse regarding the form of organization, methods and didactic procedures, means used. We notice the teachers' preference to involve children in activities based on exercises and didactic games, in particular, mathematics games, activities that they manage step by step, ensuring an optimal learning environment.