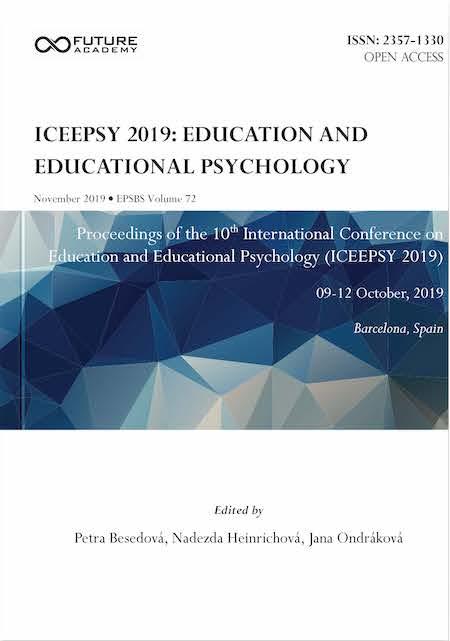 In the educational process, cognitive abilities are emphasized not only in relation to the pupil's school success, but also in relation to his / her positive motivation to learn. The aim of the theoretical contribution is focused on the possible diagnosis of cognition in children and on the method for determining the level of cognitive abilities in children and adolescents aged 7 to 16 years. The research method used is the analysis and comparison of existing research tools to determine the cognitive skills of primary school children. The diagnosis of cognitive abilities is predominantly within the competence of psychologists, so we see the possibility of using the Cognitive Skills Test in School Education as an important option. The content of the test allows a series of measurements of pupils' abilities to use and operate abstract symbolic relationships. The method is described and compiled so that it can be used for better diagnosis of pupils and teachers of primary schools, for example, to correct or adjust the choice of learning material for the benefit of the pupil (individualization of teaching).

Cognitive functions are an important area of the human psyche. Through cognitive functions, human perceives the world around him, acts, reacts and manages difficult life situations. Thinking is considered the most complex cognitive process. It is an inner mental process that cannot be directly observed. Thinking is generally defined as a mental operation with information that may go beyond the sensory given fact, because operations with evolutionary higher cognitive elements such as concepts apply. These then, as tools of cognition, allow cognition to develop further. In a broader sense, thinking can be defined as a process of processing and using information (Nakonečný, 2015; Plháková, 2005). The general structure of cognitive abilities is then described by the term intelligence. Thurston (in Balcar, 1983) has derived 7 basic factors of intelligence (the abilities that form its basis) by factor analysis. These 7 factors are readiness in perception, spatial imagination, memory, verbal understanding, verbal fluency, numerical operations and reasoning. Similarly, Guilford (1967) describes intelligence as properties consisted of many partial abilities, independent intellectual factors. Operations (ie. individual activities by which individual variants of intellectual abilities can manifest) divided into two main factors. The first one is memory, which means the storage of information and its re-equipping and usage. And the second is thinking, which is further divided into several components: cognition, evaluation, convergent thinking and divergent thinking. According to Guilford (1967), the factors of memory and thinking work in mutual interaction. The definition of intelligence is a large number and always varies more or less depending on the theoretical position of the author. In general, however, one of three important aspects is emphasized (Vágnerová, 2003): intelligence is defined as the ability to think; intelligence is defined as the ability to learn; intelligence is defined as the ability to adapt.

Cognitive abilities are examined in different contexts. Researches confirm the close relationship between general cognitive abilities and general learning abilities (Schmidt, Hunter, & Outerbridge, 1986; Unger, Keith, Hilling, Gielnik, & Frese, 2009). Danner, Hagemann, Schankin, Hager and Funke (2011) found that the level of cognitive abilities predicts professional success, success in science, technology, mathematics (Deary, Strand, Smith, & Fernandes, 2007) as well as in school education (Neisser et al., 1996). Cognitive abilities are often seen in the context of gender, which can be difficult because, on average, their performance achieves only a few points in the intelligence tests. Significant gender differences in mathematical abilities and spatial skills are usually reported in favor of men (Benbow & Armand, 1990; Feingold, 1992; Lynn & Irwing, 2004; Lubinski & Benbow, 2006). Cognitive abilities are also viewed from the perspective of ontogenesis. The most well-known theory is given by Jean Piaget, who discusses the principle of the development of thinking (Piaget, 1999; Piaget & Inhelder, 2014). The author describes with some simplification the four main periods following the period of development of sensorimotor intelligence. According to Piaget (1999), the onset of speech (1.6 to 2 years) begins the period of development of symbolic and pre-conceptual thinking, which lasts about four years. In this period, the child learns to use the language, where the use of characters creates the ability to imagine something through something else. This ability is completely new to the child (as opposed to sensomotor behavior). Thinking is egocentric (child sees the world subjectively, from his/ her perspective), the child does not yet understand certain activities and operations, is dependent on what perceives. From the ages of 4 to 7-8, visual thinking is created in close connection with previous forms, which gradually leads to the beginning of the operation. The main cognitive structures applied by a child at this age are egocentrism, centration (focusing only on one trait) and irreversibility (inability to progress back to the starting point of process). Between 7-8 and 11-12 years, “specific operations” are organized that can be manipulated or visualized. The child begins to understand the stability of the number (6 years) and the stability of the quantity (7 years), the ability to classify items by one feature still remains. Thinking becomes less egocentric, developing the ability to perform operations in the mind without linking to what is perceived. From 11 to 12 years of age and during adolescence, formal thinking is later developed, characterized by advanced reflexive intelligence. The child can logically think in abstract terms, uses creative deduction, the adolescent thinks of everything possible regardless of the present.

Cognitive abilities have been studied by experts since the beginning of the last century. The interest in studying the general bases of ability (intelligence) also had practical reasons. Since cognitive abilities were considered to be the basis for success in almost every activity, there has been a tendency to measure these abilities and create specific measuring tools. Cognitive tests gradually became part of the selection process as a prediction of success. The first intelligence test (designed by Alfred Binet) was developed in France in 1905 and was designed to preventively distinguish children who are expected to be successful at school and those at increased risk of school failure. The Binet’s test has undergone many modifications and is still used in various versions to this day (Vágnerová, 2003). At the turn of the 1920s and 1930s Vanya's Intelligence Test (VIT) was developed and was widely used in career counselling. Currently, the modified test is used to determine the intellectual level in the school environment, both to determine the intellectual level of whole classes (mass testing), as well as to determine the development of cognitive abilities that determine the school's achievement in individuals (Váňa, 1974). The tools to measure intelligence that gradually emerged, such as the Wechsler Intelligence Test for Children (Wechsler, 1991), Raven's Progressive Matrix (Raven, 1991), were and are exclusively the domain of professional psychologists. Thorndike and Hagen (1998) designed a tool called the Cognitive Abilities Skills Test (TKS) that teachers in every school can apply. Significantly, the results may enable teachers to know the children more deeply.

In the educational process, cognitive abilities are emphasized not only in relation to the pupil's school success, but also in relation to his / her positive motivation to learn.

Which contemporary research tools are the most suitable for diagnosis of cognitive abilities in children from primary-school in praxis?

The aim of the theoretical contribution is focused on the possible diagnosis of cognition in children and on the method for determining the level of cognitive abilities in children and adolescents aged 7 to 16 years.

The research method used is the analysis and comparison of existing research tools to determine the cognitive skills of primary school children.

The cognitive abilities test allows the assessment of an individual's abilities. It provides a series of individual measurements using abstract and symbolic relationships and manipulation with those relationships. The test is constructed on the basis that three types of symbols play a role in children's and adult thinking: symbols representing words, symbols of quantity, and symbols representing spatial, geometric or pictorial patterns. The test makes it possible to assess the ability to work successfully with each of these three types of symbols (Thorndike & Hagen, 1998). In this test, the authors attempted to emphasize interconnection thinking - to capture relationships between abstract parts in different areas and under different conditions. The word battery contains the following four subtests (Thorndike & Hagen, 1998): vocabulary, sentence completion, classification of terms, and verbal analogies. As practice shows, there are large inter-individual differences in children's vocabulary, speech composition and pronunciation. At school, the child learns to read and understand the language, which is initially very difficult and tiring for him. Writing and reading requires a complex interplay of the functions of analyzers, auditory, visual and kinesthetic, conditioned by the quality of sensory analysis and synthesis associated with complex neuropsychic processes (Mikulajová, 2018). Education is mainly dependent on verbal symbols, so the verbal test is suitable for the prognosis and diagnosis of education. The numerical battery consists of three subtests: numerical relations, numerical series, and equations. Solving problems in each test requires that the child have basic quantitative concepts, as each task requires understanding the relationships between concepts and flexibility in their use. The mathematical competences of children are defined as the ability to use generalization, the ability to concentrate on the task for a longer period without apparent signs of fatigue, as an instinctive tendency to approach problems differently, and even when the problem is resolved, the child should continue to seek alternative solutions (Borovik & Gardiner, 2007). In terms of education, in addition to verbal comprehension, the ability to understand quantitative terms is required; high requirements for the ability to work with numbers require subjects such as mathematics, science, accounting and economics (Thorndike & Haagen, 1998). The image battery consists of the following three subtests: image classification, image analogy, and image synthesis. The items in these subtests do not contain words or numbers, the geometric figures used have very little relation to school education. This battery measures what is commonly called fluid intelligence, an ability that is not associated with the level of school education. Where the performance in a picture battery is higher than in a word or numeric battery, this may indicate the existence of a potential for performance that is not fully expressed at school (Thorndike & Haagen, 1998).

In the TKS handbook, special emphasis is placed on responsible teacher training for administration. It is necessary to thoroughly master the instructions for administration and still carry out several so-called practice administrations, because administration is not only responsible, but also very demanding work. The test can be used in the school from the second grade of elementary school up to second grade of high school. Significant is the possibility of compiling a pupil’s profile, which expresses the level of structure of his / her abilities (strengths and weaknesses). The obtained results and information can then be used for the benefit of the pupil during the educational process.

The aim of this theoretically oriented paper is to briefly introduce with the importance of cognitive abilities and subsequently with the method of monitoring cognitive abilities in children and adolescents aged 7 to 16 years (Thorndike & Hagen, 1998). This test (TKS) can be used in the school environment by teachers, who have the opportunity to create an individual profile of individual pupil abilities according to the test results. Since research confirms the close correlation of general cognitive abilities and general learning abilities (Schmidt et al., 1986; Unger et al., 2009), it is possible to adapt the learning process to the specificities of each individual, which can help the teacher determine individual conditions educational process or to correct and select an educational content. When used correctly, TKS can become a useful tool for selecting and verifying effective methods of work at school.