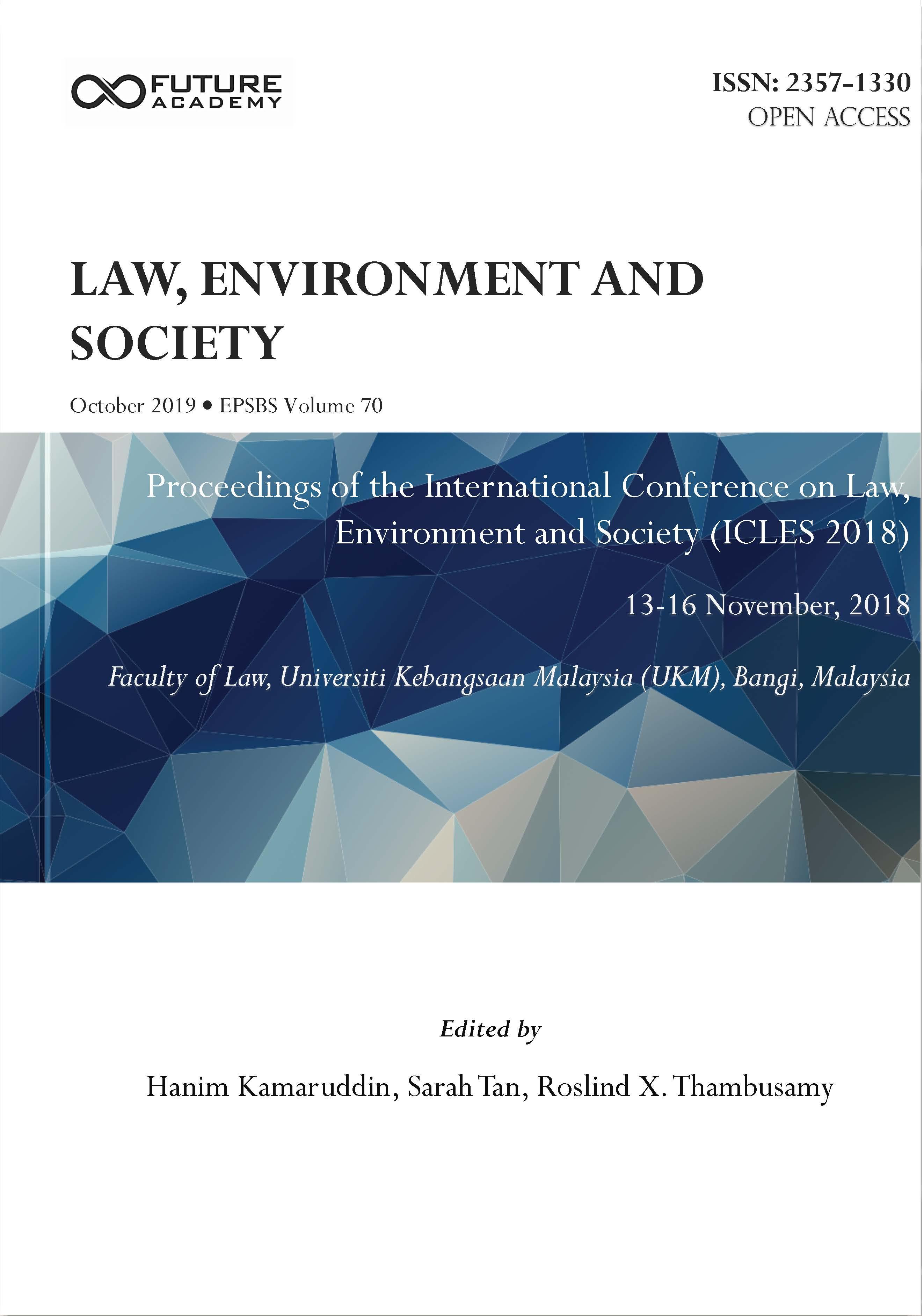 Safeguarding The Natural Environment: Laws On E-Waste Management In Malaysia

Mobile phone models are constantly being upgraded with increasingly attractive tools that are too tempting to resist for the majority of people who end up upgrading their phones each time a new model appears. This undoubtedly results in mobile phone waste. The question is what happens to this waste better known as e-waste? This paper looks at the legal implications in terms of the laws in Malaysia on the handling of e-waste. The objective is to identify the relevant provisions on e-waste disposal under the Environmental Quality Act 1974. The qualitative approach for legal research was used. The findings show that correct disposal methods of e-waste from mobile phones is still not being practised widely and the laws on household e-waste has yet to be strengthened.

There are many categories of waste and Malaysia is no exception. One example is waste found from a discarded mobile phone. For the purpose of this study, the e-waste discussed is drawn from the use of mobile phones.

Mobile phones are now a necessity and no longer a luxury. Almost everybody has a mobile phone and some even find it necessary to have more than one. Mobile phone models are constantly being upgraded with increasingly attractive tools making people buy a new model even though the phone they own is still in perfect condition. Thus, there will be an increase of mobile phone waste.

Mobile phone models are being upgraded all the time which tempt people to keep buying a new model every time one comes out. However, this will cause an increase of mobile phone waste. The question now is what happens to this waste better known as e-waste? Are the current Malaysian laws effective in curbing the e-waste and safeguard the natural environment?

The purpose of this study is to highlight the importance of having effective laws in place to control the disposal of e-waste specifically mobile phone waste. The increasing use of mobile phones has resulted in growing mobile phone e-waste. It is hoped that this short study will contribute to the research undertaken by many other researchers on regulations on e-waste to assist law makers to formulate more effective guidelines to treat domestic as well as industrial e-waste.

This is a legal research that analyses the laws on the handling of e-waste in Malaysia. The methodology involved looking at the primary and secondary sources of law. The objective is to identify the relevant provisions on e-waste disposal under the Environmental Quality Act 1974 (EQA) and other related laws.

Malaysia is a Party to the Basel Convention, thus, import and export of any hazardous wastes must follow the procedures of the Convention. E-wastes are listed as code A1180 and code A2010 under Annex VIII, List A of the Basel Convention on the Control of Transboundary Movements of Hazardous Wastes and their Disposal 1989.

The governing body in Malaysia for waste is the Ministry of Energy, Science, Technology, Environment & Climate Change. Any import or export of the wastes requires prior written approval from the Department of Environment (DOE) as mentioned under Section 34B (1)(b) & (c), of the Environmental Quality Act, 1974. The regulation assists all parties concerned in identifying and classifying used electrical and electronic equipment or its components. E-waste in Malaysia is also categorised according to the Basel Convention as follows.

E-waste can also be included as part of hazardous waste. The law also includes both household e-waste and industrial e-waste. In Malaysia e-waste is defined as waste from the assembly of electrical or electronic appliances that consist of components such as accumulators, mercury-switches, glass from cathode-ray tubes and other activated glass or polychlorinated biphenyl-capacitors, or contaminated with cadmium, mercury, lead, nickel, chromium, copper, lithium, silver, manganese or polychlorinated biphenyl.

This definition would also include the mobile phone and its components. Used electrical and electronic assemblies or otherwise commonly known as e-waste are categorized as scheduled wastes under the code SW 110, First Schedule, Environmental Quality (Scheduled Wastes) Regulations 2005.

Hazardous waste is waste that is dangerous or has potential to be harmful to health or the environment. Hazardous wastes include solids, sludges, liquids or gases. Some examples are discarded commercial products, like cleaning agents or pesticides, or the by-products of manufacturing processes. Hazardous waste is treated as scheduled waste in Malaysia.

Scheduled waste is defined as any waste falling within the categories of waste listed under the First Schedule of the Environmental Quality (Scheduled Wastes) Regulations 2005. The regulation contained provisions on the disposal, transportation, handling and processing of e-waste. Effective since 15th August 2005, it regulates scheduled waste.

Part IVA of the Environmental Quality Act 1974 is on the control of Scheduled waste. Section 34B of the Act is on the prohibition against placing, deposit, etc. of scheduled wastes. The section does not allow the placing or depositing of scheduled waste except at prescribed premises only, whether on land or into the Malaysian waters. This means that hazardous e-waste cannot be disposed of at any ordinary landfill or dumped indiscriminately anywhere in Malaysia.

Subsection 3 also contains the provision that it is an offence to do any act of receiving or sending, or transit of any scheduled wastes if the approval is obtained through falsification, misrepresentation or fraud.

Section 34B of the EQA 1974 also contains the penalty for non-compliance. Subsection 4 states that any person who contravenes this section shall be guilty of an offence and shall be liable to a fine not exceeding five hundred thousand ringgit (RM500, 000) or to imprisonment for a period not exceeding five years (5) or both.

The Department of Environment statistics section showed that there are still cases of non-compliance of section 34B of the EQA 1974. However, the cases shown are referred to as charges on scheduled waste offences only.

The Environmental Quality (Scheduled Wastes) Regulations 2005, under Regulation 3 is on the notification of the generation of scheduled wastes.

Regulation 4 is on the disposal of scheduled waste. The inclusion of e-waste in the 2005 regulation is to help control the management of these wastes generated in the country as well as to enable Malaysia to stop the import of used electrical and electronic equipment for short term usage.

However, GCUEEE has now been replaced by the Guidelines for the Transboundary Movement of Used Electrical and Electronic Equipment (UEEE) (2016) in Malaysia. UEEE is expected to assist in Environmental Sound Management (ESM) to ensure that Malaysia achieves environmental sustainability of e-waste management as part of Sustainable Development Goals (SDGs).

The guidelines also emphasizes the characteristics of e-waste. Used electrical and electronic equipment or components are defined as e-waste if it has any of the following criteria such as a defect that materially affects its functionality.

The characteristic of e-waste also includes the physical damage that impairs its functionality or safety, as defined in the specification. This means that electric and electronic items must have some form of defect for it to qualify as an e-waste.

Many people are not aware that the radiation from mobile phone usage could cause disturbances to the human brain. Medical testing also reveals a link to cancer due to exposure to radiation. The National Cancer Institute states (n.d.) that cell phones emit radiofrequency energy, which is a form of nonionizing electromagnetic radiation which can be absorbed by tissues closest to where the phone is held (Radzi, 2018). The amount of radiofrequency energy a mobile phone user is exposed to depends on the technology of the phone. It also depends on the distance between the phone’s antenna and the user and also the extent and type of usage. The user distance from cell phone towers while using the mobile phone is also significant.

It has been reported that some mobile phones and their accessories contain substances that are amongst the 10 most dangerous known to man. The substances include cadmium, rhodium, palladium, beryllium and lead solder. Apart from their immediate dangers to mobile phone users, it is also worrying that most of these substances might end up in a landfill site or thrown into the sea. Toxins associated with mobile phone waste include heavy metals and poisons, such as arsenic, lead, and mercury. Thus, the usage of mobile phones and the discarded mobile phones have an impact towards human health and the environment.

Proper recycling of e-waste is currently an option, left to the individual consumer’s levels of knowledge on the dangers of e-waste and civic-consciousness. However, as already mentioned, user awareness about the safe recycling of mobile phone waste is very low. In the absence of a sufficiently high degree of public awareness about the potential health hazards and environmental implications of waste mobile phones, it is impossible to design and implement programmes for its safe management and disposal.

E-waste, particularly derived from mobile phones, is also causing a similar problem in other countries. According to a news report released by the UN Environment Programme (UNEP) (2013) and the Secretariat of the Basel Convention, there is a rapid growth in the use of mobile phones. In 2004, 1.76 billion users were recorded which increased to more than 3 billion users in 2008. Gartner Inc. (2009) estimates that the Asia-Pacific has 114.4 million mobile phones sold in 2008. It is later estimated by the Statista Research Department that the total number of mobile phone users worldwide is on the increase and in 2019 it would reach 4.68 billion.

At present, it is difficult to assess the amount of household e-waste, specifically that derived from mobile phones because there is no specific record of the number of mobile phone users in Malaysia. Industrial e-waste is easier to manage as the number of industries is a matter of record. DOE and other related agencies have records of the number of registered industries.

E-waste is filled with a variety of toxic materials that affects all living things both flora and fauna, including human beings. When this e-waste is not handled properly, i.e. simply thrown out with the garbage, ultimately ending up in landfills, it means both human, animal and plant health are at great risk.

The current Malaysian law is not enough to curb illegal dumping of e-waste. When discussing on household e-waste, it is difficult to impose any fines because it is difficult to identify the polluter. Any person can just discard their mobile phone in the rubbish bin without being detected.