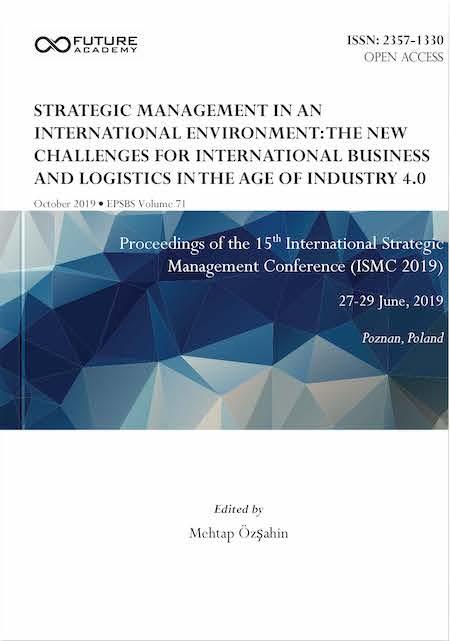 Organizational performance is one of the most important areas of research in strategic management field and researchers frequently face challenges in obtaining performance data. Often times, required performance data is not available publicly (Dess & Robinson, 1984). As a result, using perceptual measures of performance in the absence of objective measures has become common practice. When doing so, typically top level and/or mid-level managers are the main constituents and employees from other levels are not included in the studies. Hasson, Tafvelin, and von Thiele Schwarz (2013) argued that it was important to include perceptions of employees other than the top-level managers or human resource department ratings on organizational learning research. It was stated that employees from different professional groups could offer valuable information on organizational learning (Hasson et al., 2013). In similar vein, inclusion of employees’ perception other than the top-level managers on organizational performance could provide valuable insight. We argue that it may lead to biased results to include only managers as constituents in measuring organizational performance and other professionals from different levels of the organization should be included in order to obtain a more balanced and accurate measure.

The study aims to provide empirical support for the employment of perceptual measures and inclusion of different types of professional groups, not only managers for the measurement of organizational performance (OP) and proposes using a joint performance metric which comprises of objective measures as well as subjective to have a more balanced performance measurement framework.

Moullin (2004) on the other hand states that “delivering excellent health services requires a high standard of performance on a wide range of factors such as clinical care, patient satisfaction, short waiting times, cost control and learning from best practice elsewhere. Hence, he emphasizes that all areas must be considered when measuring performance and achieving a balance between subjective and objective measures” is crucial.

One-way ANOVA Analysis (Analysis of Variance) was used to analyze the data. To test the reliability and the validity of the survey instrument exploratory factor analysis (EFA) was used. IBM SPSS Statistics Version 25 was used for data analysis.

The study employs two different methods of data collection. The data consisting of perceptual measures of hospital performance was collected by a survey instrument. The objective measures of the hospital performance were obtained from the hospitals’ annual performance reports covering the years 2015 and 2016. The study was carried out in 9 public hospitals operating in Istanbul metropolitan area. The survey data was collected over a period of 5 months between October 2016-February 2017. In order to get a more comprehensive and balanced view, all of the hospital departments were included in the study and the participants were asked to provide their opinions on hospital performance. However, considering the fact that hospital performance is a concept not all employees may be sufficiently knowledgeable about, only employees who are in charge of their particular departments were selected as participants. In Turkish public hospitals most departments have an employee in charge—responsible (chief) personnel. The study’s sample consists of the 414 chief personnel from the population of 917 chief personnel in these 9 hospitals. During the course of the research a total 623 surveys were distributed. 431 surveys were returned resulting in a response rate of 69%. After the elimination of 17 surveys due to missing and unengaged responses and improper respondents the final sample size consisted of 414 chief personnel with a response rate of 66%. The names of the hospitals were kept confidential due to privacy concerns.

Perceptual data of hospital performance was obtained using a survey instrument. The survey instrument was developed following the performance assessment tool used in Turkish public hospitals. The survey questionnaire was developed based on the dimensions of the public hospital measurement tool. The participants (414 chief employees) were asked to provide their perceptions regarding the performance of ‘health care services’, ‘financial services’, ‘administrative services’, ‘teaching and training’ and ‘employee satisfaction’, ‘patient satisfaction’ and ‘overall performance’. The survey questionnaire consisted of 17 questions of which 10 was about the demographic characteristics of the participants and 7 was about their perceptions on the performance of their respective hospitals. A 7-point Likert-type scale was used. The range of the scale was 1= ‘Very Poor’, 2= ‘Poor’, 3= ‘Somewhat Poor’, 4= ‘Neither good or poor’, 5= ‘Somewhat Good’, 6= ‘Good’, 7= ‘Very Good’ with an option of ‘No Opinion’ at the end.

In the EFA the factor structure is determined based on the correlations among the variables in the data set. Principal components method of extraction and varimax rotation was performed on the survey items. The Kaiser-Meyer-Olkin measure of sampling adequacy was 0.907 indicating that the strength of relationship among the variables was high. Bartlett’s Test of Sphericity is another measure of sampling adequacy and tests the overall significance of the correlations among the items in the construct. The Bartlett’s test of sphericity was significant (chi-square= 1661.170, p<0.001) confirming sampling adequacy for the factor analysis. The factors loaded in a single factor and the loadings were above 0.5. The factor explained 63.28% of the total variance. Reliability analysis was performed to ensure consistency among multiple measurements of the variables. Cronbach’s alpha score of 0.899 was obtained indicating sufficient construct reliability. Commonly, values above 0.7 are considered satisfactory (Nunnally & Bernstein, 1994). The results of the EFA are shown in Table .

414 participants were divided into five groups based on their professions: 1) physicians, 2) nurses and midwives, 3) clinical support staff (laboratory personnel, pharmacists, physiotherapists etc.), 4) managers, and 5) administrative support staff. The participating hospitals were also split into three groups depending whether they are 1) Specialty hospitals 3) Teaching and research hospitals or 3) State hospitals.

A One-way analysis of Variance (ANOVA) was used to investigate three questions:

One-way ANOVA for ‘perceptual performance’ by type of profession

Levene’s Test was performed and the results of the analysis revealed that the assumption of homogeneity of variance was not met (F statistic=6.787, p<0.001). The sample size of each of the professional group is unequal. Welch’s Test is considered appropriate when the sample size is unequal and the homogeneity of variance assumption is not met. Welch’s F statistic was significant at 0.05 probability level (Welch’s F=15.412, p<0.001) implying that perceptual performance differed significantly by professional group. In order to determine which pairs of the five professional groups’ means differed significantly Games-Howell post hoc test was performed. The results of the post hoc test are shown in Table .

One-way ANOVA for ‘perceptual performance’ by type of hospital

One-way ANOVA for ‘joint performance’ by type of hospital

Because of unequal sample size and failing to meet the assumption of homogeneity of variance (F statistic=5.439, p=0.005) Welch’s Test was conducted. Welch’s F statistic was significant (Welch’s F statistic=22.929, p<0.001) indicating that there was a significant difference in ‘joint performance’ scores between type of hospitals. Games-Howell post hoc test was conducted to investigate which hospital types differed significantly. The results of the post hoc test revealed that there was a significant difference between all of the hospital types in joint performance scores. The comparisons are displayed in Table . The specialty hospitals had the highest mean for joint performance (M=4.68, SD=0.783), followed by state hospitals (M=4.32, SD=0.903) and teaching and research hospitals had the least mean (M=4.03, SD=0.725).

Managers typically have a general knowledge of the operations which is undoubtedly crucial. However, it is possible that a general view can sometimes cause some important details to be missed. Clinicians and other medical staff may not have accurate information on financial performance of the hospital while they are expected to have a more accurate perception of the health services performance. So, it may be wise to obtain financial indicators from the managers while for the procurement of other performance data, other professional groups could be utilized in an effort to obtain more balanced and comprehensive performance data. The survey instrument used in this study to measure perceptual organizational performance was developed based on the general framework of the objective organizational assessment tool utilized by the hospitals in the study in order get a general perceptual view of performance. Future studies may consider a more detailed framework to get a more robust measurement metric. Hence, when it is not possible to obtain objective performance measures perceptual measures could be used instead. Moreover, when possible, conducting the research using both objective and perceptual measures should be preferred in order to obtain a more comprehensive and accurate view of organizational performance.