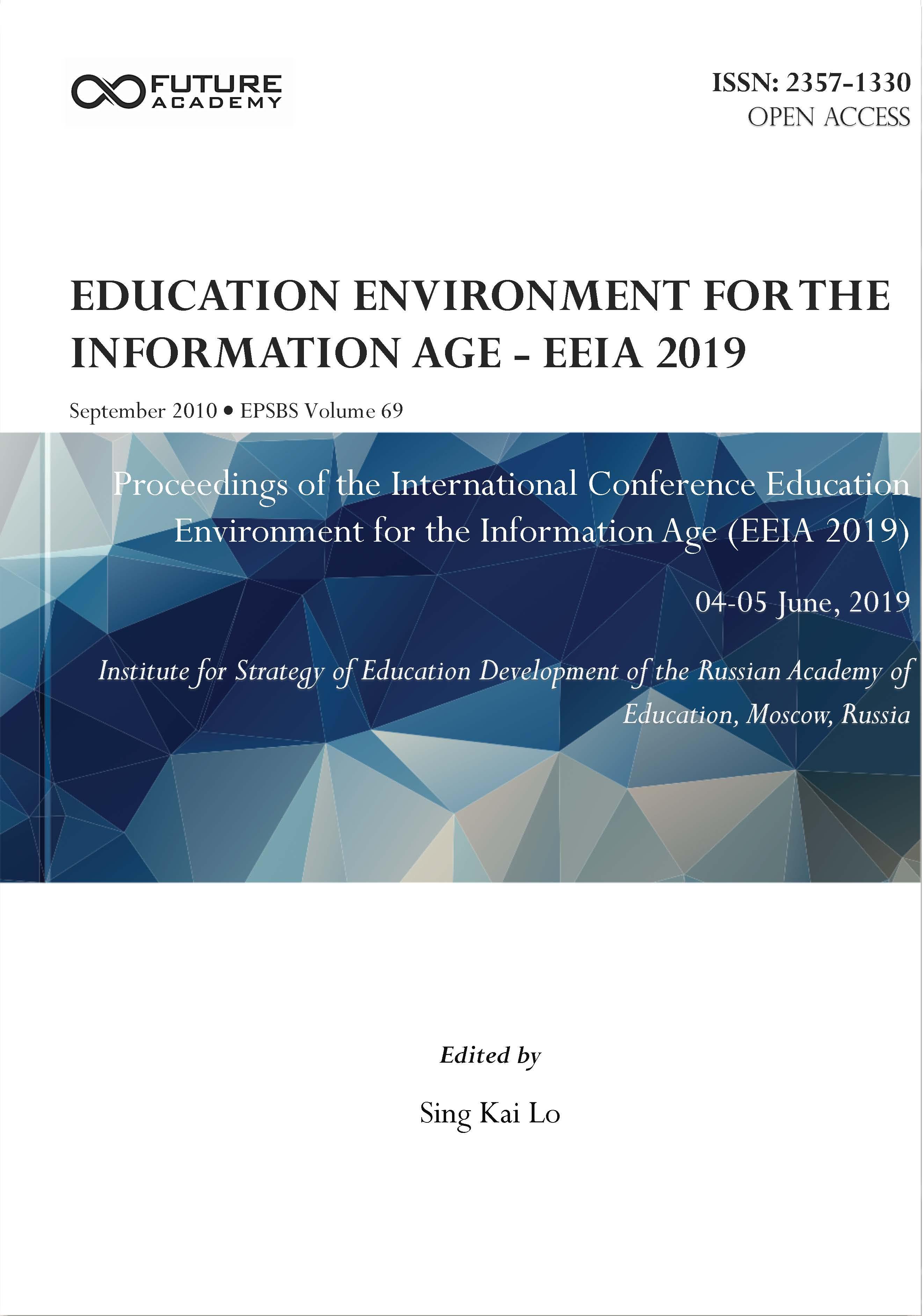 The problem of interaction between Man and Nature has always been one of the most important problems in modern psychological and pedagogical research. Studying the relations between subjects and environment is in demand because of constant and dynamic changes in the environment itself. New features and other characteristics that were yet to exist decades ago characterize modern reality.

According to the empirical research 75% of the students faced difficulties in adapting to higher education institution’s virtual educational environment. One of the main difficulties for students is “self-organization and time management”. The major part of the respondents (45%) expects help from the teaching staff.

In this regard, the problem of human tolerance in the changing world, maintaining individuality in the process of interaction with different social spheres (as well as virtual environment) is still understudied. This demonstrates the apparent interest to possibilities in projecting virtual educational environment for personal and social identity formation.

According to the analysis of research by Turkle (1995), Taifel (1982) and Erikson (Erikson & Coles, 2001), dedicated to the problems of identity formation identity is an individual ability to assimilate personal and social experience to support self-integrity and personality in the ever-changing outer world.

According to the research by Maslow (1973), identity satisfies one of the basic needs of a human being – the need for belongingness and affection. This helps to view identity as individual mental (values, norms, ideals) inclusion to one or another social group.

However, identity is not personality’s sustainable feature. This is due to the fact that a person exists only in the process of development and constant self-change. At the same time a person changes under the influence of the changing world and the world due to being created considerably by people changes under the influence of a person. Hence, identity is socially controlled. Creating a special environment is one of the ways to construct identity.

Prioritizing student youth as an object of personal online identity formation research is dictated by a number of circumstances. First of all, it is the social group to react on changes in social norms, demands, rules, etc. more dynamically. Therefore, the process of the online identity formation actively flows in this environment. Secondly, young students are the very vehicle to critically interpret and dynamically update outdated social experience. Therefore, there is a need to fill substantially the virtual educational environment content with new meanings, values, etc. An important factor in choosing this group as an object of study was the fact that in modern conditions of globalization the number of contacts between representatives of different cultures is constantly increasing. It should be noted that according to researchers young students a prone to identity crisis which is a turning point in their development.

Computer technologies are a special means of organizing these contacts. The relation value and meaning guidelines to the social environment and to the real life (including virtual) is the most important problem of the modern period and the key issue in the theory and practice of education.

In order to reach the aim stated in the article such methods like descriptive, contextual analysis of terms, synthesis and generalization are used.

Our analysis of studies devoted to the problem of the individual online identity formation showed that there is no unambiguous understanding of the phenomenon. The problem of studying online and virtual identity is interdisciplinary in nature and is reflected in the studies of foreign and native philosophers, psychologists, sociologists and cultural experts. In our country the active study of “virtual identity” was reflected in various works; we can find the study about online identity performed by foreign experts (Wilson, Gosling, & Graham, 2012; Turkle, 1995).

However, such a diversity of approaches to the study of the phenomenon of identity leads to uncertainty, and the concepts of identification often contradict each other.

Most fully, in our opinion, the phenomenon of online identity discloses in the studies of Flenina (2015) as “a set of hypertext components of an individual’s network image forming within the online environment for the purpose of self-presentation and reflecting real aspects of personality, as a project of personality , creatively disclosed within the interface capabilities of the used online platform” (p. 78).

The virtualization processes of modern society lead to a trend of blurring the boundaries of both individual and social identities.

Uhanov (2009) defines the ongoing identity transformations in network communications: 1) the subject accepts the rules of a particular network community; 2) the communication process is characterized by multiple identity strategies; 3) an unstable, gaming, situational identity occurs on the network.

Online identity is defined as multicomponent entity, representing a set of components of a person’s network image that reflect the real aspects of a person and ensure the integrity and identity of the person in the process of Internet interaction.

The problem of identifying the features and characteristics of the educational environment is associated with the study of issues of interconnection and inter-influence of the world and man.

Researchers (Alisov & Listvina, 2008; Gam, 2016; Uhanov, 2009; Flenina, 2015) are united in one thing: a virtual educational environment can influence the development of a network identity of a person.

Possibilities of Internet technologies allow you to receive information quickly, ensure the transfer of knowledge, organize independent work of students, project activities, etc. The virtual educational environment allows more to ensure the subject-subject interaction of the teacher and the student, to develop self-reliance, self-confidence, increase self-esteem. In the presence of a certain autonomy of the individual in education, the use of a virtual educational environment ensures the development of initiative, responsibility, creative self-activity, cognitive activity, freedom of choice, and motivation.

A pilot survey among students from 18 to 24 years old conducted as part of the study showed that 100% of respondents use Internet resources. Preferences of virtual communication than real give 42%, explaining that by speed (88%), convenience (98%), lack of spatial restrictions (46%), anonymity (18%), the possibility of expanding the circle of contacts (16%), which contributes to self-affirmation online.

Of course, a number of restrictions are removed in the virtual space: different social status, geographical boundaries, organization of life, etc. Along with expanding the range of opportunities and social circle through the virtual space, respondents note that the depth of relationships is lost. In this regard, many Internet users are beginning to appreciate more people nearby.

The virtual educational environment can contribute to the development of tolerance, flexibility in communication, inadequacy in relation to the behavior of others, broadening the outlook, forms of self-presentation. We consider this fact as a consequence of the formation of value benchmarks and the determination of possibilities for constructing the content of a virtual educational environment.

To design a virtual educational environment, the following factors should be considered:

• formation of an effective control system;

• the composition of the network community.

Analyzing research related to the content of education (Gnatyshina et al., 2018; Waghachavare, Dhumale, Kadam, & Gore, 2015; Wilson et al., 2012) we note that researchers identify two approaches to changing the way people think and their way of life using the possibilities of the environment: a) through the dissemination of knowledge and information; b) through the promotion of values and social norms.

Of course, the axiological component seems to be the most significant, since the norms and values determine benchmarks in the individual and public consciousness, regulate the actions and behavior of people in society and a group. It is values that are the key to understanding culture, and therefore, can be explored both at the cultural level of social groups and at the level of individual differences. According to the results of numerous studies (Taifel, 1982; Turkle, 2012; Walters & Haahr, 2005; Zhang, Cui, Zhou, Cai, & Liu, 2018), the importance of values in the development of a person is much more important than environmental knowledge.

Note that values are the most significant, important for a man; measure of the significance of motives. Values are formed under the influence of the immediate environment of the individual and significant for his life social persons and circumstances. The hierarchy of personal values regulates the activity of a person, the direction of his activity.

In the theory of values Schwartz (2005) identified ten core values in accordance with the motivational type. In accordance with this theory, values are universal for all cultures, since they have the same motivational grounds: the needs of people as biological organisms; the need to establish and coordinate social interactions; needs for the survival and well-being of a social group.

The most significant value, according to research by Schwartz (2005) is universalism, which is expressed in understanding, tolerance, protecting the well-being of all people and nature, the need for survival of individuals and groups. In the student environment, among the significant values (personality traits) are called: creative activity, dedication and leadership (competitiveness). Despite the fact that young people do not emit a direct relationship between a successful career and education, the value of education in the eyes of young people does not decrease.

According to the results of the study “Cultural dynamics of the Russian society and the prospects for the modernization of Russia” (No. 11-03-00561a with the support of the RHNF), young people feel that they are part of the inhabitants of their country and region, which indicates the priority of local (above global) identity. At the same time, 78% of respondents believe that it is important to stand out among others, to be a bright personality. In general, young people are more focused on autonomy, initiative and tolerance for change.

The orientation of young people on family creation, personal freedom and self-expression turned out to be the most significant compared to the orientation on the material side of life.

Thus, value-semantic orientations are considered as important signs of the educational space, in which its pedagogical potential is revealed (Alisov & Listvina, 2008; Gnatyshina et al., 2018; Tang & Dai, 2018).

When designing a virtual educational environment in addition to the traditional principles of education (science, humanism, culture, etc.), we need to consider a number of principles:

variability - provides functional flexibility, multi-aspect completeness of the saturation of the educational environment;

social anticipation - the use of prognostic ideas and the need to accumulate both professional and “human capital”;

creative orientation - ensuring interest in the nature of creativity, the development of creative abilities of the individual.

Thus, the content of the virtual educational environment with a value-semantic context should be based on the search for an integrated methodology based on a consistent combination of traditional and innovative directions in research, the integration of professional and general cultural content.

A theoretical analysis of domestic and foreign studies in the field of network identity formation can be concluded:

The problem of studying online identity is one of the central ones, since in modern conditions the Internet, as a new communicative environment, plays an increasingly prominent role in interpersonal interaction, and the Internet communities are becoming new channels of social activity and gain influence on real world events, processes related with changes in the identity structures of the individual in the modern information society.

Online identity is a component of a person’s self-awareness, associated with the activity of the subject and ensures the integrity and identity of the person in the process of interaction between the Internet environment, expanding its possibilities for self-expression, and maximizing the potential of the individual.

Designing a virtual educational environment, in addition to the traditional principles of education, it is necessary to take into account a number of specific principles: variability; social lead; creative orientation.

It seems necessary to further study the value-semantic content of the virtual educational environment as a factor in the formation of online identity.