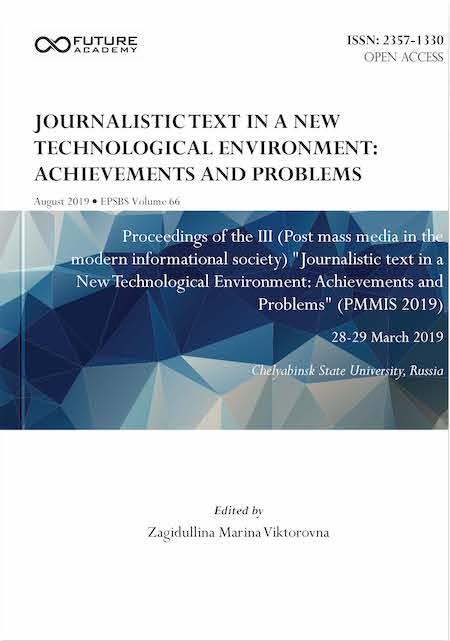 The article provides examples of a serious violation of the traditional journalism creative standards, peculiar to online journalism presented in new media. The author comes to the conclusion that the violations, despite its wide use, are not determined by the nature of new media, but are temporary in nature, related to the peculiarities of the initial stage of Internet expansion. The dramatic nature of this stage gave rise to fears in the traditional media editorial offices, which are fueled by fierce competition with the new means of communication and prompted journalists to take actions that do not take into account generally accepted rules. Professional journalists are followed by numerous Internet users, who become, thanks to its interactivity, content producers. Degraded media ethics has become a characteristic feature of the modern world of communications. The growing information society will return to the standards of traditional journalism, which provide it with a place among public goods. He finds examples confirming this, in particular, the widespread media education of young people. Mastering the standards of quality journalism, young people will contribute to their preservation and dissemination in society. They will be promoted by the competition, which puts forward the leading positions of communicators acting in accordance with the norms of media ethics. Effective practice over time can become a reference for the whole society. This forecast of the author of the article is based on the laws of a market society, which assumes the high quality of all phenomena of social life.

New technologies are seriously transforming the world of media and journalism (Vartanova, 2013). Most scholars and journalists are positive about the changes since they involve a larger part of society in the communication process, open public space, due to increased interactivity, awaken public initiative and include in the discussion of topical social problems.

In today's digital world, journalism is greatly enriched. An immeasurably greater number of opinions and facts are available to journalism, it is equipped with new tools, the range of journalistic competencies is expanding, its creative possibilities are growing (Tulisova, 2017). The question is how to skillfully take advantage of this wealth.

At the same time, the digital world poses threats to the traditional quality standards of journalism, which previously guaranteed it a place among the recognized public goods (Zolotukhin, 2015). Each case requires careful consideration and finding solutions that contribute to the preservation of the most important values of journalism as an institution.

Digital technologies, making tools for the production and dissemination of information publicly available, led to an explosive growth of content in a public space. Its volume exceeds the capacity of human attention so much that it threatens the world with “informational savagery” (Castells, Parks, & Khaak, 2016).

The most powerful sources of information flow are new media websites, social networks, blogs, which are far ahead of the traditional media in terms of demand (printed media, television, radio). It is their products, called network journalism, that sometimes demonstrate incompatibility with the most important values of quality journalism. And this is due not so much to the nature of the new media, but to the increasing competition in the media market, the desire for exclusivity, and the deadlines.

First of all, it is about the most important standard of quality journalism that is the authenticity of information disseminated. Researchers who study web journalism point out that it interprets the notion of “information source” in a new way: they “can become not a physical communicator, but its network view as a microblog on Twitter or a Facebook account” (Gatov, 2016, p. 238). Record in the microblogging is not always verifiable, which means that it may turn out to be untrue and become the basis of fake material. It may look convincing outwardly, especially if the journalist provides a comment from a reputable expert, but not be credible. A direct consequence of such a publication is the loss of trust and loyalty of the audience.

Traditional journalism believes that the best source of information for a journalist is real life, hand-made material. This ensures its authenticity. Lozovsky (2011, p. 170) notes that, besides everything, this is “perhaps the most important way to counter various kinds of manipulations”.

Deviation from this rule in network journalism is dictated by the desire to increase the efficiency of communications, to outrun competitors (Kolesnichenko, 2017). From the point of view of business, it seems natural, and the reputation of journalism causes obvious damage.

Another deviation from traditional standards with online journalism is objectivity, which is sometimes valued less than transparency and independence. Specialists (Castells et al., 2016) consider a neutral (objective) narrative to be less attractive to the reader than bright materials containing a clear position or an interesting point of view. It is important to ensure the transparency of sources and content. The reader should see and understand that the material is not based on the opinion of the author and not on ideology.

This assumption is also dictated by business. It arose as a first reaction of the print press to the Internet expansion and initially only extended to it. Yielding the network point after point, the print press has sacrificed objectivity in favor of brighter one-sided materials that could more reliably hold the attention of the audience. And network journalism has taken this approach as the norm. At the same time, the transparency of sources and content, justifying the author in the eyes of readers, does not compensate the audience for the losses associated with the loss of various points of view and the balanced arguments inherent in genuine objectivity.

In the digital world, an important role is assigned to a journalist. It is to integrate meaningful information and to extract the meanings necessary for society (Oleshko, 2018). If one does this, relying on flawed creative technologies, the results of the work will multiply the effect of “informational savagery” of the audience.

The new information environment creates not only new positive solutions, but, unfortunately, brings new mistakes. One of them is represented by the story of the famous German journalist Klaas Relotius. It is not determined by any traits inherent in it, but rather in the nature of the injury they inflicted.

One of the formats of network journalism is a multimedia story (storytelling). It is a combination of a text, photos, video clips, audio, graphics and interactive elements. The key in this case is the story. The basis of storytelling should be an original event that has a dramatic plot, with an unexpected outcome. Here personification is especially appreciated when this event reflects a particular story. Such storytelling is especially attractive for the reader, because it can cause empathy, almost inevitably generating loyalty to the main character.

Dramatic story has always been the most valuable media content. New media, equipping it with bright and interactive tools, made storytelling extremely popular (Chumakova & Fedotova, 2018; Simakova & Enbaeva, 2019; Simakova, Enbaeva, & Isakova, 2019). Fascinated by a powerful modern trend, Klaas Relotius has written stories for Der Spiegel and its online versions. For eight years, he has published nearly 60 materials, many of which have been awarded prestigiously. As it turned out, several materials, including those that received professional awards, in some part did not correspond to reality, were far-fetched.

The purpose of this article we formulate as follows: to show the role of the editorial board in working with the authors in the era of new media.

In the study we implement a set of research methods: synthesis, description, case study.

I must say that, telling the readers about the case of Klaas Reloitus, has demonstrated the utmost sincerity and openness. The magazine set how it was possible to expose it, published an editorial column with questions to the editorial board, outlined the technology for checking journalistic materials, laid out all Klaas Reloitus’ publications in open access suggesting that readers check them out.

The editors found that, not having communicated with the characters enough, Klaas Relotius supplemented the information received from them with details from the corresponding newspapers, videos, blogs and social networks. The Internet has helped him to create hoaxes (Puchkov & Ilchenko, 2019). It would be more difficult without the Internet as reality does not always fit into the framework of an exciting storytelling.

A similar incident could occur in any other media. The likelihood of this increase in the era of new media, when “the rules of the game become uncertain for the audiences, web journalists and those affected by the message” (McQueil, 2013, p. 280).

We emphasize once again: the marked deviations from the standards of quality journalism and the norms of traditional media ethics are not determined by the nature of the Internet and new media. Rather, they are the result of a simplification, which is typical for people under a complex, unfamiliar environment.

Let us recall the first impressions from the acquaintance of journalists with the Internet. It took place in the conditions of the fierce competition of the latter with the traditional media. Despite their centuries-old power, day after day they ceded their position to an aggressive newcomer. Employees of news media have started to master the tools of online journalism. They are certainly familiar with the norms and rules governing the activities of traditional media journalists, but they considered it unwise to execute them under new conditions, in the face of a serious threat, in an unfamiliar environment.

Most of the representatives of the new media, the number of which is immeasurably larger, are not familiar with these norms or are not fundamental. Accordingly, they do not bother to fulfill them. For them the result is important, which is expressed in terms of traffic, likes and advertising. Therefore, gradually becoming the norm of deviation from the usual norms.

Will they become the basic rules of the new journalism? If we keep in mind the rather remote perspective of the information society, then the probability of this is low. The Internet is still quite new, and many new media are generally in “their teens”. As they further develop, they will come to the question of developing new or mastering the existing standards that guarantee a market society that highly values quality journalism.

Most likely, traditional journalistic standards will be restored and remain valid. Shaikhitdinova (2004) in her study concludes that the basis of the morality of the information society will be the existing media ethics, it will be guided not only by professional journalists, but also by all communicators. The impressive development of media education, which, for example, is undertaken in the Chelyabinsk Region, covers almost all secondary schools. The fact is rather convincing. Young people, comprehending the world of media, master the laws by which it lives.

This is not the only channel for the dissemination in society of ideas about the norms governing the activities of the institution of journalism. The engine of this process will again be a competition, this time with a positive influence. The readership inevitably seeks to those communication channels that provide it with the delivery of reliable, objective and useful information (Ivanitsky, 2010). These channels will be the most successful and will serve as a guide for all others. Over time, in a more mature information society, when the Internet and new media have finally settled down and become everyday routine tools, these norms will become universal.