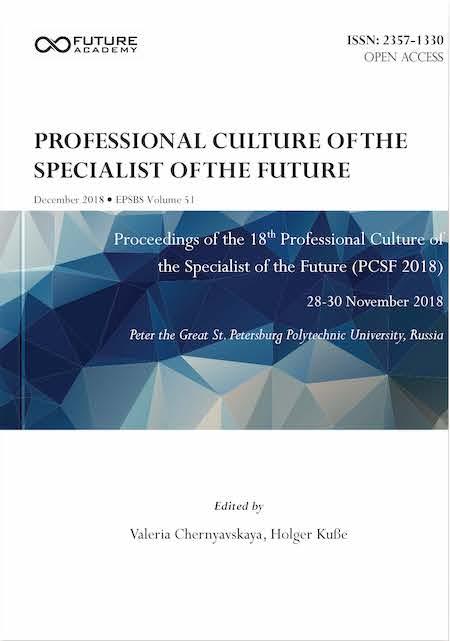 The article considers the question of the formation of political values ​​of Peter the Great SPbPU students in the process of their political socialization. The University creates the most favorable conditions for the formation of students’ socio-political orientations, which are the basis of political interest and activity. First, all students of the university study the humanities. This not only increases the general level of education of students, but also expands their view of the world. Secondly, the assimilation of humanitarian knowledge takes place according to the program and under the guidance of qualified specialists. Students get acquainted with socio-political terminology, modern concepts; discuss acute issues of modern society. The systematization of new knowledge forms "political awareness" and "political competence" among students, which underlie "political activity". Political awareness presupposes a qualitative and critical selection of the information received from various sources of information. Based on the information received and processed, the young man creates own system of political preferences and orientations. Political competence is related to the students’ knowledge and understanding of their political rights and duties, the ability to assess socio-political events in the country and in the world, formulate and justify their opinion and attitude to political facts and leaders. Political activity is connected with the young man's conscious desire to realize own needs and aspirations in the sphere of politics. Thus, the acquired knowledge in the process of assimilation turns into internal beliefs and political values ​​that are realized in practical activities.

The study of the formation of political orientations and values of contemporary Russian youth and the stages of political socialization of students at the university is interesting both in the theoretical and in the practical sense.

After the collapse of the USSR in politics, as in other spheres of Russian public life, a period of dramatic changes began. The traditional mechanism of social control, which existed in the Soviet Union, lost its power and influence. Previously existing institutions of political socialization lost their role. Over the past decades, the main institutions of power, the political regime and state ideology have been completely renewed. Practical reformatting also affected the system of political values ​​of citizens, especially the younger generation. Russian youth in the period of the 90s - 2000s, occupied a relatively marginal position in society. As a result of the weakening of the connection with the social experience of the previous generation, the youth began to independently build a system of political values ​​and develop new forms of political activities. When we study the process of political socialization of young people, it is necessary to pay attention to the fundamental difference highlighted by Inglehart (1997) between growing up, when it is accompanied by a consciousness of insecurity of survival, and growing up, which is accompanied by a feeling that survival can be taken for granted.

The theory of the positive impact of higher education on the socio-political orientations and values of students was developed by Almond and Verba (1965). The authors noted that higher education raises the overall cultural level of human development, which allows us to better navigate in the contemporary socio-political situation and make informed decisions.

Democratic values are universal values whose tasks are to define and regulate the process of social interaction. However, despite their universal nature, the significance of these ideas varies from society to society, depending on the level of socio-political development. Despite the large number of research in this area, the problem remains insufficiently studied (Fried, 1971; Klukhohn, 1962; Rokeach, 1973; Shipunova, 2014; Kashirsky, 2014; Dobrinina, 2018; Evseeva, Bashkarev, Pozdeeva, & Tarakanova, 2017; Pozdeeva, Trostinskaya, Evseeva, & Ivanova, 2017; Skorniakova & Safonova, 2017).

Political perception and political values of modern society among the youth of Russia are in the process of becoming. It is already clear that mechanism and channels of political socialization of young people in the digital age have changed. Sufficient level of education and wide opportunities access to a variety of information received on the Internet and in social networks, allow us to talk about increasing political awareness and interest in the political life of the country from students. Acquaintance with different opinions of political leaders, experts, journalists, bloggers and ordinary people about the situation in the country and abroad allows a young person to orient more quickly in the sphere of policy and form personal beliefs and values. Political awareness leads to political competence. Students are already not just follow the political news and events, but also participate in various group discussions on the Internet and social networks, expressing their personal opinion and giving their arguments. Transition to the third stage of political socialization - political activity to begins by participating in such virtual groups. Rallies and protest marches, organized by informal youth leaders of opinions, attracted active students through the use of modern computer technology.

The study of key problems modern Russian society, which students perceive as most important for their future, allows us to determine their basic political beliefs and values. In addition, the level analysis students 'concern with "painful points" in the life of modern Russia reflects the degree of students' readiness for active protest political activity. Understanding of new tendencies in the political socialization of students will allow developing of state policy with aimed at the constructive involvement of youth and students in democratic processes of political development of the Russian Federation.

The study addressed the following research question: Within the current era, what determinative change variables in the political values ​​of university students are likely to affect their political activity?

This question was researched in order to achieve two major purposes:

In order to achieve these ends, this study utilized a mixed methods approach within a sequential explanatory research design. The first stage of data analysis began with quantitative data that was extracted from survey of students, which were conducted by the Peter the Great University Sociological Lab (Razinkina, 2017). The lab provided the researcher with non-longitudinal, depersonalized datasets in electronic form, and the survey included responses from 1500 students of all institutes of SPbSTU (the total population is 15,000 students, sampling error - 2.4%). Analysis of this quantitative data resulted in the identification of three initial variables. These included: (1) political awareness of students; (2) their political competence; (3) student political activity.

During the second, qualitative phase of data analysis the researcher studied the variables illuminated by the quantitative data analysis. This was accomplished by conducing in-depth interviews with ten students of different educational programs of Peter the Great SPbSTU, coming to the University from geographically diverse regions of Russia.

The study showed that the main sources of information of socio-political nature for students are: social networks (58%), electronic media (51%), electronic news portals (38%) and blogs (26%). Among traditional media only television (37%) is popular. In particular, in the second half of the XX-th century television already acts as an effective channel for mass socio-political influence translation (McLuhan, 1967). The most unpopular sources of reception topical information became radio (10%) and printed press (9%). According to respondents, the most effective channels communication between society and power are social networks and blogs (49%), followed by traditional media (television, radio, print media) (37%) and feedback on the websites of different level authorities, such as the president, government, parliament, the governor and etc. (36%). To participate in the rallies and pickets indicated 27% of respondents, in elections (25%) and political petitions writing on the Internet (23%).

The negative attitude to the elections in Russia was expressed by 49% respondents. They believe that elections in Russia are not fair, nothing is deciding and everything is predetermined in advance. 15% of respondents believe that elections are an effective mechanism for the political elites and passing honestly. 33% of respondents found it difficult to answer. On an open question, what tasks cannot be solved with the help of elections in modern Russia, the respondents suggested the following options: succession of power; solution of social and economic problems; eradication of corruption; realization of the idea of ​​social justice; change of the Russian mentality; fulfillment by politicians of their pre-election promises; the president does not decide any tasks. According students opinions, the most pressing problem in Russia is corruption. At the same time: 68% of respondents do not approve or participate in corruption interaction; 16% had negative experience of participation and do not approve this practice; 8% of respondents answered that the problem of corruption is indifferent, and 5% of the students surveyed are corruption and believe that with its help you can solve problems faster. Among the other key issues that students are concerned about, were named: the poor quality of the judiciary and the inequality of people before the law (63%); disinterested bureaucracy in radical changes (50%); a negative effect due to lack of media, independent of the authorities (48%); closed, unaccountable political elite (42%); the struggle of various groups of power (35%).

On the question whether a person considers himself politically active, the majority (67%) answered negatively. Among those who are interested in politics, 13% of respondents named themselves as politically active citizens. 21% of respondents called protest political movement in the form of a demonstration or protest actions an effective means influence on politics in the country. However, most students (61%) think that such activity is ineffective and is not influence on the process of adopting political solutions. Despite the recognition by most students of inefficiency public political events, 50% of respondents recognized that the holding of mass protests in St. Petersburg is quite possible. 31% of respondents recognized this type of activity is unlikely, and 17% found it difficult to answer this question. 70% of the audience oriented to socio-political reforms in Russia. In this case, 44% of participants supportive the evolutionary path of the country reform, 26% said that it is possible to carry out a radical restructuring of the entire system and 25% of respondents found it difficult to answer.

The study allows us to draw the following conclusions:

The majority of respondents showed that they competent in the analysis of the Russian socio-political situation, highlighting the key problems of the country. Confident expression of students’ opinion testifies not only to their awareness, but also to the formed political orientations and values.

Despite the high level of political awareness, the ability to navigate the current political situation, the expressing their own views on the country key problems, the political activity of respondents is low. The majority prefers to be observers and only a small number of respondents are ready to participate in active protest activities.

The study showed that the basic political values of respondents are democratic values, such as: social justice, expressed in the equality of all people before the law and in the income distribution; freedom of information and independence of the media; reduction of social power distance; changeability of political elites. The perception of officials as a social group as a possible obstacle to the successful development of the country shows that students are focused on the effectiveness of public authorities. The fact that students have a negative attitude to corruption is indicative. This shows that honesty in social relations is important for respondents, since corruption is not only an economic category, but also a moral one. Corruption destroys human relations in society, making only money and communication the basis of society.