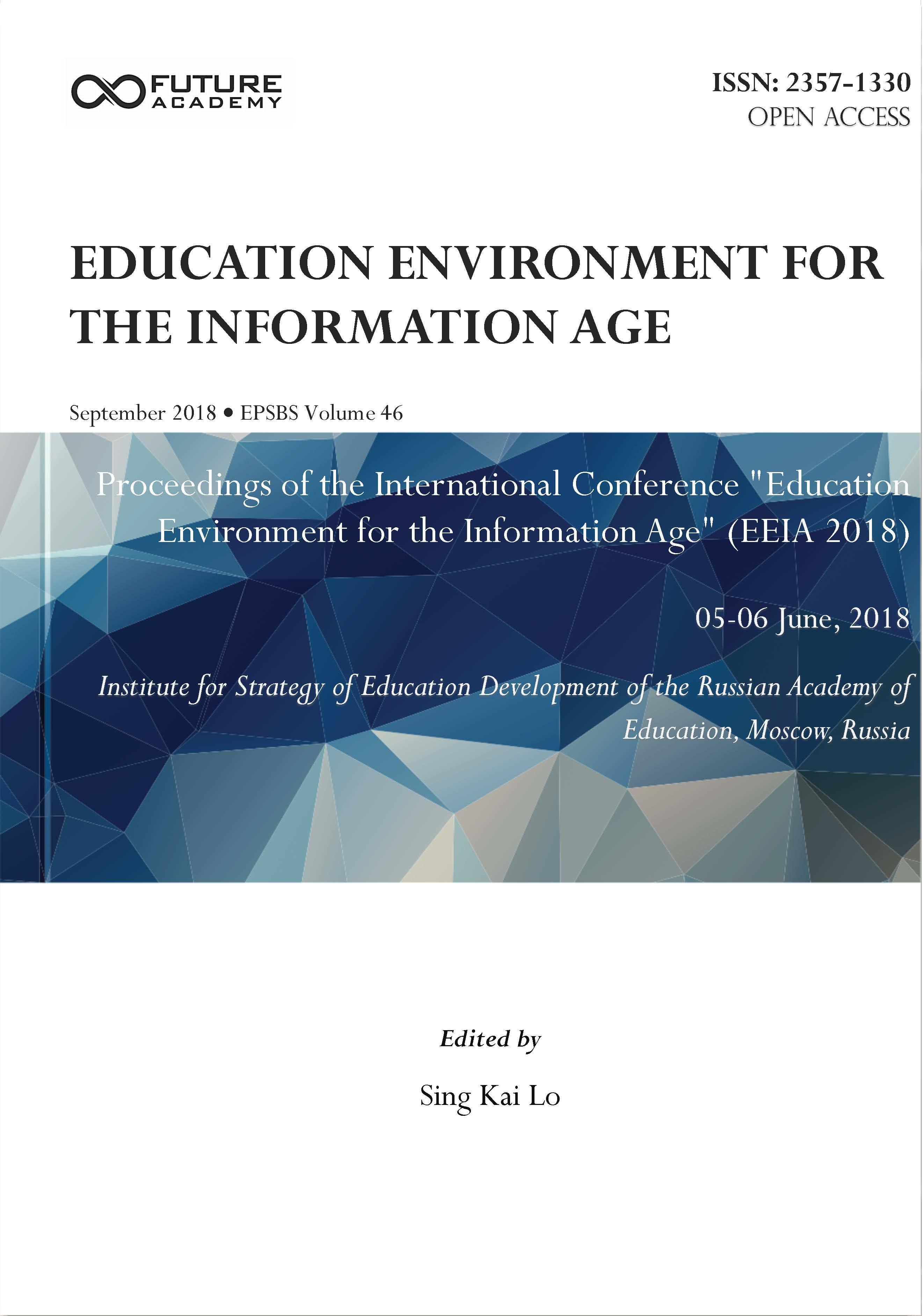 The article deals with the problem of development of musical perception of schoolchildren. Its success is associated with the introduction of students to productive artistic activity on the basis of innovative technology of interactive music-making. The essence of the technology is to live music in the process of its execution on the basis of complementary interaction with an external source of sound. Access to this technology can significantly simplify the operational component of musical activity and make this activity available to all students. Theoretical basis of research are the concepts of B. V. Asafiev (intonational nature of music), D. B. Kabalevsky (meaningful and heartfelt perception – the basis of introducing a child to music), L. S. Vygotsky and P. Y. Galperin (unity of consciousness and activity) D. B. Elkonin and V. V. Davydov (the theory of developmental education). The article reveals the educational potential of musical activities that support the audience perception (graphic and plastic modeling of instrumental music, effective analysis of musical and stage images, etc.). The theoretical results of the research are supported by the practice of introducing the new pedagogical technology, which made it possible to implement major educational projects: "Children on the Opera stage", "Music for all" with the participation of large groups of students together with professional Opera companies and orchestras in Moscow, Yoshkar-Ola, Perm, Samara and Yakutsk.

The development of music perception in Russian pedagogics is interpreted as the basis for the formation of musical culture of schoolchildren. According to D. B. Kabalevsky, "...perception is the basis of musical art in all its manifestations: both in creativity, and in performance, and in hearing, and, of course, in its study" (Kabalevsky, 2006). In this area developed valuable methods associated with setting students on the right imagery and emotions through speech, gesture, repeated listening, vocalizing and playing musical instruments (Asafiev, 1973; Grodzenskaya, 1969; Jaworsky, 1972).

However, we can talk about the inverse relationship. It is known that the activity generates perception (Galperin, 2011; Elkonin, 1974; Davydov, 2000; Vygotsky, 2017). Musical perception develops most effectively in the process of productive musical activity (Asafiev, 1973; Shkolyar & Alekseeva, 2014; Akishina, 2016). Determining the possibilities of this inverse relationship in the practice of general music education is an urgent task. This task is the subject of the research reflected in the proposed article.

One of the problems of musical education is the disparity of the level of musical performance of the children with their vision of the reference sound (especially in a situation of wide spread of high quality copies of music). From class to class, the gap between the need for students to be actively involved in musical works (especially outstanding classical samples) and the limitations of their performance abilities is widening. This gap has a negative impact on music education at school, as it reduces the motivation of students to music-making (Bonneville-Roussy, Rentfrow, Xu & Potter, 2013; Cabanac, Perlovsky, Bonniot-Cabanac & Cabanac, 2013; Greenberg, Baron-Cohen, Stillwell, Kosinski & Rentfrow, 2015; Korinets, 2016).

How can we achieve high quality of musical product with low skills of music-making in the majority of students? Here's the problem, the solution of which determines largely on the overcoming of negative attitude students to music-making ("so as I can – don't want"), which opens up great possibilities in the development of their musical perception and increase the effectiveness of mass musical education in general.

To solve this problem it is necessary to answer the following questions.

The answer to the first question will allow us to create conditions for increase motivation of students to musical performance and thereby – to give in teacher’s hands the effective tool of development of their musical perception. And the answer to the second question will determine the degree of effectiveness of the development musical perception of schoolchildren by introducing them to different types of performance.

The aim of the study is to determine the ways of developing the musical perception of schoolchildren by introducing them to interactive music-making, which makes it possible to facilitate the operational component of musical performance while maintaining the high artistic quality of children's creativity products.

Analysis of musical works of developed genres and forms in order to determine the possibilities of facilitating the operational component of the schoolchildren' activities in the process of their music-making; checking the effectiveness of the development of the perception of schoolchildren musical works of different genres and forms in the conditions of traditional and innovative approaches to musical learning (questioning, interviewing, written surveys); generalization of pedagogical experience (Miendlarzewska, & Trost, 2014; Corrigall, Schellenberg, & Misura, 2013; Sheau-Yuh, 2010; Pesek, Strle, Kavčič, Marolt, 2017; Schoeller, 2015; Rabinowitch, Cross, & Burnard, 2013; Perlovsky, 2016; Gavrilova, 2014; Aviram, 2010).

The study was conducted on the basis of 25 educational institutions of Moscow, Yoshkar-Ola and the Republic of Mari El, Samara and Samara region, Perm and Perm region, Yakutsk and the Republic of Sakha (Yakutia). The study involved music and primary school teachers, primary and primary school students, their parents, teachers of children's art schools, independent experts – artists, chorus masters, directors, conductors of Opera theaters.

This article offers innovative technologies for the development of musical perception of schoolchildren through activation of their musical activity, formulates criteria of an assessment of this development in the conditions of comprehensive schools are, and analyzes the received results.

In order to achieve a new level of perception development, the technology of interactive music-making (I. M. Krasilnikov) is used, which includes a set of special types of musical activity that support the perception of music by children. Their essence consists in feeling music by children in the process of its execution in complementary interaction with the external source of sound (soundtrack, playing by teacher or professional musicians, including orchestras) (Krasilnikov, 2015, p. 110). These activities are characterized by the simplest ways of music-making: vocalization instead of professionally oriented choral singing, the simplest methods in instrumental performance, etc.

We can distinguish two types of interactive musical activities. The first type assumes the inclusion children in the creation of musical and sound image. Due to the addition of the texture (by means singing along, playing along elementary instruments etc.), the musical whole becomes acoustic complete and meaningful sense, despite the easiness parts of students and a simplicity of their implementation. Schoolchildren carry out the reflection not only of his party, but the parties of his fellows – accomplices of the ensemble of electronic and elementary instruments as well as external source.

The second type of collective interactive music-making covers interaction of external source of musical sounding and corresponding actions of each child (intonation of the listener). Their task is to immerse into a musical work in the unity of its content and form. On the organization of this actions directed methods of “palmophony” and “palmography” (Krasilnikova, 2002), involving the creation of children motor and graphic analogues of the music. These methods are especially effective in the study of instrumental music (pieces, overtures, concerts, symphonies, poems, etc.).

The method of “palmophony” allows schoolchildren to “roll” into the melodic line all the layers of texture and output audible to the external plan – “paint” the melody with your hand in the air (“general plan” of the musical material), feeling and recognizing its pitch and rhythmic motion. The language of gesture is perfectly adapted for the reflection of identity (the repetition and the change of motives, phrases, themes-images, stages of development, sections of the work, thematic arches, reminiscences) and contrast (dynamic, register, timbre, genre, texture, thematic, etc.) at different levels of the musical form, the transfer of rhetorical figures (question, exclamation, request, etc.). All this contributes to the meaningfulness and integrity of the plastic performance of music, allows children to express not only the nature of the sounding musical images, but also the logic of their development and transformation.

The method of “palmography” is a gradual transfer movements “singing” in the air hands on the plane, creating a graphic record of work, which by the line, touch character reflects the sequential development of musical thoughts. That type of recording allows you to quickly and easily capture not only the main themes of the work, but also large constructions, up to the creation of the score of the whole symphony. The graphic score reflects not every voice of the performer (as in the musical score), but the most important, catchy plans of the musical texture expressing musical dramaturgy of the work. The inevitable loss in accuracy (compared to the musical score) is compensated by the coverage of the work as a whole. This corresponds to the methodical task: to help the student-listener to keep in mind the instrumental musical works entirely, to "see" them in detail, to remember and delve into the meaning of individual fragments, to stop, to sing aloud or to himself, with acceleration or deceleration, etc.

Plastic and graphic models are aimed at the listener, they help students to comprehend the musical work more deeply, to remember and reproduce it more accurately. Each of them reveals the subject of reflection in a special perspective. A plastic model is a variant of a performing interpretation of a musical composition or, otherwise, a plastic interpretation of a performing interpretation of a composition. It is emotional, imaginative, effective. Written fixation more grasps the composer's basis (text) of the composition, it is inseparable from detailed listening to the musical work, understanding of the most important means of musical expressiveness. The main thing – it allows you to immerse child in a music composition, to follow "sound by sound" the whole process of its development. An important incentive for interactive music-making is to meet the needs of children to expand the content field, style and genre palette of mastered compositions. The combined result creates a situation of success, motivating schoolchildren to this musical activity.

The presented methods are focused on mass musical education, they give children the opportunity not only to master musical works fully (including symphonies and operas) at an unprecedented high level, but also to publicly present the results of their work on amateur and professional stages. The latter circumstance breaks the closed space of the music lesson and connects it with the real existence of art. The proposed educational technology open new opportunities for extra-curricular music activities in various forms of representation of student achievement: performances of the project "Children in Opera stages" with the participation of about 200 students accompanied singers and orchestras in professional Opera theatres; concerts of the project "Music for all" with the participation of 250-300 schoolchildren, accompanied by professional orchestras; and "competition for conductors", "festivals connoisseurs of symphonic music," etc. (Krasilnikov, 2015; Krasilnikova & Yashmolkina, 2017).

A child or a teenager, inspired by the results of his / her multi-musical activity in the school class and, especially, performing on the same stage together with professionals, experiences unforgettable emotions, which determine for many years his / her deep interest in musical art. All this allows us to speak about achievement of qualitatively new, breakthrough result in mass musical education.

The effectiveness of the interactive approach in the children's study of musical works was determined by special techniques. In the control classes instrumental compositions were studied, using traditional methods, and in the experimental classes were used methods of palmophony and plamography.

The results of the research were obtained within the framework of the state task of the Ministry of Education and Science of Russia on the project "Development of artistic talent of children and youth by means of information and communication technologies", 27.8719.2017/PM (Issue for publications: 27.8719.2017/8.9). The authors express their gratitude to the leadership of Federal State Budget Research Institution “Institute of Art Education and Cultural Studies of the Russian Academy of Education” for his scientific and material support of the research, teachers of the experimental base of the research: the educational institutions in Moscow, Samara, Perm and the Perm region, the Republic of Mari El, the Republic of Sakha (Yakutia), educational institutions, universities, creative music groups, which assist in the conduct of experimental work on approbation of innovative technologies.