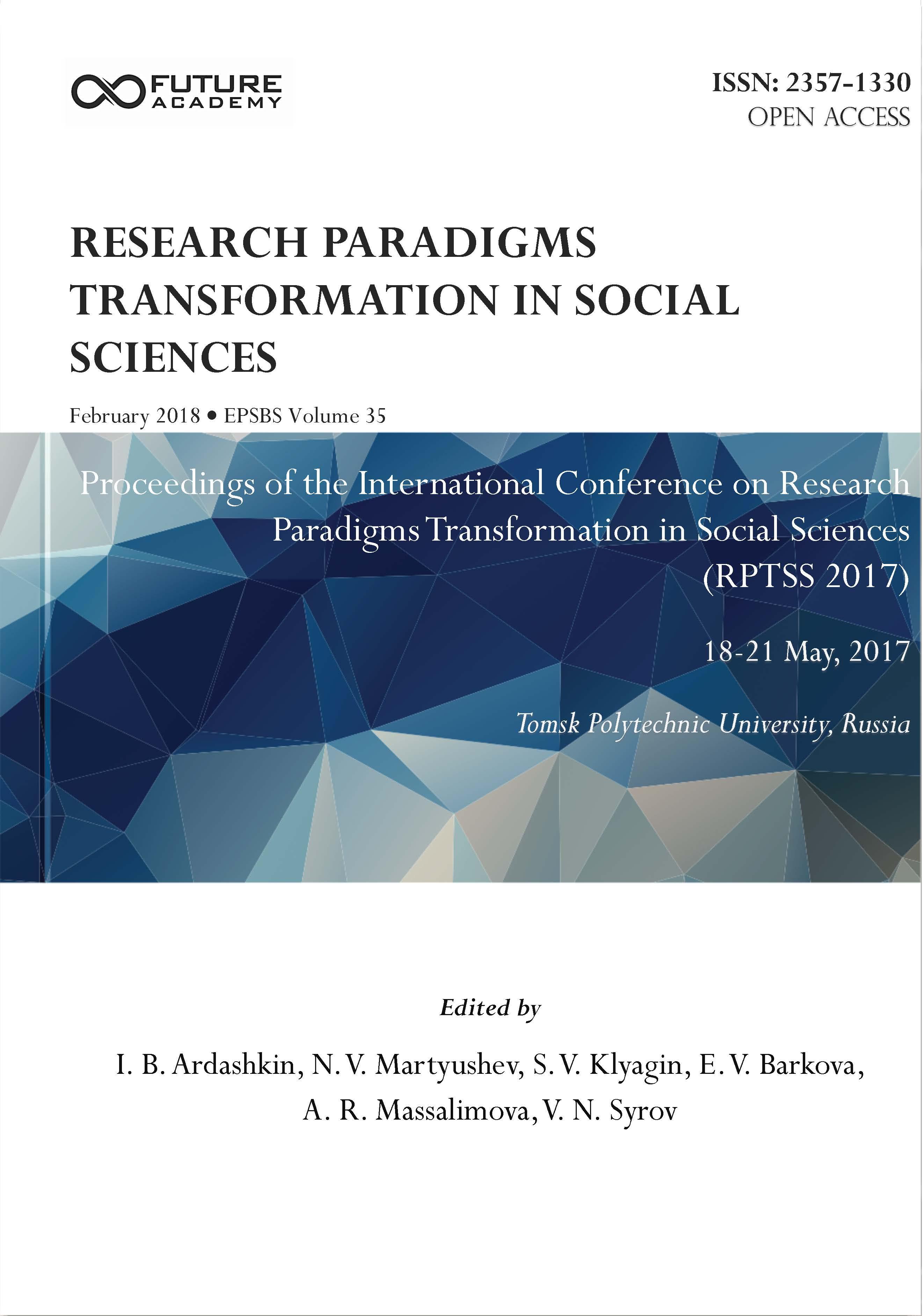 The principal originality in the research of the integrating idea is in its significant impact on the relationship contents among the authorities, society and business. First of all, this concerns science, education, economy and management, inseparably linked with each other and transforming the process into a wide and significant research environment. The article covers the features of social economic development of the post-industrial societies, principles of integration of authorities, education, science and manufacture of the advanced technologies. Let us highlight the necessary conditions to reach the innovative results within the system of education and science. The functional features of a flagship university are stated in the innovative activity based on general scientific notions. In addition it is possible to point out the characteristics of an integration course of the flagship university. Using interdisciplinary and transdisciplinary types of integration of scientific knowledge demonstrates one of the main goals for a flagship university.

Both from scientists and researchers’ viewpoints, understanding the unity and deep interaction among laws of nature, laws of a society, the latest achievements in the education, science and technology as well as needs of a person development should be in the basis of the region innovation policy. The authors believe that the headnote that the authors consider is a starting point to the theoretical, comprehensive analysis of a phenomenon called “innovation policy”. It determines general scientific and general sociological approaches to research the essence of the innovation process relating to a whole region (including its important element as improving the quality of people’s life). The authors find the essential originality of the headnote in its radical impact on the content of relationships among the authorities, a society and business. First of all, the matter is a fast-paced approach of science, education, economy and management to each other, and transformation of the process into a wide and significant integrated research environment.

The given integrated approach as a research subject is certainly adequate to the principles and living standards of so-called information-technological, post-industrial society: both the new type of society (firmly established in the developed countries) and the type of analysed scientific integration have common fundamental condition of their existence – global information and communication revolution. In its turn, the accelerated development of information-communication technologies (ICT) is considered as a beginning information economics epoch, when knowledge and information transform into the most significant product, into the specific capital variety (Machlup, 1962).

The success of developing information technologies in the economics and social life is an important reason for scientists to announce coming a new world order called “information society”. Western scientists such as Webster (2004) share this viewpoint. The Russian publications support a different approach to the historical evaluation of the significant factors of the human beings. In particular, the information factor takes only one of the significant places in spite of all its importance. For example, V.V. Ivanov inclines not to make the information factor absolute. “In some occasions”, he explains his view, “we will assume that post-industrial society is a wider notion, the information sector is the most important constituent of post-industrial economics”(Ivanov, 2015).

Among the factors, being the basis of origin and development of post-industrial society, it is necessary to highlight scientific knowledge (of the purest theoretical knowledge) besides the information component. These are fundamental parts of scientific knowledge that determine promising development directions of both ICT and the modern society as a whole (Ivanov, 2013). Since from the economic viewpoint, scientific and science-technical knowledge is a version of capital, the potential of economic development of a country is determined by the available knowledge and information, the possibility of their constant generation and constant application to innovation transformation, manufacture of the newest types of products and services meeting the social requirements. Under these circumstances, the society development depends on real achievements of science and its possibilities to be forecast as perspective and innovative with a certain level of probability. Before the current moment, the science has never been used so intensively in different spheres of social life.

The purpose of the study is to analyse the specific features of functioning a flagship university from the general scientific notion, to determine an approach of integrated interaction among higher education, modern technology development, business and socio-economic management of society life.

The main directions of the research are the following: firstly, new interdisciplinary directions of development under the ICT conditions of net-work character, they happen not according to the type of the formed interdisciplinary phenomenon in cybernetics (when N. Wiener developed it as a science), but due to the type of “on-line” interdisciplinary interactions similar to, for example, modern NIBC-convergence (Roco, Bainbridge, 2004). Secondly, the subject of the scientific research is for the first time the search for scientific foundation, relating to the unusual integrated transdisciplinary unity, which in its essence is the possible unity among different spheres of cognition, such as between science and policy (or among science, manufacture and geopolitics). Thirdly, the research has to accompany the revolutionary new theoretical moment, it is a search for a special (newest) methodological basis of their establishing. Fourthly, the stated above newest integrated interactions directly relate to determining specific features of a flagship university activity.

The application of research methodology of the authors is based on the theory of post-industrial society and its central notion – “knowledge society”. The research also applies interdisciplinary, system and structural-functional approaches to interpret the essence of the analysed phenomena.

Currently the researchers all over the world pay great attention to the integration of education and science, science and business, education and a regional development strategy. Although the total range of integration is analysed from specific scientific, specific, sociological and economical viewpoints. Unlike Russian scientists, other scientists do not aspire to realising conceptual general scientific research covering innovation agenda from the standpoint of an absolutely new type of rationality, a new type of scientific integration, that is transdisciplinary integration. In this case, the interdisciplinary (not the transdisciplinary) approach of methodology is realised, for example, in the article covering the management of innovation integrating structures of education, business and science (Fetschenko et al., 2015). Let us find the similar analysis style in the articles (Charron, Rothstein, 2016; Pang, 2014), though the value of their contents is certainly to be in uncovering the details of innovation activity or in special integration of education and science under the condition of specific manufacture. The research subject of this article is notable for its generalising methodological focus. The authors are interested in the search for the newest theoretical and methodological approaches to realisation of transdisciplinary scientific integration in the process of meeting innovation demands of the authorities, education and entrepreneurship.

Inter-industry and interdisciplinary types of scientific integration are an inseparable unity to solve all kinds of important complex questions in production and socio-economic spheres, especially, as applied to information technologies. For example, a wide range of research is presented in the area of healthcare and information technology implementation (Franco de Camargo et al., 2017).

New information-communication technologies penetrate into business life in various contexts. People use them as a tool to develop innovative solutions to different problems connected with the society. The practice is critical for interdisciplinary study of climate conditions during conducting complex socio-economic research (Klink et al., 2017). The similar situation appears while governments deal with environmental protection issues in the whole world (Bark et al., 2016). The authors could also mention the same process in power economy (Schuitema, Sintov, 2017).

The public awareness has formed the following idea: if countries obtain successful integration of a state, science, education and business, they belong to the category of countries with the sustainable tendencies of development and the ability to integrate fast into the modern social economical world order. Therefore, the main result of increasing the application of information computer technologies is the process of substituting menial labour share for the intellectual highly skilled labour to be the term of country’s belonging to post-industrial society. The publications determine the target function of this development stage as improving the life quality, it is achieved primarily due to radical change of a character and impact of knowledge on the social life problem solution. It is the excessive demand for trained professionals that requires the restructuring of the system of education and personnel retraining in a country. A new system of education combines its fundamental part with special training of highly qualified professionals; it definitely assumes the creation of scientific, technical and administrative elites. In the system of education (especially university education), the significant part of knowledge should be a product of fundamental sciences. Under the continuity of the educational process, the issue of relatedness of fundamental and specialised knowledge takes a special place. Education is one of the main factors of society development, therefore, it is considered as the most significant state function, it being not less important than providing national security. The new system of education should focus on upbringing a creative person, an innovative person having sustainable world outlook and being the main resource, the main motivation for development.

The modern science-technical revolution has a permanent character motivating innovative changes in the society life in the form of continuous sequence. They involve the total system of permanent renewed scientific knowledge into their system, the knowledge interaction with the advanced technologies and social factor transformation (population employment structure, people’s life quality in the region community). The uniform integral quality is created in the process of integration of science, education, economy, manufacture and consumption; the quality becomes one of the basic factors of science and education development. The given circumstance makes the researchers focus on studying and perfecting a flagship university activity. The flagship university activity is supposed to optimise the knowledge and information streams within the frame of the information-communication system “science – education – business – manufacture – population employment structure”. This will definitely force the scientists mainstream to realise the regional innovation strategy, to research a scientific determination of the term. The process results in the detailed development of the concept such as “the territory of innovation development” as well as its practical application: megalopoleis, university towns, technopoleis, certain economic areas and some other territories.

The authors are ready to propose several important problems to solve based on the authors’ analysis of significant issues concerning the current state of science and education in the country and their integration into the authorities and business, and the original theses of a flagship university. They are:

1. Developing interdisciplinary and transdisciplinary approaches of the research founded on the innovation basis, training highly skilled professionals according to the multibranch structure of the regional manufacture and economy growth.

2. Developing scientific criteria for application in the regional strategy of improving life quality based on increasing the share of highly skilled personnel in the sphere of population employment in the manufacture, economical sector and social activity.

3. Participating actively in the regional creation of the most important practical applications of science and technologies: megalopolises, university towns, technopoleis, certain economic areas and other territories.

4. Performing close collaboration of fundamental research with other scientific and educational centres of the region (for example, federal university, a branch of the Russian Academy of Science).

Therefore, a main functional feature of a flagship university is characterised with the process of closing-in movement of education, science, authority and business and further transformation of the process into the integrated research environment with simultaneous development of transdisciplinary-type integration of scientific knowledge.