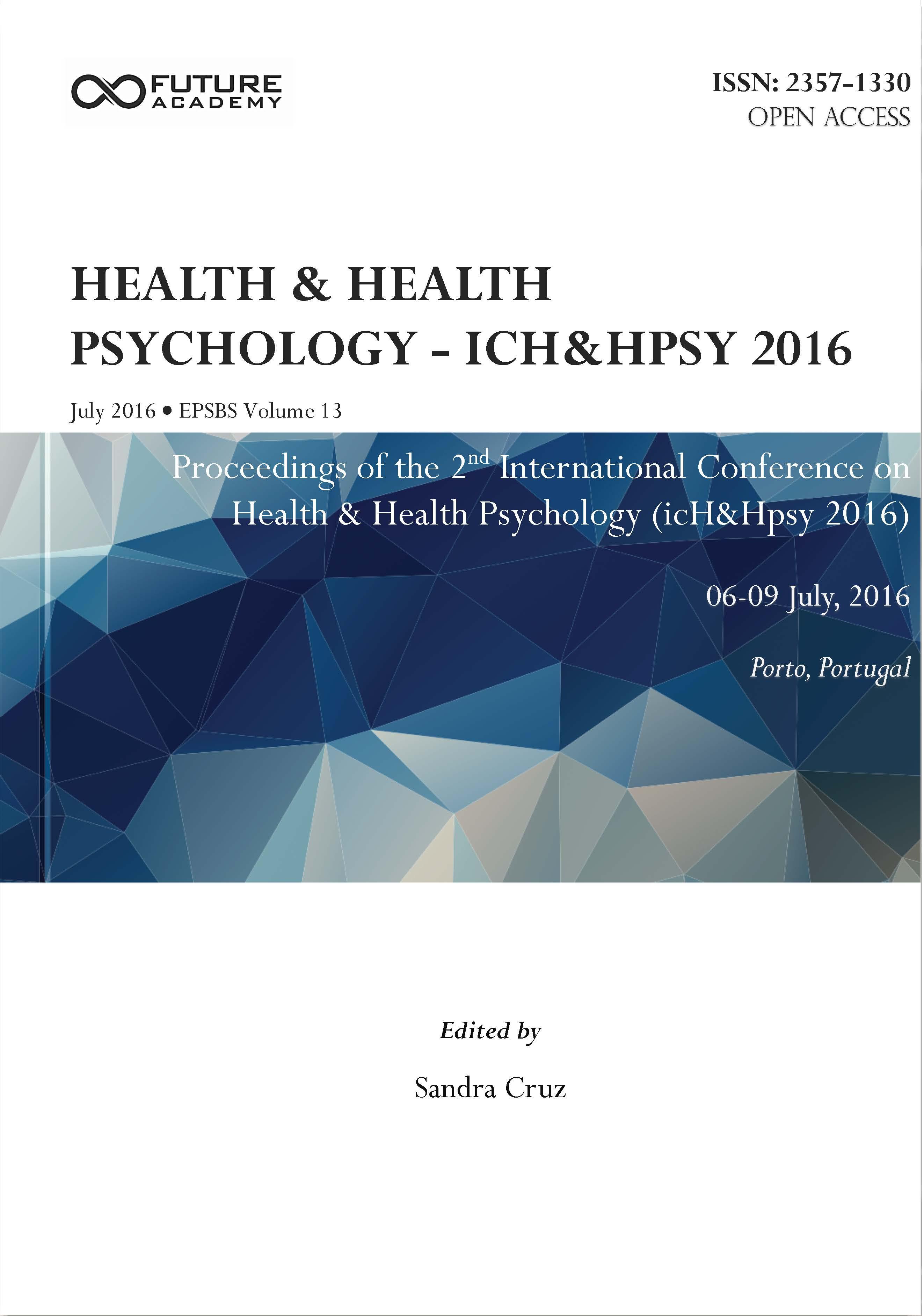 Personality and Suffering in the Hospitalized Chronically Ill

The development of studies correlating personality traits with suffering in illness can be very useful to understand the chronically ill response in a transitional health/ disease process. Do the “” correlate with personality traits of the hospitalized chronically ill? Do sociodemographic, familiar and clinical variables correlate with personality traits of the hospitalized chronically ill? The purpose of the study is to understand which “” traits are present in the hospitalized chronically ill, and the correlation with the “”, sociodemographic, familiar and clinical variables. This is a non-experimental, cross-sectional descriptive-correlational and quantitative study, used in a non-probabilistic convenience sample of 307 hospitalized chronically ill. Data were collected through a questionnaire between January and June 2013. It was requested the permission of the´s ethics committee, as well as the informed consent of each participant. Data processing was performed statistically. The participants in our study had higher values of "" than those of the authors of the NEO-FFI-20 inventory. The variable "" explains 12.5% of the variance of "". "", is associated inversely with the experience of "”, which is when it increases hope and “”, decreases the "" of the chronically ill. The evidence invites us to reflect on the influence of intrinsic factors in suffering. Patients deal with life/ disease in many diferent ways, wich affects the response to the transitional health/ disease process.

Nurses daily witness human suffering, and the care providers in the hospital, who spend more time with patients and families. With the increased longevity, the presence of chronically ill are increasingly common in Portuguese hospitals. These patients do not expect healing and have to learn to deal with this condition, which makes the biomedical model misfit to their real needs. Thus, comprehend and alleviate the suffering should be understood as key elements of nursing care, should be an ethical and moral concern to demand its relief.

Suffering comes from the perceived treat, which is understood as anything that messes with our continuity, integrity, ability to cope and respond (Barbosa, 2010). Results from a life changing process (intentional or not) that leads the individual to a transition process (healthy or pathological) that exposes to a vulnerability and risks that may significantly affect their health (Meleis, Sawyer, Im, Hilfinger Messias, & Schumacher, 2000).

In our view, human suffering may be associated with an intrinsic and at the same time dynamic factor of the person: personality. According to McCrae & Costa (1996) personality is a sistem made of personality traits and dynamic processes by which affect the individual’s psychological processes. The study of personality has been closely associated with the degree of vulnerability to stress and risk health behaviours (Bennett, 2002; Alminhana & Moreira-Almeida, 2009 and Sutin, Zonderman, Ferrucci, & Terraciano, 2013).

Thus we believe that the development of studies correlating personality traits with suffering in illness, are in our understanding of great relevance and usefulness if we consider the personality as an intrinsic factor of the person, which is not “immutable” (Chapman, Hampson, & Clarkin, 2014) and may condition his response to a transition process.

Theoretical personality models today commonly used in health psychology and liaison psychiatry are: the three-factor Eysenck model (“”, “”, “”) and the five factors of McCrae & Costa (Telles-Correia, Barbosa, & Mega, 2010). However, these issues have not achieved consensus among authors. Personality psychologists do not agree on the number of dimensions that characterize the personality, with the model of the big five factors which brings together the largest consensus (Hansenne, 2004).

The five factors model, developed by McCrae & Costa (1996), is based on the model of the three factors. The authors consider that low “conscientiousness” and “agreeableness” correspond to the size of “psychoticism” in the three-dimensional model, so they chose to eliminate this last dimention. They assumed to identify “neuroticism” and “extroversion” as basic personality traits and add three new concepts: – more organized and determined individuals; – more honest people, sincere and willing to help others; “openness to experience” – more curious individuals on the outer and inner world, openned to new ideas and experiences.

Among the most widespread instruments are the Revised NEO Personality Inventory (NEO PI-R) with 240 items and its reduced version NEO Five-Factor Inventory (NEO-FFI) that comprises 60 items of McCrae & Costa (1989). However, to integrate instruments with various variables they reveal to be very extensive, reducing the adhesion of the participants, which represents a limitation. For this reason, Bertoquini & Pais-Ribeiro (2006) felt the need to build a very small scale of 20 items (NEO-FFI-20), based on the NEO-PI-R, which has proved convergent validity, discriminant and concurrent. It proved to be especially useful when time is limited and global information on the personality is enough (Bertoquini & Pais-Ribeiro, 2006).

The development of studies correlating personality traits with suffering in illness are scarce and show to be very helpful in understanding and organizing responses to the chronically ill in a transitional health/disease process.

Do sociodemographic, familiar and clinical variables correlate with personality traits of the hospitalized chronically ill?

Do the “” correlate with personality traits of the hospitalized chronically ill?

To identify the “personality traits” of the hospitalized chronically ill and their correlation with sociodemographic, familiar, clinical and suffering variables.

This is a non-experimental, cross-sectional descriptive-correlational and quantitative study. The sample is a non-probabilistic convenience.

The study took place in the “”, a Portuguese central hospital. Participated 307 hospitalized patients with the following inclusion criteria: (1) to have more than 18 years old, (2) no vital function compromised, (3) no psychiatric pathology diagnosed, (4) to have a chronic disease, (5) to be oriented in time and space, (6) to be able to answer the questionnaire.

Data were collected through a questionnaire that integrates family APGAR scale of Smilkinstein, the Inventory of Subjective Experiences of Suffering in Disease (IESSD, "") from McIntyre & Gameiro (1999) and the NEO-FFI-20 Personality Inventory (Bertoquini & Pais Ribeiro, 2006).

The IESSD inventory was applied to 125 adult patients with two or more days of hospitalization. The last version of the inventory has 44 items answered on a 5-point Likert format ranging from totally false to correspond fully. It assesses 5 dimensions: psychological suffering, physical, existential and socio relational, and positive experiences of suffering. The global scale score is the sum of all items: the highest score corresponds to a higher subjective experience of suffering in disease. The internal consistencies of the global scale are higher than 0.9, which is very good.

This is a much reduced version of the Revised NEO Personality Inventory (NEO-PI-R) of Costa &McCrae (1992). NEO-FFI-20 was constructed and validated for Portuguese population by Bertoquini & Pais-Ribeiro (2006), who consider that when general information about personality is enough, this can be a useful instrument. It consists of 20 items answered on a 5-point Likert format ranging from strongly disagree to strongly agree, which assesses the 5 “”: and. The internal consistencies are higher than 0.70 which is satisfactory.

It was requested the permission of the hospital’s ethic committee who gave its approval. Participants were informed of the purpose and objectives of the study, such as the right to withdraw from it at any time, free of any coercion, seeking protection against the discomfort and injury. The free informed consent was obtained, being assured respect for autonomy, privacy, anonymity and confidentiality.

Data processing was performed statistically with SPSS Statistics 19.0 (Statistical Package for the Social Sciences). The quantitative variables were expressed by mean ± standard deviation and coefficient of variation. The qualitative variables were expressed through frequencies after content analysis. To study the variables’ correlation it was used the Mann Whitney U test, Kruskal-Wallis H test, the Student t distribution, one-way ANOVA and simple linear regression.

Results indicate that our sample is mainly male (51.1%), constituted by hospitalized chronically ill between 26 and 91 years old, with a mean () of 64.84 years, a standard deviation () of 14.989 years and a coefficient of variation () of 23.1%, indicating the existence of moderate dispersion around the mean.

In order to evaluate the chronically ill´s “”, it was used the NEO-FFI-20 personality inventory. The inventory´s results are evaluated according to the mean of each one of its five dimensions: “”, “”, and “”, “” and “”. The highest score on a determined dimension corresponds to a higher presence of that personality trait.

The comparative study between our investigation and the scale authors’ results (Bertoquini & Pais-Ribeiro, 2006), reveals that our sample has more traits then the one studied by the authors (=8.81 vs.=8.22). In the remaining dimensions the sample used by the authors is more extroverted, kind, conscientious and greater openness to experience.

Next, we will present the correlation study between the “” and “”, sociodemographic variables, social-familial and clinical. For this we used the Mann Whitney U test (), Kruskal-Wallis H test (), the Student t distribution (), one-way ANOVA () and simple linear regression ().

Therefore it is concluded that “” influences the “”.

To study the effect of “pathology” in “personality traits”, it was performed Kruskal-Wallis H test () and one-way ANOVA (). By the detailed data analysis (cf. Table4) we can see that the respondents with a “” disease have a predominant neurotic personality (H=49.377; p=0.000).

Therefore we conclude that the “” causes significant influence in “”.

The comparative analysis between this research and the results obtained by the authors of the scale (Bertoquini & Pais-Ribeiro, 2006) reveals that our sample has averaged more traits of “” (=8.81 vs.=8.22). In the remaining dimensions we find that the sample used by Bertoquini & Pais-Ribeiro (2006) is more outgoing, kind, conscientious and with greater. These results may be explained by the average age of our sample and the fact that they have chronic diseases diagnosed.

The results corroborate the meta-analysis of Jokela, Haculinen, Singh-Manoux, & Kivimäki (2014), which reveals personality changes after the onset of a chronic disease, with consistent reductions in but not in. These personality changes acentuated with age, with the presence of more than one chronic disease, correnponding the biggest changes to the presence of co-morbidities (Jokela, Haculinen, Singh-Manoux, & Kivimäki, 2014).

Hospitalized chronic patients with the highest levels of, that is, the most emotionaly unstable, are women, older, belonging to the professional group with and disease. The explains 1.3% of the variance of.

The more extroverted are unaccompained by a spouse, with pathology and explais 1.6% of the variance of the. In turn, people with are the most thoughtful and calm.

People with greater are the youngest, belonging to the professional group, with a monthly income higher than €1000, with, inserted in less functional families, “” pathology, whose “” variance is less 5.8%.

The “agreeableness” is more prevalent in women, in the professional group, in the iliterate people, osteoarticular pathology, whose “suffering” variance is 1.9% lower.

Finally, the most conscientious hospitalized chronically ill are women who live without the company of a spouse, unemployed, with a monthly income less than €300, with “primary education”, belonging to less functional families, with neurological disease. As for the experience of “”, the same determined and organized people are those who suffer the most (10.8% of the variance of “”).

In conclusion we can say that in fact the personality is an active process, intrinsic to the human being responsible for how each one approaches life and how he relates to the other; some personality traits are more related to exposure to risky health behaviours: high and low (Sutin, Zonderman, Ferrucci, & Terraciano, 2013). In turn, the chronic disease is seen as potentiating personality changes (Jokela, Haculinen, Singh-Manoux, & Kivimäki, 2014) so, early intervention in relevant aspects of personality is seen as necessary to improve the health, greater suitability of people treatments such as more accurate resource allocation improving the cost-effectiveness (Chapman, Hampson, & Clarkin, 2014).

For nursing practice, the comprehension of this problem becomes essential since it can allow enhance health gains, ensuring the chronically ill a heathy adaptation. However, due to the lack of studies in the field of personality and the chronically ill suffering relief, is to respond if the suffering in illness can be alleviated with intervention actions in relevant aspects of personality.

We believe that the study of the chronically ill’s personality should be deeper, for a more targeted treatment, more personalized, holistic and if necessary a multidisciplinary intervention care.

We would like to express our gratitude toand all participants for sharing their most intimate feelings and experiences.