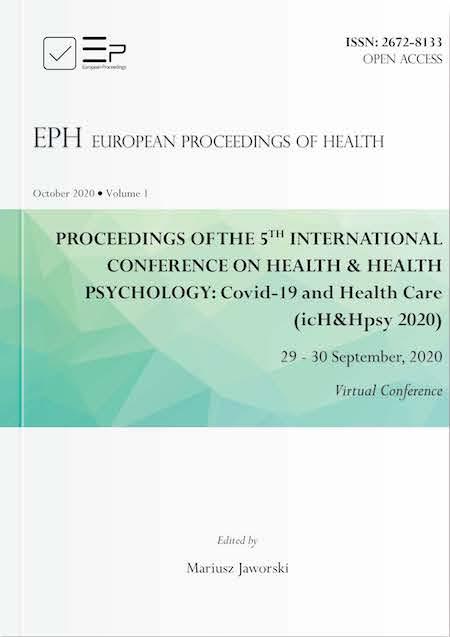 Depressive Symptoms Postpartum: A Study On Women With Nausea/Vomiting During Pregnancy

Several studies have found that persistent nausea and vomiting during pregnancy (NVP) was associated with unplanned and unwanted pregnancy and increased depressive and anxious symptoms after childbirth. Some authors stated that persistent NVP could represent somatic symptoms of intrapsychic difficulty in acquiring the maternal role. The present research aimed to assess the associations between NVP during pregnancy and presence of post-partum depressive and anxious symptoms, when children aged between 3 and 6 months. N=50 mothers of children aged between 3 and 6 months were recruited. Self-report questionnaires to assess postpartum depression and anxiety were administered. Furthermore, a sociodemographic questionnaire assessing also pregnancy variables (such as the presence of nausea and vomiting in the three trimesters of pregnancy) was administered. in line with literature, results show an association between the persistence of vomiting during pregnancy and postpartum depressive and anxious symptoms. However, no associations between the persistence of nausea and postpartum psychopathological symptoms were found. We assume that vomiting is a psychosomatic manifestation of intrapsychic malaise, which can lead to subsequent anxious/depressive symptoms. Indeed, these results allow us to evaluate possible risk factors and to activate prevention programs for postpartum depression during pregnancy.

The birth of a child leads to a change of identity from "woman" to "mother". In this difficult phase, women could show psychopathological symptoms that vary in frequency and intensity, and short and long-term effects on the health of the mother and/or the child. Often these are mild anxiety-depression symptoms, but in some cases they can reach higher severity levels. Anxious or depressive states in pregnancy persist in a high number of cases of postpartum depression (Bell et al., 2016; Falah-Hassani et al., 2016), whose negative effects on child psychic development have been widely documented (Mandl et al., 1999; Murray et al., 1999). It is important to be able to detect symptoms of psychological distress that arise in the prenatal period at an early stage. In recent years, particular attention has been paid to the study of possible risk factors associated with the postpartum depression (Ghaedrahmati et al., 2017; Smorti et al., 2019) and on postpartum anxiety (Dennis et al., 2016). In this field, recent studies have shown the association between some physical symptoms during pregnancy, such as nausea, vomiting, sleepiness and increased psychopathological symptoms in mothers (Beyazit & Sahin, 2018; Iliadis et al., 2018; Leeners et al., 2000). In particular, Leeners et al. (2000) stated that feelings of ambivalence towards pregnancy, with an unconscious rejection of pregnancy, could predict the development of the nausea and vomiting in pregnant.

Nausea and vomiting are frequent during the early weeks of pregnancy, and the 50-80% of pregnant women have shown these symptoms extending until childbirth (Einarson et al., 2013; Gadsby et al., 1993; Jarvis & Nelson-Piercy, 2011; Lee & Saha, 2011; McCarthy et al., 2014; Nazik & Eryilmaz, 2014). These symptoms begin in the first trimester, with a peak at around nine gestational weeks and usually decrease at 20th gestational weeks (Einarson et al., 2013). However, sometimes the symptoms are persistent.

Furthermore, little is known about the persistent form of NVP (during the second and third trimester of pregnancy), that no progressed to HG. Beyazit and Sahin (2018) found that pregnant women with severe NVP experienced a higher level of anxiety and depression during pregnancy and Iliadis et al. (2018) found that women with prolonged nausea have increased risk of depressive symptoms when their children were 2 months.

Some authors stated that persistent NVP could represent somatic symptoms of intrapsychic difficulty in acquiring the maternal role (FitzGerald, 1984). The difficulty in acquiring one's maternal role can lead to post-partum depression. However, there are no studies that have investigated a possible association between nausea and vomiting during pregnancy and subsequent anxious and depressive symptoms.

Based on previous literature, the present study aimed to assess the associations between NVP during pregnancy and presence of post-partum depressive and anxious symptoms, when children aged between 3 and 6 months.

Specifically, we assumed that nausea and vomiting during all three trimesters of pregnancy were associated with both anxiety and depression during postpartum.

Thanks to the collaboration with public and private health centers and hospitals, N=50 mothers of children aged between 3 and 6 months were recruited.

Exclusion criteria were been: fetal congenital malformations, a systemic or hormonal disease that can cause nausea and vomiting, diabetes mellitus, previous psychiatric disorders, and known obstetric complications.

N= 20 mothers (40%) had other children. Regard the level of education, 24% of sample had a university degree and 56% had high school diploma.

Preliminary statistical analyses have been carried out. The qualitative analyses were carried out using descriptive statistics. Than, after verifying the correlations between the measured dimensions, multiple regression analyses were conducted to investigate the association between the presence of persistent nausea and vomiting during pregnancy and anxious and depressive symptoms post partum. All statistical analysis were performed with SPSS software (Version 25.0).

Descriptive analyses were carried out in order to analyze the information obtained on the health of mothers and pregnancies. Table show the information about pregnancy and mothers' history.

In order to verify the presence of correlations between nausea and vomiting symptoms during pregnancy and anxious and depression symptoms post partum, Pearson correlation analysis were carried out. As shown in Table , Vomiting was associated with State Anxiety (r = .50; p < .001), Trait Anxiety (r = .61; p < .001) and with EPDS Total Score (r = .55; p < .001).

The present study aimed to assess the associations between NVP during pregnancy and presence of post-partum depressive and anxious symptoms, when children aged between 3 and 6 months.

We assume that vomiting is a psychosomatic manifestation of intrapsychic malaise, which can lead to subsequent anxious/depressive symptoms. Indeed These results allow us to evaluate possible risk factors and to activate prevention programs for postpartum depression during pregnancy.