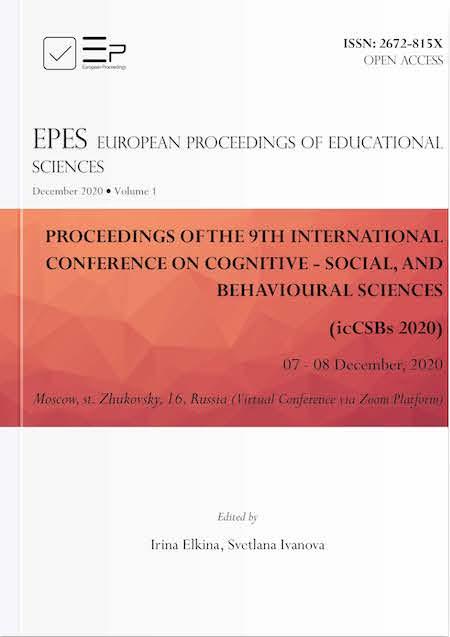 Sustainable Development And Education In The Conditions Of The Uncertain World

A rapidly changing society creates uncertainty about the future of humanity; it affects the state of society and the processes taking place in it, including education development. Now the question about the direction, which the society will develop, and the role of education in this process becomes especially important. Politicians, sociologists, philosophers concern about the respond of humanity to global challenges and risks; the issue of sustainable development of society becomes relevant and topical. Modern pedagogy tries to comprehend these problems, developing ideas about teaching approaches, by searching for the new pedagogical technologies and teaching methods. At the same time, it is no longer possible to ignore the transition to post-industrial society in pedagogical research, however, attempts to comprehend and justify the changes are made using the existing methodology relating to the modern era. Postmodern ideas only begin to be reflected in the concepts of education in the modern world.

A rapidly changing society creates uncertainty about the social, economic, demographic, and environmental future of mankind; this uncertainty about the future affects the state of society and the processes taking place in it, including the development of education. The question of what society will be like in the future is always important, but now, owing to the timing of all processes, their incredible acceleration, and increasing uncertainty, this issue becomes especially acute.

Political scientists, sociologists, philosophers, people who determine public policy in various fields, international organizations express concern whether the mankind is able to withstand the global challenge to its very existence. It is not surprising that the issue of sustainable development of society is relevant. In the field of education, the term “education for sustainable development” has already taken root not only in the UN and UNESCO documents. However, it has already been accepted in the pedagogical community and is the subject of discussion in the context of global competencies, skills of the 21st century, environmental culture, etc.

The modern philosophy of education is trying to comprehend these problems, developing ideas about approaches to learning in education, being in search of new pedagogical technologies, teaching methods and techniques, trying to take into account the state of society, the characteristics of educational space and time. In pedagogical research, the influence of post-industrial society on education has been declared (Ivanov & Ivanova, 2016; Novikov, 2011), however, attempts to comprehend and justify the changes that are taking place are made using the existing methodology related to the modern era (modernity), when ideas about learning in an industrial society were actively developed. For quite a long time, postmodern ideas are reflected in education in the USA and Western Europe (English, 2003; Jacobs, 1994; Kincheloe & Steinberg, 1999; Slattery, 2013). This is reflected in the fact that theorists and practitioners in the field of education recognize the need to respond to new claims of society and reflect them in the search for new approaches, changing the content and organization of the educational process, management, etc. The ideas of postmodern philosophers begin to be reflected in Russian pedagogy and philosophy of education (Bokova, 2017; Dmitriev, (n.d.); Emelin, 2000; Garifullin, (n.d.); Ivanova, 2017; Kolesnikov & Sokolova, 2016; Smakotina, 2017; Sorina, 2017; Volkov, 2017). Indeed, the problem is that the tools that have proven themselves in pedagogy in an industrial society continue to be applied without taking into account the changes in modern society, but there is such a state of the real economy that these attempts to update the content of education and approaches to learning are weakly “built in” educational process in modern times.

Dugin (2009) states that unlike the classical model that places an event in time, postmodernists put time in an event. More precisely, this thought sounds to Ivanov and Ivanova (2016), who speaks about a deep contradiction of the modern post-industrial era. She describes the situation in a postmodern society that a condition set is achieved by standardized means, accessible to time and place, but not suitable to achieve a positive result. In other words, if space is built without considering the time (era) and conditions (state) of objects and subjects, filling it, then it is not necessary to expect its successful formation.

What is the feedback of education to the uncertain social conditions?

What are the ways to respond to the challenges of the time?

The aim is to show the potential of education in the world of uncertainty.

The author uses the methods of analysis of the texts; the comparative analysis.

The author analyzes several postmodern concepts, which are associated with ideas about the development of society, the interaction of man and society, the state of education in the face of uncertainty.

So, analyzing the work of Deleuze and Guattari (2008) “Capitalism and schizophrenia” it is important to pay attention to how they show the interaction of man and society. They represent the concept of “body without organs”, a changing social array of desires. For each case, its body without organs is formed, depending on the individual desires of everyone, while the desire is looking for new forms and various combinations for its realization (“Anti-Oedipus”).

The concept of a rhizome (Deleuze & Guattari, 2008) is combined with the concept of a body without organs as a method of developing space, both physical and the space of something in a figurative sense (for example, content in education). Rhizome has certain characteristics, among which the authors conceptualize cartography as an activity shown by a nomad in the development of the surrounding world. The activity of the subject is the key to its further development. However, the state of the body without organs (a synthesis of constantly changing circumstances, connections, desires) is relevant, unique, and stable here and now, constantly changing - this is where the instability of society manifests itself.

Carrying out a “new analysis” of social processes (schizoanalysis), G. Deleuze and F. Guattari express the idea that the authorities always strive for ordering, which becomes a paranoid desire to build hierarchies and structure. The masses (embodying the unconscious, the element, “schizophrenia”) are opposed to the state order and should be organized into “nomadic streams” (as cited in Dugin, 2009) with special schizophrenic epistemology (hence schizoanalysis). In the vision of the authors, there arises a different structure of the world - a smooth surface, the way the body exists without organs.

Dugin (2009), continuing the thoughts of Deleuze and Guattari and projecting them onto the world of the Internet, believes that the surface is an environment where the corporeal has practically ceased to be corporeal and the rational has not yet become rational, but it is about to become, and there is a place for a rhizome, a global network rhizome that lives and spreads across the limitless horizontal of the screen. In this rhizomatic world of the surface, called Deleuze “the thousand plateau”, the main processes take place, the ontology and epistemology of postmodern are located in it (as cited in Dugin, 2009, p. 215).

Nomad always builds his own map of the area, moving in the space of rhizomes, he can create his own world and time, determining his being “playing on the folds and wrinkles of the screen surface” Dugin, 2009, ibid.)

Lines, folds, nodes - these are places where energy is collected, something new is formed, different from the “mass” of consumers that make up the surface, the “screen”. The fact that these folds exist, that they are formed, is a sustainable process, but what they are, it is impossible to predict in advance.

Returning to the topic of sustainable development and education: accepting the concept of Deleuze and Guattari, we can agree that what is sustainable with modern society is the fact that the world is unstable. It is necessary to prepare the subject for such a situation as part of the educational process in the existing society. This willingness to be an active subject, responsible for one’s own lifelong learning, able to apply the acquired knowledge and skills in new, unfamiliar conditions, corresponds to the idea of “being nomad” in the vocabulary of Deleuze and Guattari (2008).

Modern education researchers focus their attention on the active position of the subject of the educational process (the topic of leadership in the broad sense becomes urgent in modern studies). They determine the characteristics of the leader, his ability to set goals, work with the team, bear responsibility for the result of his activities and the activities of the team, etc. Here we can draw an analogy with what we call functional literacy in the terminology of domestic research, which includes, among many important mental skills, the skill of conscious work with space (here we mean the educational space, which includes not only the subject, physical space, but also the subject’s activity in this space, which again correlates with the ideas of Deleuze and Guattari about the development of the surrounding space by the nomad).

It is also a responsible attitude to the environment, manifested in caring for the future, about environmentally sound relationships with nature. Here we should talk about global competencies that are part of functional literacy and the formation of which is also the concern of modern education.

The uncertainty and instability inherent in the modern world, “provokes” the individual to show non-standard ways of living in it. However, everything that concerns the personality of a person living in these “unstable” conditions has a completely different vector, aimed not so much at acquiring his own stable position in the struggle against difficult external changing conditions, but at mastering the skill of flexible adjustment to a changing situation while maintaining internal stability and sustainability of life values. This is due to lifelong learning for a person. This means that postmodernism proposes to construct in the dialogue mode a constantly updated reality of education, being in a process that does not have a framework, end and results (Ivanova, 2017). This is true for education as well.